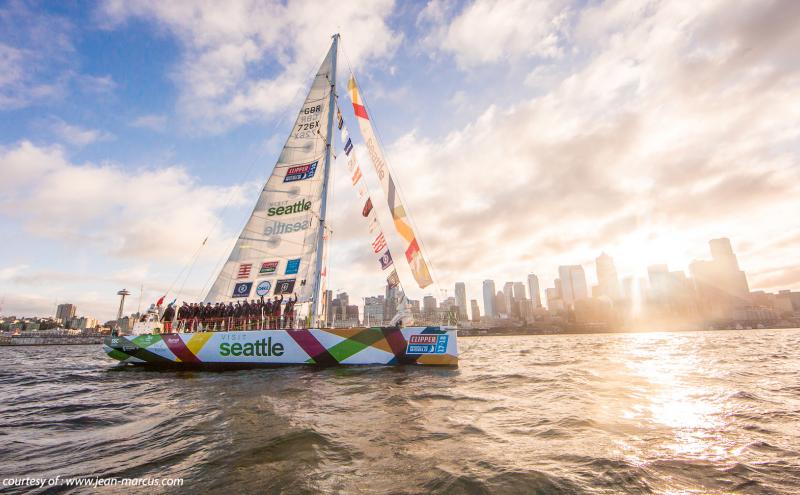 When the Clipper 2017-18 Round the World Yacht Race departs Seattle for the penultimate leg of its 40,000 nm circumnavigation of the planet, it will be engaging in pioneering scientific research. One of its racing yachts, Visit Seattle, was fitted with a special sensor Monday, for monitoring the effects of ocean acidification around the US Coast.

The Clipper Race is working with the Port of Seattle, National Oceanic and Atmospheric Administration (NOAA) - an agency within the US Department of Commerce – as well as the University of Washington, Sunburst Sensors and Visit Seattle to raise public awareness of its Ocean Acidification Program, which studies changes in ocean chemistry in response to increasing carbon dioxide (CO2) in the atmosphere, associated with climate change.

Clipper Race Chairman, Sir Robin Knox-Johnston, the first man to sail solo, non-stop around the world almost 50 years ago, said: “This collaboration presents a unique opportunity for all involved to use a sport we love to research a subject we all care deeply about, our oceans.”

Visit Seattle, one of the Clipper Race’s eleven identical 70 foot ocean racing yachts, has been fitted with a Sunburst sensor, the recent winner of a $2 million XPRIZE ocean health award. The sensor will monitor ocean acidification during the 6,000nm US Coast to Coast leg of the race.

Port of Seattle Commissioner, Fred Felleman, who initiated the effort, spoke about the importance of monitoring the waters around the North American coast, saying: “Pacific Northwest waters are particularly vulnerable to ocean acidification - impacting numerous species of ecological and economic importance, from plankton to pollock, oysters to orcas. It also impacts are tenants at Fishermen’s Terminal who are an essential part of Seattle’s cultural fabric and economic diversity.

This collaboration with the Clipper Round the World Yacht Race expands the reach of current monitoring efforts and provides a spectacular platform to take this important message to a global audience.

“Having the Visit Seattle boat as the lead vessel for such innovative research is a very exciting prospect and one the Port is extremely proud to support.”

The race departs Seattle on 29 April and heads to New York via the Panama Canal. This route will fill a vital gap in the current Global Ocean Acidification Observing Network (GOA-ON) as it’s a route never before monitored by the NOAA.

Dr Richard Feely, Senior Scientist from NOAA, explains: “Ocean acidification is occurring because our ocean is absorbing carbon dioxide from the atmosphere, leading to lower pH in the surface and subsurface waters. This is causing fundamental change in the chemistry of the ocean from pole to pole. It poses a threat for the oceans and the marine organisms that live within it; from the smallest, single celled algae to the largest whales.”

Not only does ocean acidification endanger ocean and marine life, the wider affect is the interference of a global seafood ecosystem which provides the primary protein source for two billion people around the world, and is an industry which generates billions of dollars for businesses around the US Coast.

Dr Jan Newton, Senior Principal Oceanographer at the University of Washington, was present at the sensor’s fitting and spoke about how ocean acidification particularly affects the economy of Washington State, saying: “The additional CO2 causing ocean acidification, can be harmful to developing shellfish. By monitoring our local marine waters, we can tell the nearshore growers when high CO2 waters are near.”

In Washington State alone the shellfish industry supports about 3,200 jobs and generates about 270 million dollars in economic activity annually, meaning that political support for doing something about carbon emissions and acidification in the Pacific North West has particularly increased in recent years.

Pete Knutson, long-time commercial salmon and halibut fishermen owner of Loki Fish Company and tenant at Fishermen’s terminal said, “Now more than ever, our fishing communities are concerned with ocean health and support important monitoring efforts like this project.”

The Clipper Round the World Yacht Race is known as one of the toughest endurance challenges on the planet and is the only event of its kind which trains amateur sailors to become ocean racers. Only the Skipper on board each of the eleven teams is professional.

Amongst the 712 crew members competing in the entire race who come from all different walks of life and over 40 different nations, the United States is the fourth highest represented nationality.

The US Coast to Coast Leg is the seventh of eight legs which make up the global race route. Team’s will depart Bell Harbor Marina in the Port of Seattle on 29 April and are expected to arrive into New York sometime between 14 and 16 June.

Since the Clipper 2017-18 Race started in Liverpool, UK, last August, the fleet, including the Visit Seattle team, have raced via Uruguay, South Africa, Australia, and China. Following completion of this US Leg, competitors will race across the Atlantic Ocean to Derry Londonderry, Northern Ireland before a final sprint back to Liverpool where the epic adventure concludes on 28 July 2018.

To download high-res video and images of the Visit Seattle team in action as well as supporting scientific documents, click here: https://www.dropbox.com/sh/hmvgqyftvxtuhwx/AAATTuGh-wCizStOeI0e9YVoa?dl=0

Founded in 1911, the Port of Seattle is a special-purpose government serving the citizens of King County. The port is committed to creating opportunity for all, stewarding our environment, partnering with surrounding communities, and promoting social responsibility.

Fishermen’s Terminal, the Port’s first facility, is now home to the North Pacific Fishing Fleet. The Port led this collaboration because it recognizes ocean acidification as a global threat to the entire marine food web that also has immediate impacts on our tenants. Today, more than a billion people worldwide rely on food from the ocean as their primary source of protein. Many jobs and economies in Washington and around the world depend on healthy oceans that populations of fish, shellfish and people need to survive.

The Port of Seattle is proud to collaborate with Clipper and others to elevate public awareness of the importance maritime innovation plays in support of a sustainable sea.

The Clipper Race – A Global Platform for Pioneering Research

The Clipper Round the World Yacht Race is one of the world’s toughest endurance challenges – an eleven-month, 40,000 nautical mile sailing adventure around the planet for everyday people made up of eleven 70-foot yachts, including a team represented by the Port of Seattle-sponsored Visit Seattle yacht. The yacht will be fitted with a Sunburst pH sensor to monitor the effect of ocean acidification.

This route down the west coast of the United States through the Panama Canal and up the east coast is one that has not been monitored for pH by NOAA before. The new data will contribute to the growing body of scientific evidence and promote a better understanding of the effects of ocean acidification to a global audience. NOAA and UW participate in the Global Ocean Acidification Observing Network (www.goa-on.org) which seeks to document the status and progress of ocean acidification world-wide in order to better understand ecosystem responses and inform societal adaptation strategies.

NOAA is an agency within the US Department of Commerce. Its Ocean Acidification Program seeks to better prepare society to respond to changing ocean conditions and resources by expanding understanding of ocean acidification, through interdisciplinary partnerships, nationally and internationally.

The Washington Ocean Acidification Center serves the entire state from its base at the University of Washington. Created in 2013, the Center connects researchers, policymakers, industry and others in Washington to advance the science of ocean acidification and provide a foundation for developing strategies and policies to protect marine ecosystems and the people connected to them.

Visit Seattle has served as the official destination marketing organization (DMO) for Seattle and King County for more than 50 years. A 501(c)(6) organization, Visit Seattle enhances the economic prosperity of the region through global destination branding along with competitive programs and campaigns in leisure travel marketing, convention sales and overseas tourism development. Nearly 40 million annual visitors spend $7.4 billion in the city and county each year. The economic power of travel and tourism generates more than 76,000 Seattle area jobs and contributes $762 million in annual state and local tax revenue. Go to www.visitseattle.org.

The XPrize-winning Sunburst Sensors design and manufacture autonomous sensors that measure the sea water pCO2 and pH using patented drift-free technology. The AFT - Autonomous Flow Through sensor - is small and affordable enough to conduct flow through measurements on a variety of vessels of opportunity. The device was installed on the Visit Seattle Yacht on April 23 while in Seattle and will be removed from the yacht when it arrives in New York in mid-June. The data will subsequently be analyzed by scientists at the UW and NOAA.