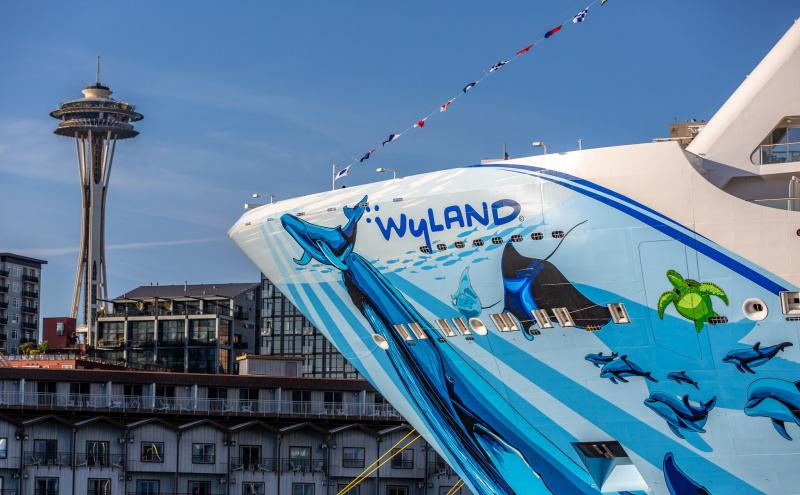 Beginning with the arrival of the Norwegian Bliss on May 30, Seattleites will soon get used to spotting a new type of marine life — the humpback whales painted on the ship’s hull by the artist Wyland. Not only are humpback whales an iconic element of the Alaska scenery, they’re also a reminder of Norwegian Cruise Line's (NCL) commitment to preserving the conditions of the oceans. The Port of Seattle is particularly interested in sustainability, so we looked into NCL's Sail & Sustain global environmental program.

According to the report, Norwegian Cruise Line Holdings is committed to:

Other waste management initiatives include donating ship furnishings to the Salvation Army rather than disposing of them, and recycling metal from retired onboard equipment.

Vessels within the Norwegian Cruise Line Holdings fleet produce the majority of the water used onboard and have reduced their overall water consumption by 2.7 percent, as compared to 2015.

In 2017, the water sources on the company’s fleet came from the following sources:

The cruise line collects data from every ship to measure the biggest centers of power consumption. A few energy conservation highlights from 2017 include:

The Port of Seattle will welcome Norwegian Bliss, the newest ship in the Norwegian Cruise Line fleet, the early morning of Wednesday, May 30. At over 168,000 gross tons and a capacity of 4,004, double...

The Port of Seattle is proud to be the largest and fastest growing cruise market on the West Coast. For the past 14 years the Port has prioritized protecting the environment while growing into a nearl...