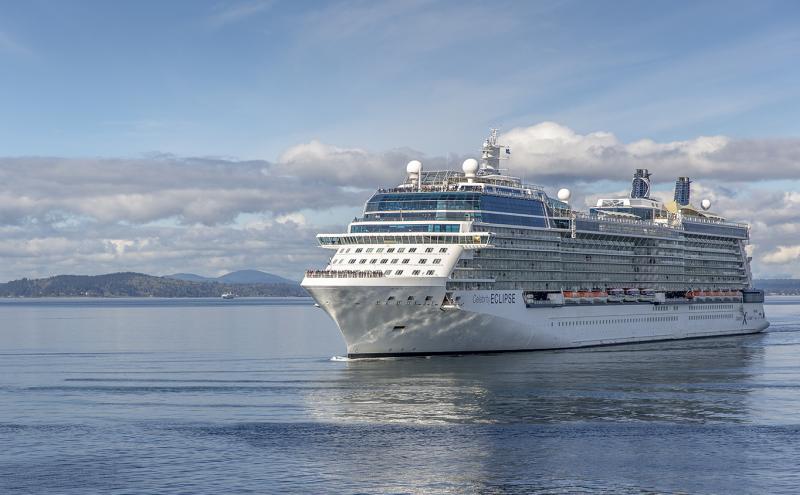 SEATTLE — The Port of Seattle, celebrating 20 years as a homeport, welcomes the 2019 cruise season with the arrival of the first ship—Celebrity Eclipse, at the Bell Street Pier Cruise Terminal at Pier 66. The results of a new economic impact report show that the cruise business creates nearly $900 million a year in local business revenue, with each homeport ship call contributing an average $4.2 million to the state’s economy, and supporting over 5,500 jobs.

Cruise vessels made port-of-call stops in Elliot Bay prior to the Port building a home port cruise terminal. Regularly scheduled cruise service began in May 2000 with a long-term commitment from Norwegian Cruise Line, beginning a partnership that lasts to this day.

“Over twenty years ago this community turned a novel idea into a nearly $900 million industry and helped the Port become the most environmentally progressive home port in North America,” said Port of Seattle Commission President Stephanie Bowman. “Today that economic opportunity reaches all the way from Eastern Washington farms and ranches that provide food for cruise customers, to King County attractions that depend upon summer season travelers to support year-round activities. Alaska cruises are a ‘bucket list’ item for people all over the world, and we look forward to hosting them for decades to come.”

The Port expects an estimated 1,208,590 revenue cruise passengers this year, breaking last year’s record of 1,114,888. This year, the Port of Seattle will host the three largest cruise vessels on the West Coast, leading with the addition of the Norwegian Joy, and the return of its sister ship, Norwegian Bliss, both of which carry upwards of 4,000 passengers, and culminating with the arrival of the Royal Caribbean Ovation of the Seas — with 4,180 passengers — which will be the largest cruise vessel on the West Coast this season.

“We helped the Port become the first homeport in North America with two berths powered by clean energy. It was a real breakthrough in terms of innovation, and the unique design we built became in demand all over North America,” said Mike Watts, Vice President at Cochran Marine. “Seattle’s ambition to aim for higher sustainability standards created unexpected revenue opportunities for our local business and improved air quality for other cities.”

“Maritime industrial jobs form the foundation for our region’s middle class,” said International Longshore and Warehouse Union President Rich Austin. “Seattle has been smart to maintain jobs on our working waterfront. Figuring out how cruise, cargo, and other maritime uses can work together in our harbor sets the next generation of maritime workers up for success.”

“Cruise season is by far the busiest time of year for us and the benefits of those sales support businesses in three different counties,” said Jon Gores, Sales Manager at Pike Brewing. “We buy barley in Skagit County, hops in Yakima, and brew beer here in King County. We make significant sales both onboard cruise vessels and to cruise tourists who visit our brewery in Pike Place Market. Those cruise sales extend business revenue nearly all the way across our state.”

“For a growing number of cruise passengers, Alaska is just part of the journey,” said Woodinville Wine Country Executive Director Sandra Lee. “Working with travel agents to promote ‘cruise and stay’ packages has led to thousands of passengers taking trips out to Woodinville Wine Country. Our local wine businesses are also marketing heavily to cruise ships to bring that Washington experience on board with local wines and varietals.”

Highlights from the economic impact report, prepared by local firm Community Attributes, include the following:

Port of Seattle Commissioners also approved the Port Valet program last month, which allows cruise passengers to have their bags taken from the ship and transported directly to their airline before departing for Sea-Tac International Airport. Passengers also receive their airline boarding pass before leaving the ship. This will be the third year the popular program will be in place, which has significantly improved the operational efficiencies of processing cruise passengers at both the seaport and at the airport. The reductions in congestion and passenger wait times have also improved the Port of Seattle’s ability to process larger cruise ships. Learn more about Port Valet.

The Port of Seattle is exploring the development of a new cruise facility at the north berth of Terminal 46 and is seeking a partner to support co-investment into the terminal and to operate the facility once construction is completed. As the Northwest Seaport Alliance works to realign international maritime cargo operations with the Terminal 5 Modernization Program, this creates room on Terminal 46 to build a new cruise terminal co-located with other marine cargo. Learn more at www.bit.ly/cruiseRFQ.

The Port of Seattle operates the most environmentally progressive homeport in North America. Through commitments to clean water and clean energy, the Port and its partners continue to emphasize healthy communities and habitats in and around our working waterfront. At the new cruise terminal, the Port will incorporate leading-edge environmental stewardship and sustainability practices that exceed existing regulations through strategies like clean shore power and clean water agreements. The Port is committed to installing shore power at the new cruise facility at Terminal 46.