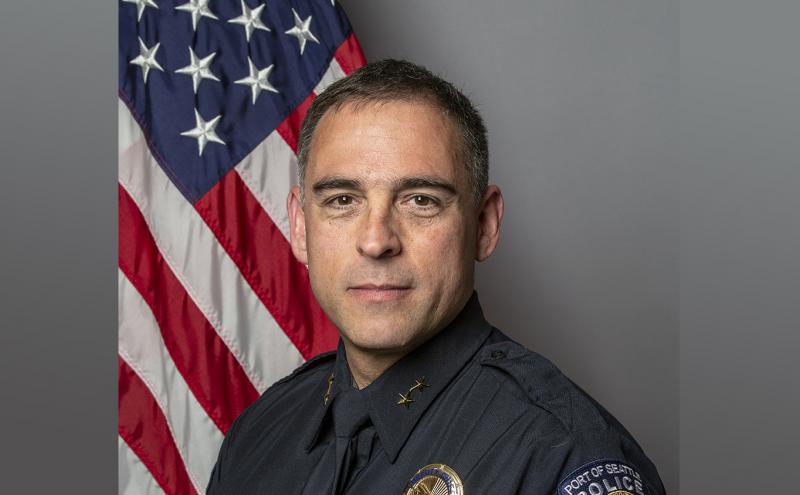 Port of Seattle Executive Director Steve Metruck announced today the selection of Interim Police Chief Michael Villa for the permanent post of Chief of the Port of Seattle Police Department.

Chief Villa joined the Port Police Department as Deputy Chief in 2017 after a long career with the Tukwila police department. Villa has served as Interim Chief of the Port police force since October 2021.

Chief Villa was selected following an extensive review process, which included a national search, a Stakeholder Advisory Panel formed from industry and community partners, diverse internal hiring panels, and a virtual public forum where finalist candidates responded to questions submitted by the community.

“Chief Villa comes to this role with decades of leadership and partnership experience in South King County and at our Police Department,” said Port of Seattle Executive Director Steve Metruck. “As acting and interim chief, he demonstrated vision and integrity as he guided the department through our extensive internal assessment, multiple legislative police reforms, increased transparency through publication of the department’s annual reports, and a CALEA (Commission on Accreditation for Law Enforcement) recertification. He led the department during our initial response to the COVID-19 pandemic and, in its aftermath, some of the most challenging safety, health, and well-being conditions our community has ever seen. His emphasis on transparency, partnership, team building, and continuous improvement has kept the department heading in the right direction. Those traits are important for ensuring the safety and security of our Port facilities. We are incredibly grateful to our officers and non-commissioned staff for their professionalism and continuing commitment.”

Chief Villa has a long history of working with area law enforcement agencies. While at the Port, Villa has implemented crime reduction initiatives, aided Police Department assessment efforts, created a crisis coordinator and health professional positions to aid persons in crisis, and created new partnerships to provide for more efficient access to jails when needed.

“I want to recognize the members of our community, industry groups, and employees who participated in the search process by offering your feedback and observations,” said Port of Seattle Commissioner Toshiko Hasegawa. “Transparency and responsiveness to the public are critical elements in building public trust in policing and government. I look forward to continuing to build that trust alongside Chief Villa.”

“I am honored to continue leading the Port of Seattle Police Department,” said Police Chief Michael Villa. “I am so proud of everything our department has accomplished, particularly over the very difficult last few years. We will continue striving to maintain trust with our stakeholders and make our community even safer. I have so much confidence in our department and admiration for our staff. I am very excited about the opportunity ahead.”

Chief Villa comes to the role with a 30-year background in law enforcement, starting at the Tukwila Police Department in 1990, where he was named Chief in 2011. Villa brings a long history of community policing and problem-solving to his role, along with technical expertise. At Tukwila, he launched community programs and opened a neighborhood resource center, led the development of a school safety initiative that upgraded video cameras and improved access security.

“I’ve had the privilege of knowing Chief Villa since he was a Commander with the Tukwila Police Department,” said Washington State Patrol Chief John Batiste, himself a former Port of Seattle Deputy Police Chief. “He is an excellent collaborator whose decision-making always places the public and agency personnel’s best interest first.”

The Port Police Department is currently authorized with 130 commissioned police officers along with over 40 non-commissioned personnel. To carry out its first-responder responsibilities, the department operates a full range of police services, including criminal investigations, a 911 communications center, bomb disposal, K-9, and dive-team units.