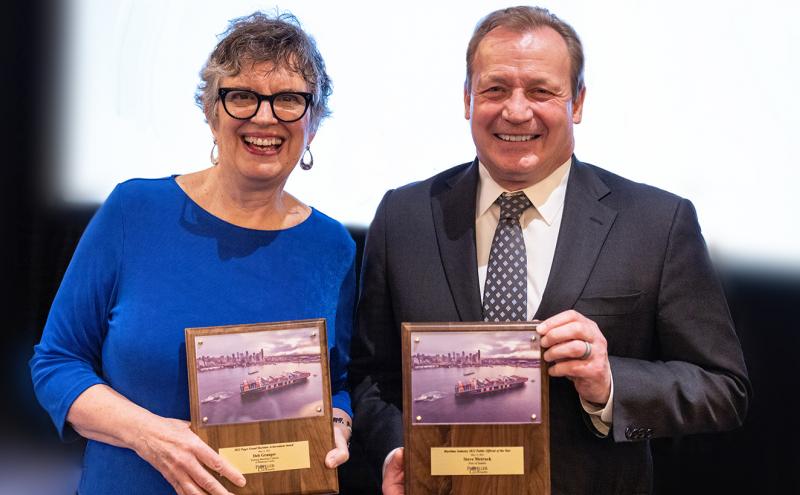 Port of Seattle Executive Director Steve Metruck was named Puget Sound Maritime Public Official of the Year, and Debbie Granger, long-time member of the Working Waterfront Coalition of Whatcom County, was presented the annual Puget Sound Maritime Achievement Award during the annual Seattle Maritime Day Breakfast, which was sponsored by the Seattle Propeller Club and Port of Seattle and presented by Crowley.

“Both Steve and Deb have been tireless advocates for the working waterfront and their passion, leadership and energy have contributed immensely to the success of our region’s maritime industry,” said Tosca Pinder, President, Seattle Propeller Club and Associate Vice President, Property and Casualty, Maritime at Newfront.

“In his four years as Executive Director, Steve has brought to bear his decades of maritime experience and his outstanding leadership qualities to build a shared vision with the Port Commission to create a stronger, more sustainable regional economy,” said Port of Seattle Commissioner Toshiko Grace Hasegawa, who announced the award. “Clearly, his service has made a significant and lasting contribution to maritime commerce in the Pacific Northwest.”

With 34 years of distinguished service in the United States Coast Guard, and four years at the helm of the Port of Seattle, “Steve has played a key role in building a stronger, resilient, and more competitive Port, creating jobs and economic opportunities throughout the region,” Hasegawa said.

Hasegawa noted that “Steve led the Port through the unprecedented challenge of the COVID-19 pandemic, ensuring no interruption of essential aviation and maritime operations and moving ahead with critical capital construction. He has built a solid partnership with the Port Commission to advance the Port as an engine for sustainable and equitable economic development.”

Pinder said the Seattle Propeller Club’s Public Official of the Year Award recognizes the contributions and support of a local, state, or federal policymaker who has demonstrated leadership, understanding, and appreciation of the maritime industry. Pinder added that the Puget Sound Maritime Achievement Award recognizes the Club’s “person of the year” for their contribution to enhancing the vitality of our working waterfront.

Debbie Granger is a long-time member of the Working Waterfront Coalition of Whatcom County with highly visible contributions throughout the community. Jim Kyle, President of the Coalition, who presented her award, commented, “Debbie’s work has been essential to the success of our organization. Her knowledge and work ethic set a remarkably high bar.” Her many accomplishments include establishing Bellingham SeaFeast as a signature waterfront and seafood festival celebrating Whatcom County’s maritime culture, helping launch Bellingham Dockside Market as a hub for local fishermen to provide direct seafood sales out of Squalicum Harbor, and extensive fundraising efforts to support a new Fisheries and Aquaculture Center for Bellingham Technical College.

Granger has worked in education, fish processing, public relations, marketing, fundraising, and event management. Her last full-time job was with the University of Washington, where she managed a 12-state aquaculture research consortium. After “retiring,” Debbie and her husband Pete, a commercial fisherman, returned to Whatcom County where they continue to fish with salmon reefnet gear off Lummi Island. She is currently working to establish a Northwest Maritime Apprenticeship Program to help meet the shortage of qualified employees in the marine trades industry.

Debbie is one of only three women to have won the Puget Sound Maritime Achievement Award since its inception in 1951.