Port Expands its Efforts to Support Immigrants and Refugees 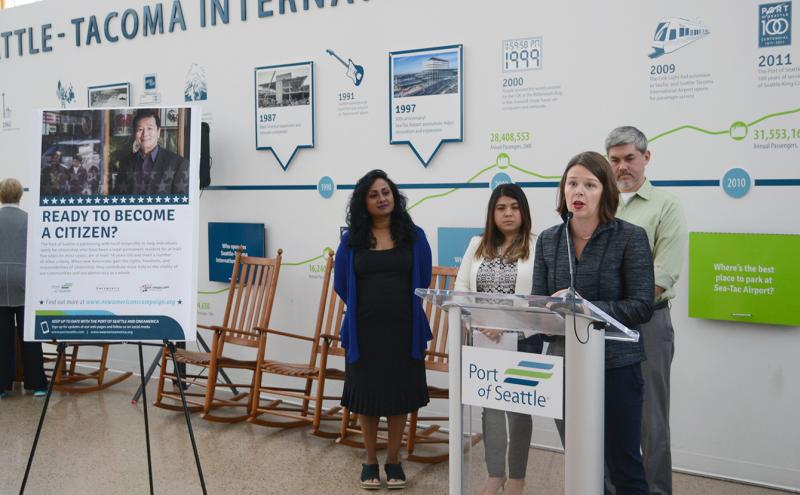 In celebration of National Citizenship Day, the Port of Seattle today announced new partnerships with One America and World Relief to support local immigrant and refugee populations traveling through Seattle-Tacoma International Airport (Sea-Tac). These new programs will facilitate the arrival of international refugees to the region and encourage eligible legal permanent residents to apply for U.S. citizenship.

“The Port is pleased to partner with the New Americans Campaign to encourage eligible legal permanent residents to apply for citizenship and provide support to achieve that goal,” said Courtney Gregoire, Port of Seattle Commission President. “The Port of Seattle is proud that so many foreign-born residents start their U.S. career at Sea-Tac and we have demonstrated our commitment to being a welcoming and inclusive Port. Citizenship provides an opportunity for immigrants who contribute so much to our nation to more fully participate and benefit from our American community.”

Adding a local angle to a national “New Americans Campaign,” the Port will place ads promoting citizenship throughout the airport and broadcast English and Spanish language public service announcements on Sea-Tac video monitors. In addition, you may find New Americans Campaign materials in Chinese, Spanish, and Vietnamese. The Port’s partnership with World Relief will allow refugee resettlement case workers to more easily meet refugees at their arriving flights, and help them transition to their new lives in the Puget Sound region. The Port plans to expand this partnership to other local refugee resettlement organizations as well. Earlier this year, the Port Commission passed a Welcoming Port policy to ensure the safety, inclusion and engagement of immigrant, refugee residents and foreign visitors in our region. The Port relies on thousands of foreign-born residents to provide world-class service at our airport and seaport and the trade-related industries that keep our economy thriving.

“We are excited to partner with the Port of Seattle to implement the New Americans Campaign in Seattle,” said Rich Stolz, Executive Director of One America. “The statement the Port is making with these partnerships reflects our region’s commitment to being a welcoming community for immigrants, refugees, and international travelers. By promoting citizenship, the Port of Seattle is also reinforcing an important message: immigrants are already contributing to our nation, and by becoming citizens, they will have the opportunity to benefit from and participate fully in our community and society. In so many ways, becoming a citizen is the most important means by which immigrants can protect themselves and their families at a time when our federal government appears willing to do anything it can to discourage immigration and international travel to the United States.”

"Refugees bravely leave behind everything familiar to seek safety, a life free from fear, and the chance for a new start," said Chitra Hanstad, Executive Director of World Relief Seattle. "We envision every refugee and immigrant who arrives through Sea-Tac Airport welcomed by community, rooted in community, and empowered for community."