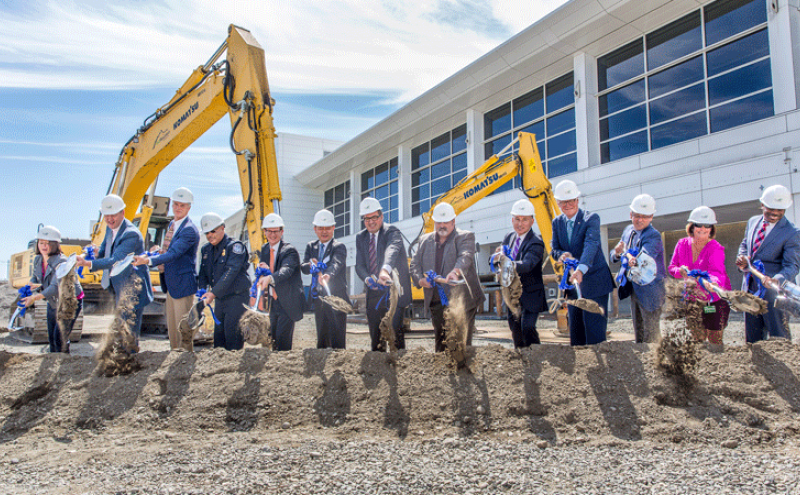 New Facility Scheduled to Open in Fourth Quarter of 2019

SEATTLE – National and local leaders came to the Port of Seattle today to celebrate the official groundbreaking for a new International Arrivals Facility (IAF) at Seattle-Tacoma International Airport. The new facility will dramatically improve the experience for international travelers and better meet the region’s demand for business and tourism-related international service.

Scheduled to open in late 2019, the new 450,000-square-foot, multi-level facility will be built to the east of the current Concourse A. An iconic aerial walkway, which will span 900 feet across and 85 feet above the existing aircraft taxi lane, will carry arriving international passengers from the South Satellite across the top of Concourse A to the Customs and Border Protection inspection services in the new IAF.

“Sea-Tac will deliver faster and better service to our international passengers, responding to the region’s demand for business and tourism travel. International travelers tend to stay longer and spend more,’’ said Commissioner John Creighton. “Through modernization initiatives at the airport, we are supporting a stronger regional economy that creates local opportunities and jobs. The Commission is committed to ensuring local communities and businesses have the best chance to seize those opportunities.”

“The International Arrivals Facility we are breaking ground on today will build upon our region’s global competiveness and ensure that Washington State continues to meet the demands of the growing international economy,” said U.S. Rep. Adam Smith. “When the IAF is completed, this facility will support our transportation infrastructure, strengthen local tourism and service industries, and preserve our commitment to sustainability, all while investing back into our local communities."

“The Port of Seattle is creating the world-class international terminal our region needs as a prominent and growing leader in global commerce and trade,” said King County Executive Dow Constantine. “Sea-Tac will now better connect local entrepreneurs and international travelers to the best opportunities available around the world.”

National and international airlines also expressed their support for this exciting project.

“The new International Arrivals Facility is a critical infrastructure investment that will make Seattle a true global gateway and will serve the people of the Puget Sound region for decades to come,” said John Caldwell, Delta Air Lines’ Vice President – Seattle. “With nonstop service to 16 international destinations in Europe, Asia, Mexico and Canada, Delta is the largest operator of international flights at Sea-Tac. We have worked closely and in partnership with the Port of Seattle over the last three years to help bring this vision to life and look forward to 2019 when our customers will experience the world-class facility they deserve.”

“Improvements to this facility mean a better travel experience for our guests and the millions more who visit our great city each year,” said Andrew Harrison, Alaska Airlines’ executive vice president and chief commercial officer. “With 300 departures a day, 60 percent of international passengers flying into Seattle connect onto an Alaska Airlines flight -- the equivalent of filling 12 Boeing 737s every day. With these new terminal enhancements, flyers arriving on our Global Partners British Airways, Emirates, Hainan Airlines, Condor and Icelandair will be able to speed through U.S. Customs and make their connections with time to spare.”

“Seattle is uniquely situated for trans-Pacific growth,” says Hainan Airlines President Jianfeng “Jeff” Sun. “June 2008, we pioneered our first nonstop service to the Western Hemisphere with Seattle. Since then many additional airlines followed in our footprints. It soon became apparent that the arrivals facility was simply not adequate to handle the demand for more capacity in terms of space, logistics and technology. The new terminal expansion has been needed for a long time and we anxiously look forward to when it’s ready to roll out the red carpet to our customers.”

“The IAF is another example of the great partnership between the Port of Seattle and the building trades, said Lee Newgent, Executive Secretary, Washington State Building Trades Council. “The Port understands that these kinds of construction projects create good living wage jobs, and they’ve worked closely with us to ensure that not only are their contractors collaborating with labor but that we set high labor standards that meet or exceed other local government projects.”

This spring, the Southside Regional Tourism Authority reported that travel spending in airport communities increased 4 percent from 2015 to 2016, including a $250 million uptick in lodging sales. The City of SeaTac alone has almost 70 percent of all lodging sales and – with more local hotels being built in the area – the trendline for increased revenue is headed upwards.

“Sea-Tac Airport is an economic engine for our region and the increased passenger totals are a driver for more jobs and benefits to business owners who rely on travelers,” said Katherine Kertzman, President & CEO - Seattle Southside Regional Tourism Authority. “With more than 1,200 new hotels joining the Seattle Southside region by 2018, more jobs will be created now and into the future and the airport is a big reason for this economic surge.”

The current budget for the IAF is $766 million. Funding for the project will come from a combination of airport generated revenues, passenger facility charges (PFCs) and revenue bonds. As with virtually all airport projects, no Port of Seattle levy taxes will be used to fund the project.

To view fly-through videos and images, and get more information on the details of the project, visit our International Arrivals Facility project page.

Including the new International Arrivals Facility project, the Port of Seattle is working on more than $3 billion in near-term Airport Projects planned to accommodate growth for the future including the North Satellite Modernization, baggage handling optimization and a 20-year Sustainable Airport Master Plan.

Operated by the Port of Seattle, Seattle-Tacoma International Airport (SEA, KSEA) is ranked as the 9th busiest U.S. airport, serving nearly 45.7 million passengers and more than 366,000 metric tons of air cargo in 2016. With a regional economic impact of more than $16.3 billion in business revenue, Sea-Tac generates 171,796 jobs (109,924 direct jobs) representing over $2.8 billion in direct earnings and more than $565 million in state and local taxes. Twenty-four airlines serve 83 non-stop domestic and 24 international destinations.