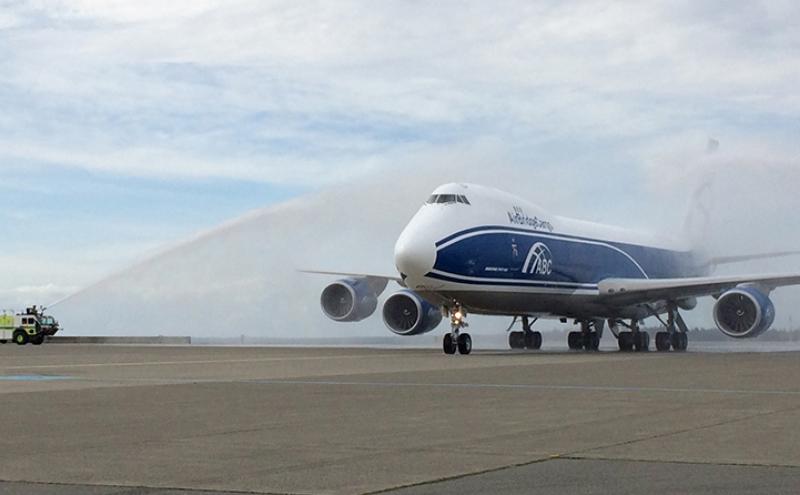 Port of Seattle Commissioner John Creighton led a group including executives from AirBridgeCargo and Boeing as they welcomed a brand new 747-8F freighter which was flown from the Boeing factory in Everett to Sea-Tac Airport so it can begin cargo service. The group held a briefing inside the plane to commemorate the service which recently began.

“Seeing an airplane made in Washington by skilled Washington workers fresh off the assembly line is always a thrill, and the Port of Seattle is proud to play a key role in the strong relationship AirBridgeCargo has with so many of our Pacific Northwest business partners,” said Port of Seattle Commissioner John Creighton. “AirBridge will expand Sea-Tac’s global reach with new direct freighter service to Moscow and Amsterdam. This service will be a boost to our regional economy as these new export options are now easily accessible.”

AirBridge is the scheduled freight arm of the Volga-Dnepr Group, which operates one of the world’s largest aircraft, including the iconic Antonov 124, that makes several visits to Sea-Tac each year. AirBridge has a strong connection to the Pacific Northwest economy, flying an all-Boeing freighter fleet, including the new 747-8F.

“We are excited to include Seattle in our network so we can provide our customers an even greater range of coverage options from the United States,” said Hendrik Falk, AirBridge vice president North and South America. “We expect our new Seattle service will be in high demand among customers active in a variety of industries including: aerospace, machinery, fish and seafood, food, to name just a few. We see how much Sea-Tac Airport has accomplished in support of cargo operators and infrastructure, no wonder that the airport is gaining a much more prominent profile for cargo operators, with AirBridgeCargo proud to be among them.”

AirBridgeCargo Airlines is part of the Volga-Dnepr Group, based in Moscow. AirBridge has an all-Boeing fleet of 18 freighters, 17 of which are various types of 747’s. The airline serves 24 destinations in 11 countries, linking Asia, Europe and North America through its multiple Moscow hubs. Air Bridge plays a key role in the economy of the Pacific Northwest, recently ordering 20 Boeing 747-8 freighters at the 2016 Farnbourough Airshow, which carry a list price of $7.4 billion. The company is also a major supplier of logistics support for Boeing.