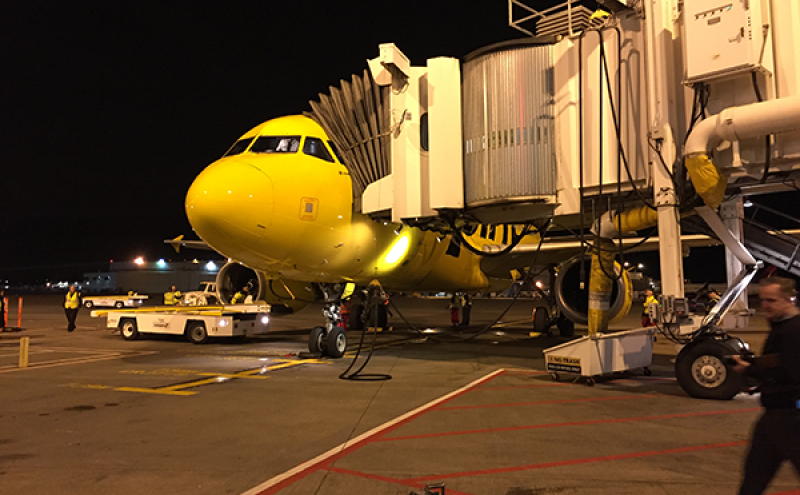 (SEATTLE) – The Port of Seattle welcomes the first new domestic airline since 2008 at Seattle-Tacoma International Airport with tonight’s inaugural flight of Spirit Airlines to Los Angeles. Travelers in the region will see with two daily nonstop flights to LAX and will add twice-daily service to Las Vegas beginning April 14, 2016.

“Spirit Airlines has a unique business model with their unbundled fare, providing customers in our region a new option of the ultra low-cost fare,” said Lance Lyttle, Managing Director of Sea-Tac Airport. “The opportunity to be a world-class airport also brings with it the need to broaden choices for our travelers. Spirit will do just that.”

Sea-Tac was the fastest growing large airport in the country in 2015, with nearly 13 percent growth from the previous year to a fifth straight passenger record of more than 42.3 million. Already through the first two months of 2016, Sea-Tac is seeing double digit growth continuing at nearly 10 percent.

“Seattle-Tacoma is the perfect new city to expand our growing network,” said Mark Kopczak, Vice President of Network Planning for Spirit Airlines. “Spirit’s super low Bare Fares™, with Frill Control™ allows customers to choose only those extras they want to pay for and gives them the most control over their travel budget. By saving on travel, our customers have more money left over for when they get to their destination.”

Spirit will be using A319 aircraft for the Los Angeles service and A320 aircraft for upcoming Las Vegas service. Spirit currently operates more than 250 daily flights to over 50 destinations within the U.S., Latin America, Caribbean and Canada.

Spirit Airlines (NASDAQ: SAVE) is committed to offering the lowest total price to the places we fly, on average much lower than other airlines, on average nearly 40% less* Our customers start with an unbundled, stripped-down Bare Fare™ and get Frill Control™ which allows them to pay only for the options they choose – like bags, seat assignments and refreshments – the things other airlines bake right into their ticket prices. We help people save money and travel more often, create new jobs and stimulate business growth in the communities we serve. Our Fit Fleet is the youngest, most fuel-efficient in the U.S. We operate more than 390 daily flights to more than 56 destinations in the U.S., Latin America and the Caribbean. Come save with us at www.spirit.com.

Operated by the Port of Seattle, Seattle-Tacoma International Airport (SEA, KSEA) is ranked as the 13th busiest U.S. airport, serving more than 42.3 million passengers and more than 332,000 metric tons of air cargo in 2015. With a regional economic impact of more than $16.3 billion in business revenue, Sea-Tac generates more than 171,000 jobs (109,924 direct jobs) representing more than $2.8 billion in direct earnings and $565 million in state and local taxes. Twenty-four airlines serve 81 non-stop domestic and 24 international destinations.