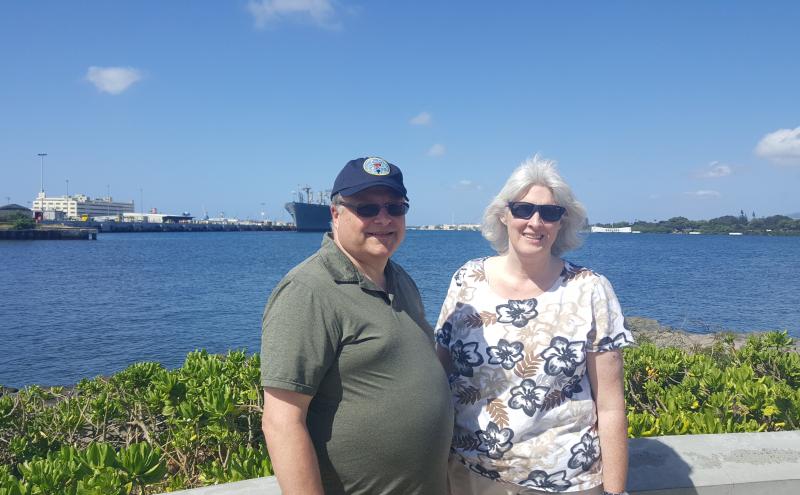 Each quarter, the Port celebrates employees who have reached a new five-year service milestone in their careers. Our Service Award Spotlight series seeks to highlight some of the longest tenured employees being recognized each quarter. Today we are spotlighting Duane Gibb, foreman at the Seattle-Tacoma International Airport (SEA), who celebrates 25 years at the Port. Congratulations Duane!

Back in high school, Duane was enrolled in an electronics class where he had repaired his first tube TV. After that first television repair, Duane continued to tinker around with and fix various electrical and electronic items. “I get the most satisfaction when I am able to make a successful repair.”

After hearing about the Port of Seattle from a co-worker at a prior employer, Duane was interested in working on different electronic systems that the Port had to offer. In December of 1995, Duane officially joined the Port as an Electronic Tech for the Satellite Transit System (STS), the automated train system that shuttles passengers between terminals. He later had the opportunity to do electronic maintenance for the entirety of the airport, with projects varying from camera systems, ID access door controls, to bag tag printers. After two years, Duane returned to the STS where he continues to maintain and repair the processors and controllers of SEA train operations. Currently, Duane is a Foreman who plans, assigns, and coordinates that work is completed safely between his crew and the other craft teams in STS maintenance. Duane notes that the best part of his job is having the work on complex automated and electronic systems in a large airport.

In the last 25 years, Duane has watched the airport grow from 21 million passengers to 54 million passengers annually. With the growth also came the expansion of the SEA parking garage, the rebuild of Concourse A, the teardown and rebuild of the central terminal, and the construction of a new office tower and international arrivals facility among many other airport projects.

Duane is most proud of his work with the Satellite Transit System (STS). In collaboration with Bombardier, his team converted the old STS passenger communication system to work with the new, hands-free STS train cars. It was challenging to install the new train system while keeping the old system in service to the airport. With innovative problem solving, the team was able to efficiently complete the refurbishment of the STS system under budget and earlier than scheduled. Completing this project left Duane feeling satisfied and excited to continue maintaining and repairing various systems at SEA airport.

Looking to the future, Duane is hoping to resume a normal sleeping schedule by bidding for a daytime shift rather than working the graveyard shift that he is currently scheduled for. While he waits for the opportunity and for his time to retire, Duane is grateful for the Port’s flexible schedules and PTO that allows him to spend time with and raise his family. While Duane is not working, he can be found flying (he has Private Pilot License) and serving as the Vice President of the Highline Amateur Radio Club.