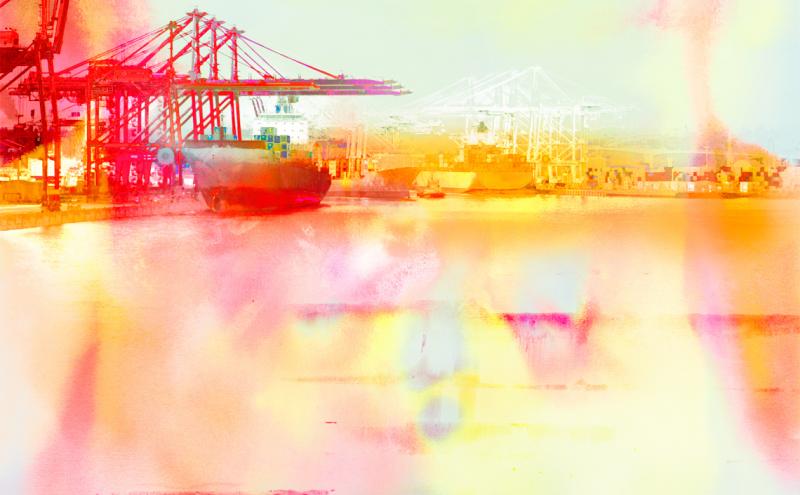 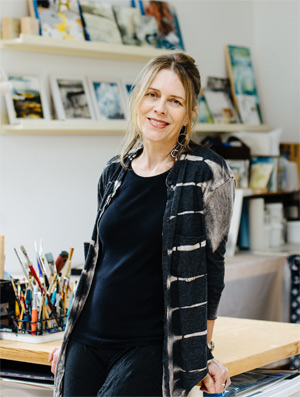 Seattle artist Iskra Johnson worships the useful, the imperfect, and the old. Her colorful and striking mixed media pieces pay homage to the maritime industry of the Pacific Northwest: the iconic structure of the shipping cranes at the Port of Seattle terminals, the minimalist geometry of Duwamish River barges, the grandeur of the grain terminal at Centennial Park, and the patina of age and history on the hulls of ships.

Johnson, influenced by modern printmaking and Japanese artistic traditions like 1850s Japanese woodcut and calligraphy, creates high-tech and stunning art from structures that some people take for granted or may see as an eyesore. Her goal is to help people to see everyday objects in a new light — to see the beauty in the ordinary.

Fresh eyes on the ordinary

Seattle commuters may pass the waterfront daily but never really see it. For Johnson every drive is a scavenger hunt, and a subject like the Port of Seattle gantry at Holgate is an epiphany. After many visits to the gantry, she created a mixed media print and entered it in an art show in Anacortes. She was thrilled when a regular commuter fell in love with it, bought it, and told her “I drive by that crane every day, but now I see it differently.”

The mark of success to Iskra Johnson is when her viewers appreciate everyday artifacts.

“My subject matter is not exotic, it is everyday industrial landscape — the landscape of usefulness. So if I can share the abstract and metaphoric beauty I see in these things and open that window for other people to see and celebrate it I’m doing my job. There is a political subtext also, in the elevation of the ordinary and the industrial into an aesthetic subject. I want to slow people down to look at the beauty of the classic industrial forms and appreciate them for what they are. I hope that when people see my work they will look at their surroundings differently. For instance, the grain terminal at Centennial Park. I have been visiting it for years, photographing it in all kinds of weather. Perhaps when people see my portrait of this site they will be struck by its purity of architecture in real life. … They can appreciate it for its iconic grandeur, as they would the mountain in the distance.”

As a Northwest native and the granddaughter of an Idaho silver miner, her teenage crush on the maritime world has stayed the course as a long-term relationship.

“It was a moment of intersection between music and the harbor that kindled my interest in industrial landscape when I was 17. I do not recall how it happened, but I ended up on a tugboat in the company of a jazz saxophonist and his girlfriend. They were a few years older than me, and I was struck silent in awe at their complete coolness. We sailed down the Duwamish harbor on the tugboat while Charley played the saxophone alternating with Keith Jarrett’s Köln Concert. I got burned to a crisp and stayed up for 24 hours. The panoramas of rust and chains and herons and blue green water mixed with piano jazz sealed my love affair with industrial landscape.

“In 2012 a friend took me down the Duwamish industrial zone in a kayak. It was extraordinary to be eye-level with the waterline of massive industrial ships and barges in a tiny boat, and the afternoon made an indelible impression on me. I took dozens of wobbly pictures with a point and shoot digital camera. Though at the time I didn’t know what to “do” with the photographs, I felt that they were the foundation of an idea yet to come.”

Johnson sees Seattle at a pivotal turning point in the transition between the Industrial Age and the Information Age. She wonders if Seattle is changing so much that it may no longer accommodate the essential functions of a working harbor.

“Here in Seattle we are in an enviable position. We are a seaport with an internationally connected harbor, and we are also a hotbed of new global technology. But what I see in my travels with my camera is a city at a tipping point. How will Seattle continue to support the space needed for a working harbor and for other trades? Will high paying industrial jobs be sacrificed for high tech office complexes? If you put a condo next to a train yard how long before the owners start complaining about noise and smoke, (just as new suburbs complain about cow manure and the slowness of tractors on the road?) Part of the urbanist dream seems to be that everything should be “residentially pretty,” with outdoor cafes for all, artisan lager and no cars or trucks or anything smelly. I think it’s important to bring the imagery of infrastructure into our idea of what we think is beautiful without simply turning it into disembodied plaza “décor” or a motif on a fish and chips menu. Trucks and shipping containers are as beautiful to me as they are essential to modern commerce and life.”

Johnson fears that many people do not realize how maritime trade and commerce impacts their daily lives.

“One night after a photoshoot I got into a conversation with a boiler room engineer at a bar. He is often at sea for four to six months, and he has a lot of time to think. As we talked about changes in Seattle and The Gentrification of Everything he mentioned a book called ‘Ninety Percent of Everything: Inside Shipping, the Invisible Industry That Puts Clothes on Your Back, Gas in Your Car, and Food on Your Plate.’ The title alone says it all. For people who shudder at the sight of container ships for what they ‘represent,’ imagine a world without them.”

She strives to elevate appreciation for infrastructure.

“The heroic scale of container ships and steel mills and factories puts the intangible, mostly invisible work of the knowledge economy in perspective. People working in front of computers forget that our world depends on physical infrastructure — they take it for granted. They also take the people who create and maintain infrastructure for granted. By making infrastructure the actual subject of my art I am also bringing into light the people who build and maintain it, even if they are not literally present in the picture. The contest between gentrification and industry is happening in all our coastal cities, and my work is a quiet way of lobbying for the workers and the preservation of a way of life.”

And Johnson has big concerns about the future of the maritime workforce, the shrinking pipeline of qualified workers, and the need for a more diverse workforce.

“I’m worried about youth growing up today and having no interest in being ferry captains or sailors or first mates. 88% of today’s ferry captains will be retired in the next five to 10 years. Looming ahead is a massive shortage of tradespeople in ship building, pipe-fitting, welding, and other industrial occupations. Part of the issue is that the trades are looked down upon, even though many of these jobs pay very well and have far more security than higher status tech ‘gigs.’ … Perhaps the traditionally male maritime work itself needs to be re-visioned as something that (more) women do, so there is the potential for a more diverse community on board and in the shipyards.”

Video: The Importance of Industry

Iskra Johnson’s art is big, colorful, and immersive and impactful in person. Here are a few places where you can view her work.

Johnson’s Color Bath: Images of the Harbor exhibit is currently showing on the walls of Taste Restaurant at the Seattle Art Museum through October 28. Here’s how she describes the pieces in this exhibit:

“In the brooding depths of a Northwest November, the words "Color Bath" appeared in my journal and made me pause. I shut my eyes and glimpsed a whole new color palette that would capture summer. It would allow the sometimes uneasy rootlessness of floating to become more like swimming — that moment when you lift your head out of the water and shake rainbows out of your eyes.”

Jump in and take a color bath

This series is about the visual and emotional state of floating, based on the industrial waterways and marine environment of the Pacific Northwest. These images are inspired by Japanese wood block and the work of the 19th century artist Yoshitoshi. Johnson's contemporary approach merges photorealism with organic and created surfaces.

View the video interview with Iskra Johnson and see how she creates her art on the Port of Seattle YouTube channel.

You can also view Iskra John’s art online at: