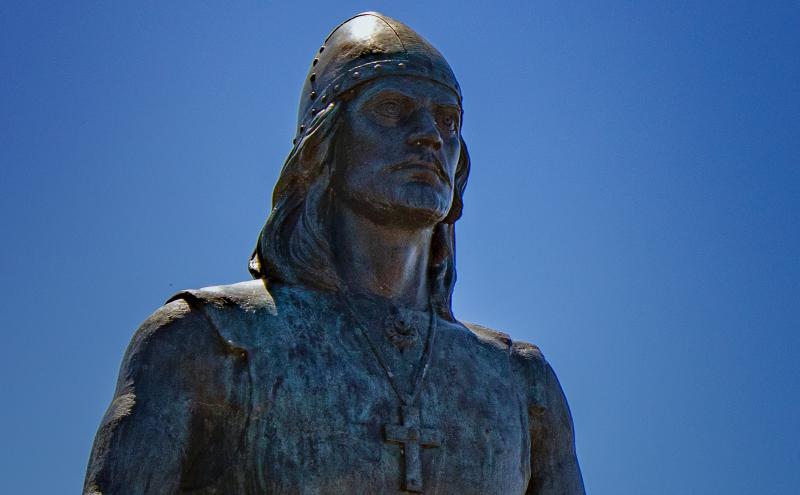 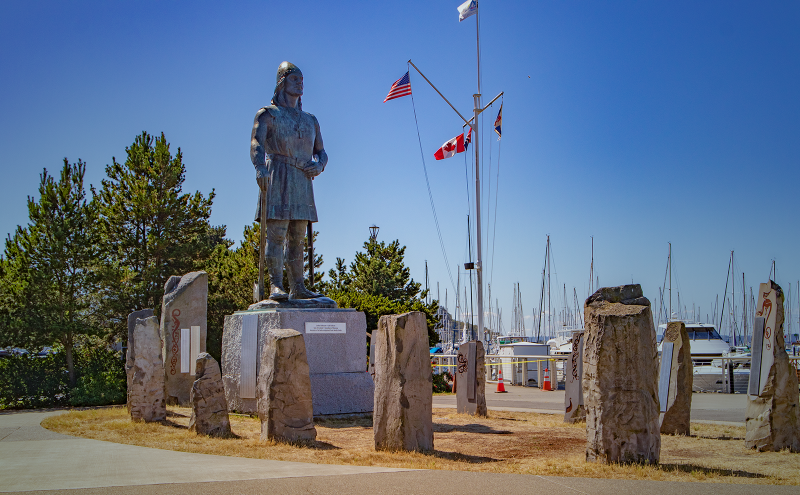 On the shores of Shilshole Bay Marina you’ll notice a 16-foot-tall silent sentinel watching the horizon. The statue depicts Leif Erickson, the Viking explorer who crossed the storm-wracked seas of the North Atlantic, landing in North America around 1000 CE. Did you know he was known as “Leif the Lucky?” Here are a few other things you may not have known about the statue.

1. Shilshole Bay Marina was NOT the first choice for the statue's location

The original home for the Leif Erikson Statue wasn’t supposed to be at Shilshole Bay Marina. Originally, the creators and funders of the statue wanted Leif to call the Seattle Center home.

The statue was conceived, funded, and given to the City and Port by a civic-minded group of Seattle residents of Scandinavian descent who created The Leif Erikson League (today known as the Leif Erikson Society) in 1957. One of their goals was to celebrate the generations of immigrants from Norway, Sweden, Finland, and Denmark. In addition to organizing and celebrating cultural festivals and education, they hoped to create this memorial as the physical representation of the history and culture of the generations of Scandinavian immigrants in the United States.

The Leif Erikson League raised funds for the design, fabrication, and installation of the statue. The League initially proposed the Civic Center location to Mayor Gordon Stanley Clinton and to the city parks and arts committees. The city demurred, fearing that city parks could be overrun with statues from every cultural and civic club. As an alternative, the arts commission recommended the Shilshole breakwater in Seattle’s Ballard Neighborhood, which was under construction by the U.S. Army Corps of Engineers and completed in 1958. The League agreed and approached the Port of Seattle Commission to place the statue at the Port’s new facility, Shilshole Bay Marina.

The statue eventually cost over $40,000 in 1962 (which is over $350,000 in 2022 dollars). The League raised the funds through benefits, dinners, dances, donations, the sale of postcards, and even several committee members taking out personal loans on their homes.

This location made sense. It would put the famed mariner next to the sea and would highlight the Ballard Neighborhood’s ties to the generations of Nordic immigrants who began call the area home starting in the 1880s. Traditionally many of these new arrivals had been fishermen in their home countries, and they brought their craft with them and helped build Seattle’s early commercial fishing and boatbuilding industries.

On February 27, 1962, the Port of Seattle commission unanimously approved the League's request to place the statue at Shilshole Bay Marina.

2.    The original mold is at Ballard’s National Nordic Museum

Werner, a pillar of Seattle’s Nordic Community, was a talented singer, artist, and college . Using history books as his guide, Werner recruited Trygve “Ted” Nakkerud and architect John Engan to help create the design. Working late into the night often to 3:00 a.m. and fueled with copious pots of coffee, songs, and pastries, the three men completed a fourfoot model in Werner’s home.

The plan had been to cast the statue in Oslo, Norway. But it was eventually sent to Berkeley, California so Werner could keep a closer eye on the manufacture of the statue. It was cast at a 4:1 ratio, with the final statue standing 16 feet tall. The statue was cast by artist Franco Vianello and Spero Anargyros.

3.    The Leif Erickson statue is tied to the Seattle World’s Fair

The Leif Erikson League gave the statue to the people of Seattle to celebrate the Century 21: Seattle World’s Fair.

The Erickson statue at Shilshole Bay was unveiled on June 17, 1962, in conjunction with “Norway Day” at the World’s Fair. A Viking boat flotilla and contingent of Norsemen clad in Viking costumes led the way as the statue was dedicated in front of a crowd of over 3,000 with appearances from the Norwegian Ambassador, the Consul of Iceland, Icelandic Poet Jacobina Johnson, songs by the Norwegian Male Chorus led by Chorus Director August Werner (who, as you recall was also the sculptor of the statue), and Washington Governor Albert D. Rosellini.

4.    Leif isn’t the only King to visit Shilshole Bay Marina

King Olav V of Norway visited Shilshole Bay Marina in 1968 to pay his respects to Leif Erikson. King Olav flew into Seattle-Tacoma International Airport (SEA) on Air Force One and spent five days in Seattle. The visit was organized by the Leif Erickson League of Seattle and a ceremony was held at the base of the statue with more than 1,000 revelers.

5.    Leif's new home more was more fitting for a king

After the Shilshole Bay location was revealed, August Werner felt it was too close to the parking lot, but the Port commissioners kept to their plan.

Though the statue wasn’t cast in Norway, the pedestal was. It was 14 feet tall and made of imported Norwegian blue granite. With the pedestal the statue stood a total of 30 feet high and fronted by a small pool and surrounded by benches and a wall of the same granite. And to Werner’s chagrin, behind him was the large and unsightly Marina parking lot.

In 2007, the Port redeveloped the marina with a new office building and a larger and more attractive plaza for the statue.  At this time,  Leif had to be moved to the new location and placed on a newer pedestal; but this task  turned out to be a much more difficult lift, literally.

The Port thought it would be easy to move, but it turned out to be much heavier that was realized. The statue had been fortified by 3,000 pounds of cement pumped into a hole in the right leg of the statue. Eventually it took five days of sweat and tears to move the Viking to his new home.

Today you can see the beautifully sculptured plaza, landscaped in the shape of a Viking long ship. The statue is surrounded by 14 upright basalt stones, adorned with Norse carvings and  with plaques with the names of over 2,300 Scandinavian immigrants and their home towns.

The Viking runic carvings on the stones were created by master carver, Jay Haavik. The symbolic designs depict fighting horses, bronze age boat motifs, biting snakes, and two dragons. The inspiration for the stones comes from Scandinavian runestones carved between the 10th and 12th centuries.

6.    The statue is a navigational landmark

After the statue was unveiled, Norwegian ships would pass by the statue on their way through the sound and would salute Leif by dipping their flags and blowing three long whistles. By mid-1963, Washington Senator Henry M. Jackson announced that Leif Erikson was to be included on maritime charts. 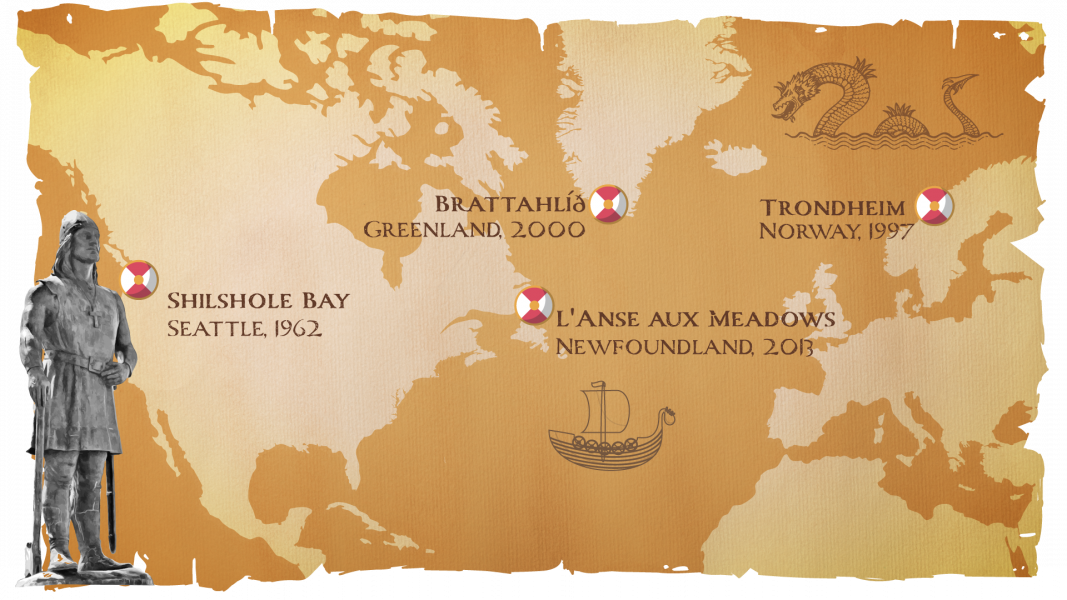 7.    There are four copies of the statue around the world

Literally following in Leif’s footsteps, the three copies of the of Werner's Leif Erikson statue were cast in bronze and were installed in:
Each of these locations are related to Leif and his family.