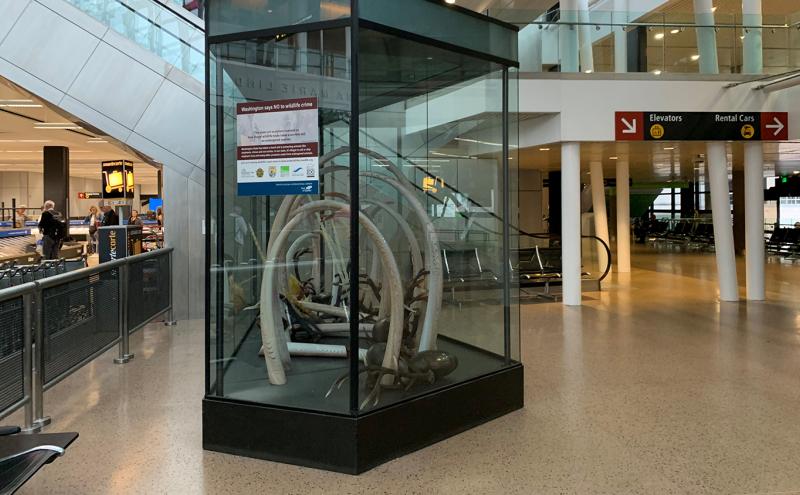 Earlier this year an employee from Woodland Park Zoo sent us a question about the meaning of the glass sculpture by glass artist, William Morris, located near the south end of our baggage claim.

The airport’s public art program should prompt questions and introspection, as well as energize and inspire guests at Seattle-Tacoma International Airport (SEA).

But with a piece as important as Northwest Garnering, 1992 by Morris, we need to get our communications right.

This artwork is an embodiment of what Morris calls "artifacts." A series of 60 pieces, ranging in height from a few inches to 8 feet tall, artifacts are usually described as objects made by human work. Morris describes them as objects brought about by nature after the arrival of man — evidence of situation — that reveal a life and its associated mysteries.

These can take on numerous configurations in Northwest Garnering, 1992, including a spear, ribs, a gilded skull, and antlers – implements of animal and man. The glass art intends to show that the decline of species eventually leads to the decline of man.  None of the specific elements in the art display are exact replicas of animal antlers or bones, except for the human skull.

But when some of our best partners in the fight to combat illegal wildlife training felt that the display misses the mark, it was time to act.

Earlier this year we spoke to many of the region’s leaders about the Port’s role in combating illegal wildlife trafficking.  As the operators of the fourth largest international maritime cargo container gateway in the United States, and of Sea-Tac Airport, the 10th most connected international hub airport in the United States, it is a sad reality that criminals try to transport illegally trafficked items through our facilities.

This past spring Port Commissioner Fred Felleman joined local leaders Dr. Sam Wasser from the University of Washington, Art Min from Vulcan, and Kerston Swartz from the Woodland Park Zoo at a World Affairs Forum discussion on what local institutions are doing to combat illegal wildlife trafficking.

Commissioner Felleman shared how the Port partners with U.S. Fish and Wildlife Service, Washington Department of Fish and Wildlife, and Customs and Border Protection to ensure that law enforcement has access and support to do its work at the airport and seaport.

At the airport, we began working with Woodland Park Zoo, Point Defiance Zoo & Aquarium, Northwest Trek Wildlife Park, Seattle Aquarium, Washington Department of Fish and Wildlife, and the U.S. Fish and Wildlife Service to ensure that our glass art by Morris accurately conveys both the artist and the airport’s perspective. Our new sign reads: 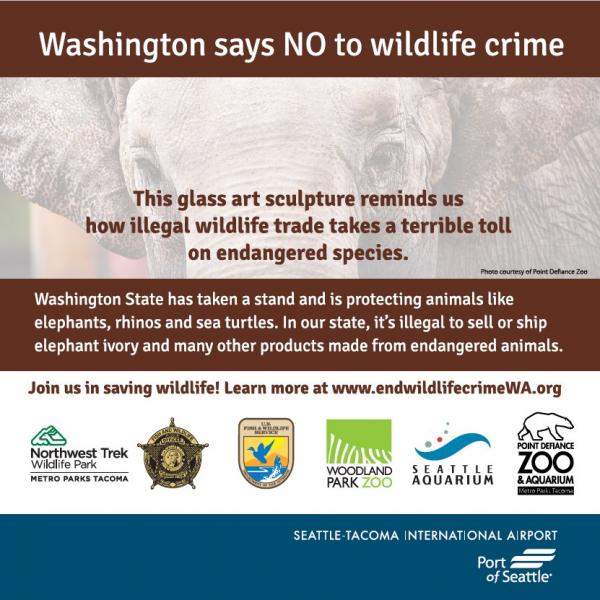 This is just the beginning of a longer-term effort for the Port to engage more in efforts to combat illegal wildlife trafficking. Stay tuned for a new educational display coming to Sea-Tac Airport’s South Satellite, our hub for international passengers, to highlight the impacts of trafficking on endangered wildlife.