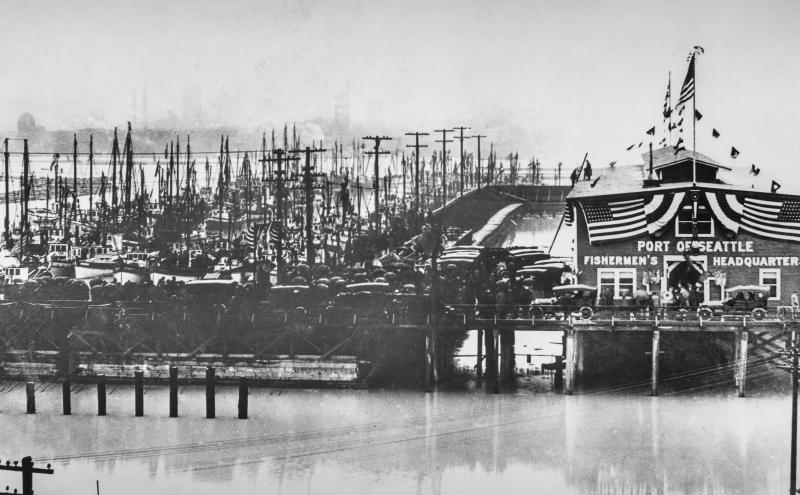 On this date, January 10, 1914, a large excited throng crowded the shores of Salmon Bay and greeted the cheerfully decorated flotilla of over 200 fishing vessels hailing from Olympia to Alaska to the fanfare of bands, speeches, and a gala luncheon. The occasion was the dedication and opening of “Fishermen’s Headquarters,” known today as Fishermen’s Terminal. The fleet that plies the dangerous waters of the North Pacific finally had a place to call home.

This terminal was built on a snug harbor in Salmon Bay between Ballard and Magnolia neighborhoods. It was conceived of as a general cargo facility and a dedicated home port for the fishermen of the region who fished the Northwest and Alaskan waters and later became the epicenter of the fishing and maritime industries.

Fishing: A Keystone of the Port

From the inception of the Port of Seattle, a fishing terminal was always a key part of the Port’s strategy. The first proposal the Port commission put forth and approved by the voters in 1912 included the construction of:

The Port recognized the importance of building a facility that would give a place for fishermen to moor, repair, and provision their boats in the offseason. Until that time there wasn’t a home port for fishermen who were forced to look for moorage wherever they could find it. Knowing the economic importance of the fishing industry, the Port built a central home.

Fishermen’s Terminal was the first construction project for the Port of Seattle, with pile drivers hammering the supports for the Salmon Bay docks on February 15, 1913. When the terminal opened it had more than 1,800 feet of moorage with space for 100 boats, a two-story warehouse, and ample space for repairing nets.

“To organize and solidify the scattered fishing industry of the Northwest, to provide a home for the extensive fishing fleet, to give such aid as the Port rightfully should give in protecting the fisherman in marketing his hard-earned products — this surely is an ambition worthy of the most earnest efforts of the Port Commission.”
– Hiram Chittenden (1858-1917), Port Commissioner (1911-1915) at the dedication of Fishermen’s Terminal

When it was dedicated, Salmon Bay was a brackish bay that led to Puget Sound by a small outlet. This would radically change in 1917 with the completion of the Hiram M. Chittenden Locks that turned Fishermen’s Terminal into a freshwater port. This is one of the biggest advantages for ocean going vessels to moor; ocean critters, like barnacles and gribbles, can cause damage to boats, but they can’t live in freshwater. Mooring in a freshwater port is an easier and more environmentally friendly way to keep the ship hulls in good condition.

The building was initially called “Fishermen’s Headquarters” when the facility was dedicated. Even though it has changed its name over and over the last century and the fishing industry has undergone significant changes over the years, it remains a linchpin of the fishing industry and community in the Pacific Northwest.

Over the decades, the Port made continual improvements to the facility to update, modernize, and improve Fishermen’s Terminal. This work has allowed it to continue to serve as the headquarters of the North Pacific Fishing Fleet. The Port continues to invest in the health of Fishermen’s Terminal and has allocated millions of dollars in investment over the next five years. These improvements will ensure this important facility will continue to thrive as an anchor to a diverse economy for Seattle and the region.