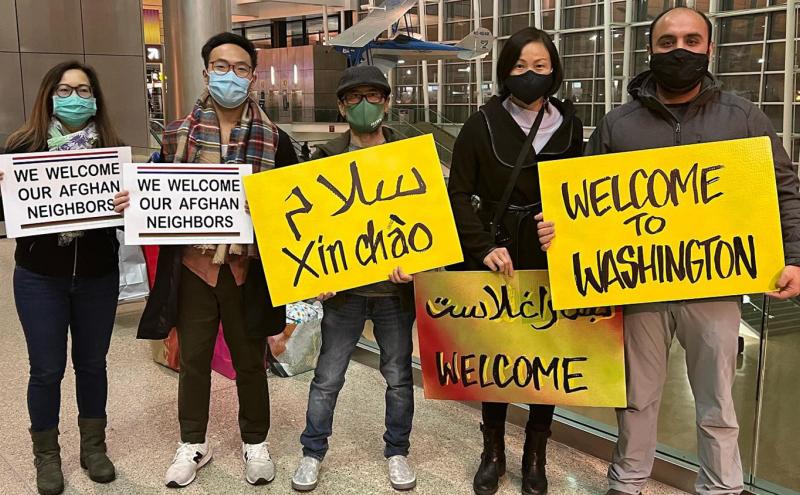 In the summer of 2021, when the United States pulled military forces out of Afghanistan, Kabul exploded into chaos as many desperate Afghans sought to escape the Taliban and flee to safety.

Ghulam Mohmand followed the news from across the world in Seattle, feeling heartbroken and helpless as he watched the shocking scenes from his home country and listened to reports from family and friends still living in Afghanistan. Mohmand, a Pathfinder customer service lead at Seattle-Tacoma International Airport (SEA), immigrated to the United States from Afghanistan seven years ago.

In the following months, more than 120,000 people would be evacuated from Afghanistan, their lives endangered because of their affiliation with the United States during a two-decade long war. The United States has welcomed many of these refugees, relying on resettlement agencies, non profit groups, and passionate volunteers like Mohmand, who has led multiple efforts to support refugee resettlement in Seattle. 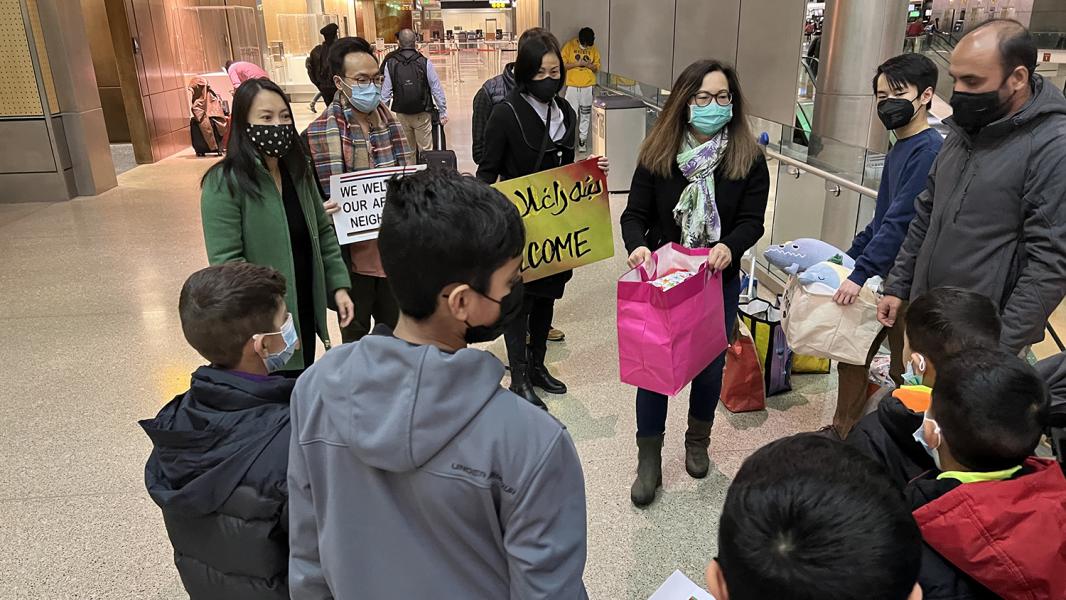 With many Afghan refugees waiting on U.S. military bases until overwhelmed agencies can bring them into communities around the country, the State Department began a pilot program in October 2021 for private citizens to form “sponsor circles” to provide initial resettlement assistance to Afghans as they arrive and build new lives.

A sponsor circle consists of five people dedicated to a refugee family’s wellbeing, who must raise at least $2,275 for each sponsored individual to replace money typically provided by the federal government. The group helps the family secure housing and get basic necessities; complete relevant paperwork; connect to services; translate information; help secure employment; and provide community orientation, friendship, and moral support.

Through a contact at the Muslim Association of Puget Sound, Mohmand connected with the Seattle group Viets for Afghans, to form the first Sponsor Circle in the country, bringing his nephew and his family from Fort Dix, New Jersey to the Seattle area to be closer to Mohmand.

In addition to this already busy schedule and family responsibilities, Mohmand spends additional time helping Afghan families that have already settled in Seattle. He cooks Afghan food at his home for multiple families and calls newly resettled families on the phone and speaks to them in their native language.

“I ask them how they feel and if everything is ok. Just being there makes a huge difference. The most rewarding thing for me is that I feel like I am doing something productive,” he said. “These people need help. They are my brothers and sisters and I am happy I can do something, but wish I could do more. Helping others is always the best feeling one can have.”

For the past five years, he has also served on the Afghan American Cultural Association (AACA) Board of Directors , helping Afghan new arrivals before the refugee crisis with driving courses, United States cultural awareness, finding jobs, and cultural activities.

Mohmand has received interest from Port colleagues and leadership wanting to help. As a member of the Port employee resource group, VOICE (The Voice of Immigrants Committed to Equity), he is launching a monthly meeting for Port employees to provide updates on Afghan refugee resettlement and the current situation in Afghanistan.

The Port of Seattle works to be a safe and welcoming place for all. This includes making SEA Airport as welcoming as possible, as one of the first spaces refugees see in America. Recent Port efforts to support Afghan refugees have included partnerships with current tenants and nonprofit partners to create a dedicated, private welcome and work area. It's a place where nonprofits can connect with arriving Afghans, have refreshments and pick up supplies donated by SEA shops and restaurants, and enable refugee resettlement case workers to meet arrivals directly at the gate after security — instead of searching for each other in the busy baggage claim area. The Airport Jobs office is also working to provide job search assistance and translation, connecting Afghan refugees to jobs at the airport.

Mohmand is heartened by the connections he has formed with others who want to support Afghan resettlement efforts.

“Sometimes you think humanity is dead, but when this crisis happened, I saw all these people coming together,” he said. “It gives me hope that humanity is still there.”

Some of his strongest partnerships have been with members of Viets for Afghans, finding connection through their parallel experiences.

As Mina Le watched the Afghan crisis unfold on the news, the scenes of desperation and violence felt all too familiar. In April 1975, after the last U.S. service members withdrew from Vietnam, the first wave of Vietnamese refugees arrived on American soil without any status or access to resources. Le and her family of 11 were among those refugees escaping persecution in Vietnam. Like Afghan refugees, Le’s family waited at U.S. military base to be resettled in the United States. Nearly 40 years later she is still in touch with her sponsor family who helped her family navigate life in a new country.

“We formed a very strong bond,” she said. “After the situation in Afghanistan, I wanted to look into the sponsorship program and pay it forward with other families to assist them in the same way we were helped.”

Le is a member of Viets for Afghans, which started in August 2021 as a text thread between a group of five friends with a goal to connect 75 Vietnamese families with 75 Afghan refugee families for temporary housing. The group exceeded its goal and referred more than 80 volunteers to local resettlement agencies to take the next steps. The action-oriented text chain rapidly evolved into a volunteer-driven coalition.

Today, Le is one of four Vietnamese women leading support efforts for the group. Le is in charge of  organizing all the Sponsor Circles, and with support from Mohmand and other community members, has sponsored six families to date, and is in the process of sponsoring four more.

“It’s been amazing to be able to help,” she said. “You watch the news and you feel powerless and angry at the situation. There are 70,000 refugees coming to the United States and that is an overwhelming number. Our motto is to focus on one family at a time.”

“I feel so privileged to be able to support a family. Every single person who has joined a sponsor circle has found it to be a life-changing event. You get together with perfect strangers, and you huddle to help find housing, employment, in the place of a resettlement agency. You’re meeting families and falling in love with the kids and learning about Afghan culture. It has enriched my life.”

The Sponsor Circles pilot program will wrap up in a couple weeks as Afghan refugees clear out of U.S. military bases, but Le and Mohmand aren’t finished supporting refugee families. Their friend, Ismail Khan, and Le recently formed Afghans of Puget Sound Alliance (APSA) to provide long term assistance for refugee families who have fallen through the cracks of the system. Mohmand is assisting APSA as its Outreach Director.

“We have a humanitarian crisis all around us; we just don’t know it,” Le said. “First we need to stabilize these families and long term we want to look at how can we empower and strengthen the Afghan community through civic education, advocacy, and educational programs such as driving lessons for women to enable them to more fully participate in society.”

Le is hoping to share the lessons learned supporting and growing the Vietnamese refugee community over the years.

“We want to form an organization that not only looks at immediate needs, but also focuses on the next 10 to 20 years to envision what a healthy community looks like,” she said.

Although the Sponsor Circles program is winding down, Mohmand said there are many ways the community can help Afghan refugees, whether through donations or volunteering. Support can include giving refugees a ride to a park, taking them shopping,  driving them places, teaching English, or donating money or gift cards.

To help, contact Ismail Khan, President, Afghans of Puget Sound Alliance at Ismail@apsawa.org or Ghulam Mohmand at gsubhanim@aol.com or (425)524-1993. 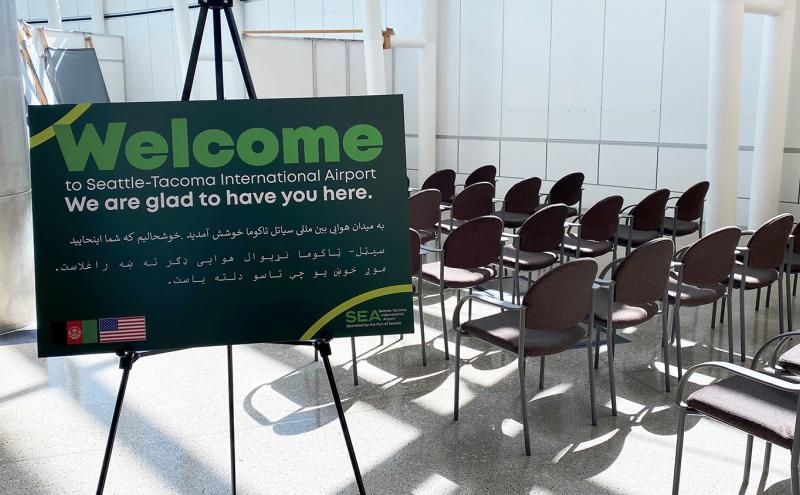