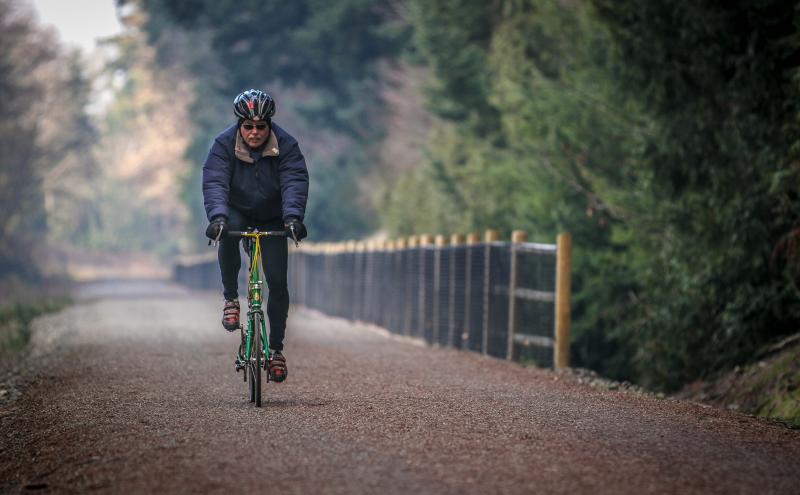 Ten years ago, the area known as Eastrail looked tremendously different from how it looks today. Once upon a time it was a 42-mile stretch of railroad bed. In recent years, local jurisdictions have converted sections of the trail for public use and to spur economic development.

One notable example is the Cross Kirkland Corridor,  a 5.75 mile stretch that has been converted to a biking and walking trail. This trail became one of the reasons that Google decided to keep its Washington campus in Kirkland.

The Port of Seattle purchased the whole rail corridor in 2009 from BNSF with the idea of working with Eastside communities of Bellevue, Kirkland, and Redmond to develop sections to benefit the community. In 2011, Kirkland first reached out to the Port with their vision to use the section of the rail corridor that passes through Kirkland to spur significant economic development.

“Once we heard it was for sale it was just a no-brainer,” Kirkland Mayor Penny Sweet says. “We sat down and said why don’t we buy it?”

The Port was an active partner to Kirkland in their mission to revitalize the area, encourage Google to stay and expand their campus, and to bring other growth to the Totem Lake area.  And it’s sparked a transition from developing housing to building new businesses in Kirkland, and resulted in a new group purchasing the Totem Lake Mall property.

“The Eastside is also just exploding with growth right now so economic opportunity is everywhere,” Mayor Sweet says.  “The state of our economy here in Kirkland is booming, and I think partnerships like the one we have with the Port are very important to sustain that.”

The upside continued when Google committed to stay in Kirkland, bought a new parcel adjacent to their property, and built a brand-new LEED Platinum building (just the 2nd in the state at the time) to expand their campus. This brought 1,500 new jobs to Kirkland, and Google built a $3.2 million park for the community between the two buildings.

“King County is our immediate jurisdiction so if we don’t have services for the entire region, we’re obviously doing a disservice,” Port Commissioner Fred Felleman says. “It’s really that much more important that we reach out and make sure that they’re aware of things that we’re doing, and to do things in those communities that enhance the economic opportunities our community — the Eastrail for one great example.”

Conversion from private to public asset

On top of the business development, the area has transformed into a beautiful trail for pedestrians and cyclists, with art installations along the route. The community has gotten involved, including building connections like stair and bridges to this trail, and enlisting volunteers to adopt and maintain sections of the trail. There are three community art installations on the trail, including “The Spikes,” three columns consisting of recycled railroad spikes, and the Arts Commission is working to secure more art. The community has fully embraced this project as a site for year-round events, from a city-wide block party with neighborhood stations along the trail with activities and food, to the Google- sponsored Holiday Lights show at the park next to campus.

Without the Port and City of Kirkland’s collaboration, there’s no telling what would have happened in the area. “If [the Eastrail] wasn’t purchased by the Port of Seattle, it would have been broken up into a non-contiguous random operation, but by having the continuous feature through the region the individual communities were able to build on each other and have this become an economic engine for places that want to be near such a natural amenity,” Commissioner Fred Felleman said.

View a map and more information about Eastrail