Saying Thank You — Right Place at the Right Time 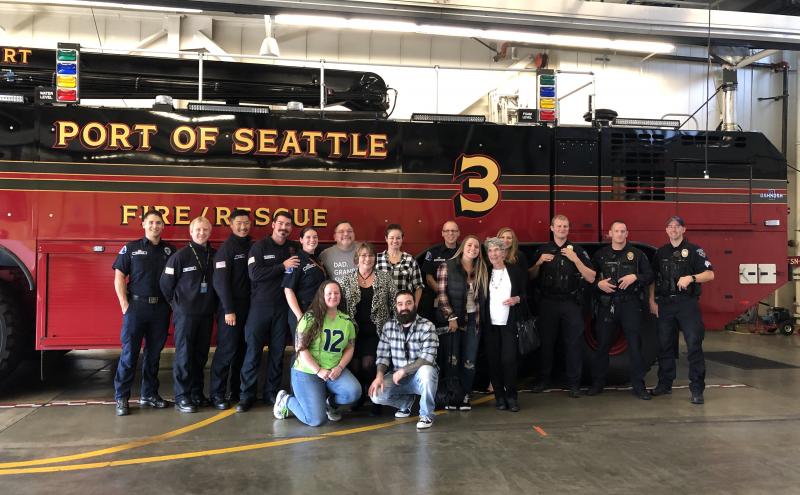 Nothing about Joe Ravenscroft’s day had gone as planned. When the 50-year-old Seattle-area resident headed to his gate to board the 12:40 p.m. flight to Anchorage, Alaska at Seattle-Tacoma International Airport (SEA), he started to feel sweaty and clammy. His early morning flight had been cancelled due to a mechanical problem and he opted for a later flight that would guarantee him an aisle seat.

He found a seat near his gate, made some phone calls, and drank water in an effort to relax. The next thing he knew he woke up with first responders surrounding him, finishing CPR.

Ravenscroft thought he had just passed out but was informed that he had suffered a heart attack and would be transported to a nearby hospital.

Thanks to the help of three bystanders, including Courtney Howe, a cardiac care nurse from Tacoma, Wash., and Kevin Spohrer of Reno, Nevada, as well as the response of the Port of Seattle 9-1-1 Center, Police Department, and Fire Department, Ravenscroft received the timely emergency medical services he needed to survive.

Howe was nearby dropping her son off for his flight, when she saw Ravenscroft collapse. Due to traffic, her son had missed the earlier flight and had to be rebooked for a later time. She rushed to help Ravenscroft, initiated CPR, and called out for an AED (automated external defibrillator) — a lightweight, portable device that delivers an electric shock through the chest to the heart.

The series of unplanned events happened to be perfect timing for Ravenscroft.

“It just so happened (Howe) was there the same time as I was,” he said. “It couldn't have happened at a better place or a better time. If things had been different, I probably wouldn’t be here.” 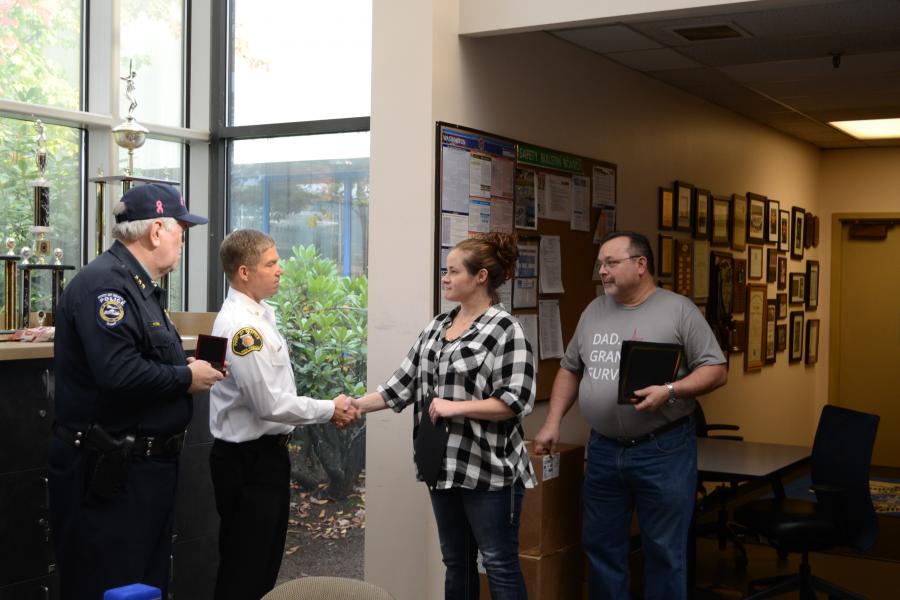 Howe said the experience was “surreal.”

“I’ve never had the opportunity to step in and help outside of the hospital,” she said. “It was nice to see the whole process of how the Emergency Medical Services (EMS) system works.”

Port Police Sergeant Kelly Smith, Officers Greg Anderson, Logan Brohm, Kali Matuska, and Justin LeRoux responded to the call and took over CPR. The Port of Seattle Fire Department and King County Medic One took over advanced care and later transported Ravenscroft to the hospital. He was alert, conscious and breathing on his own.

“The four police officers worked seamlessly in an effortless display of coordinated teamwork that made me so proud of them,” Smith said. 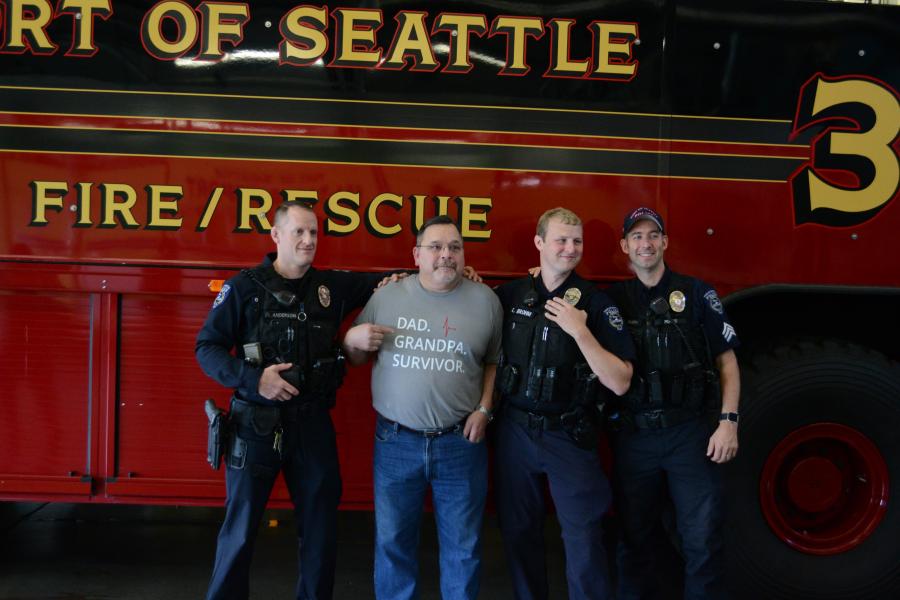 After Ravenscroft was transported to Highline Hospital in Burien, he learned he had suffered a widowmaker heart attack, caused by an artery that was 98 percent blocked. Doctors were unable to put in a stint due to the proximity of the blockage to the heart, so he was transferred to Swedish Cherry Hill, where he had surgery the next morning.

After he was home and healthy, Ravenscroft made plans to thank the first responders and bystanders who saved his life in person. Accompanied by his wife and daughters, he visited the Port of Seattle Fire Station last week where Port Police Chief Rod Covey, Port Fire Chief Randy Krause, and responding Port police officers and EMTs, and Howe were on hand to celebrate the lifesaving efforts of everyone involved.

“What bystanders and first responders do makes a difference,” Ravenscroft said. “Knowing CPR, knowing how important it is to save someone’s life, and to have that quick response. I just wanted to reach out and say thank you to everyone, because I don’t know how often that happens.”

Krause said Port of Seattle first responders support a mostly transient community, so having the opportunity to meet Ravenscroft was a particularly special experience.

“Our community comes and goes, but you are part of our community for the brief time you are here,” he said. “It’s amazing when we can see the effects of what we do on a daily basis." 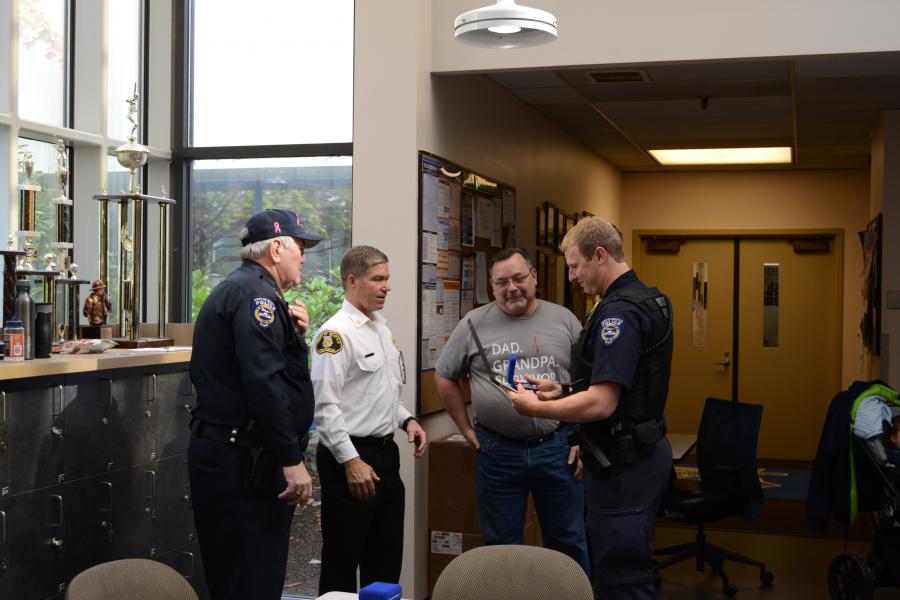 Highest save rate in the world

“If you have a heart attack and are able to survive, you will survive (at SEA),” he said. “It couldn’t happen in a better place.”

Krause said bystanders stepping up is a huge factor for SEA’s high save rate. Most airport collapses are witnessed by somebody else in a public place. When this happens, bystanders or emergency personnel can administer CPR and call 911 quickly.

“We rarely respond to a call for a heart attack when CPR isn’t already in progress with bystanders,” Krause said. “This chain of events is a pathway for success.”

Easy access to AEDs across the airport are also a major factor in successful lifesaving efforts. There are close to 170 AEDs located throughout the terminals equipped with instructions that anyone can follow to help save a life. You can locate them before your visit in the Sea-Tac interactive map by searching for "AED."

Port of Seattle Fire Department EMTs participate in the King County Medic One System, an advanced concept of medical care that is world-renowned for its focus on the active participation of citizens in the lifesaving process.

The Medic One System empowers community members to:

Find out how to receive CPR training from KingCounty.gov. 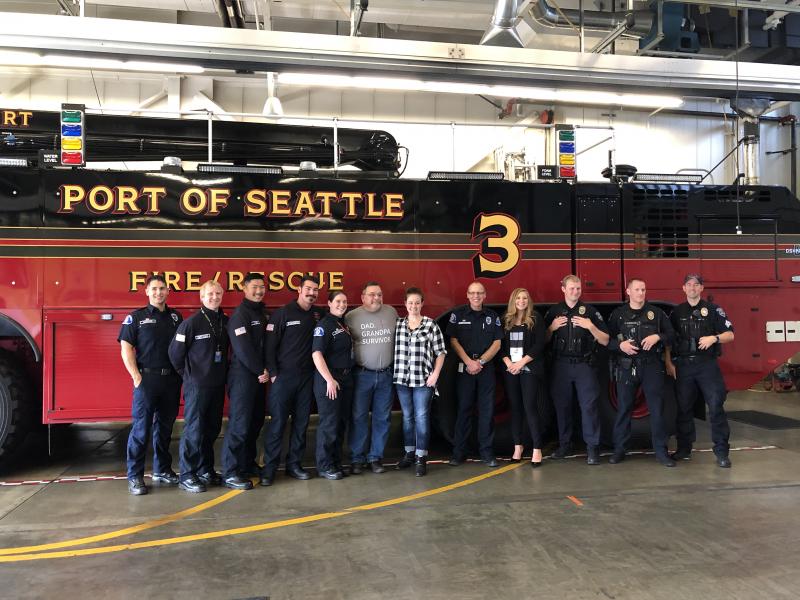