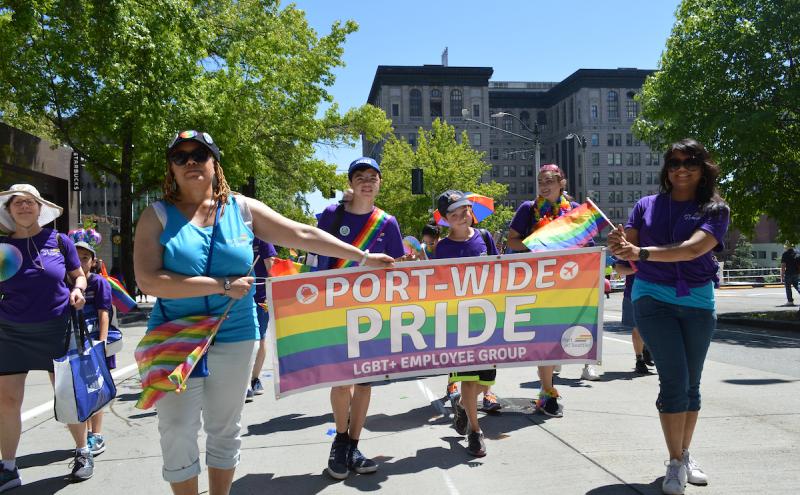 All over the world, June is the month to celebrate gay, lesbian, bisexual, transgender, queer, and asexual people, plus all other sexual orientations and genders (LGBTQIA+). This 2019 is a special year, as we mark the 50th anniversary of the Stonewall uprising and half a century of LGBTQIA+ liberation. This year, we also mark 45 years of Seattle pride and 17 years of the  Port of Seattle’s participation in the annual parade.

Pride started back in 1969 in the Stonewall Inn in New York City, a refuge where the LGBTQ community was able socialize in safety. On June 28, 1969, the police arrested employees for selling alcohol without a license and anyone not wearing gender-appropriate clothing, according to the New York law at the time. The lack of liquor license was used as a justification for police to start the raid. The patrons fought back and barricaded themselves in the bar while around 400 people rioted outside. Eventually, the barricade was breached and the bar was set on fire. These riots went on for the next five days. That incident is now marked as the beginning of the gay rights movement in the United States. Just this year, the New York Police Department Commissioner apologized for officers’ actions during the Stonewall uprising.

Seattle started to celebrate Pride week 45 years ago in 1974. That was the first event in the region in which the gay community came out of its collective closet. However, since the 1960s,  Seattle provided an accepting environment for the LGBTQIA+ community. In 1967, Nick Heer, a professor at the University of Washington founded the Dorian Society, named after the Doric Hellenic warriors of ancient Greece who considered homosexuality glamorous. The mission of the Dorian Society was to create a more respectable image of the Seattle homosexual community and to reform the sodomy laws which were repealed only in 1975. 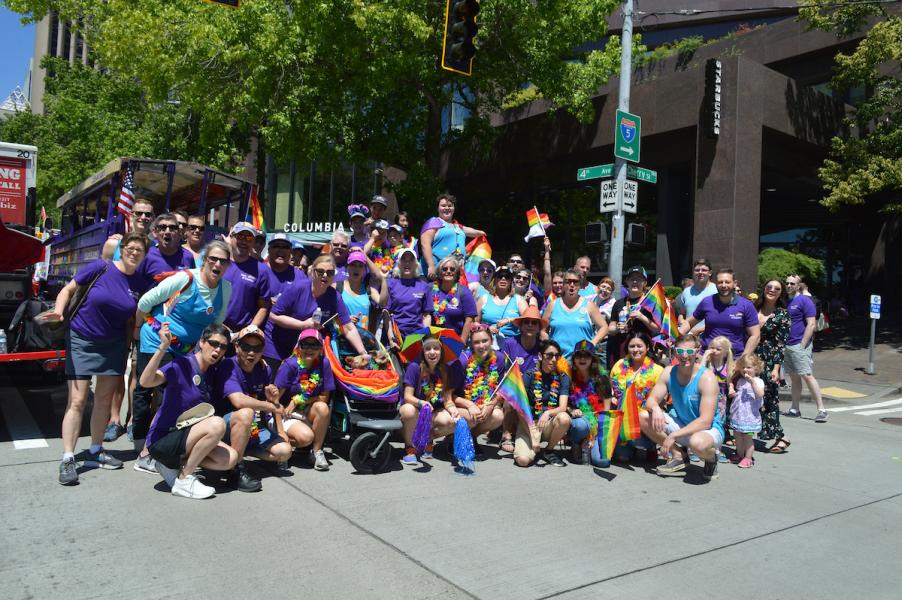 Pride at the Port

The Port of Seattle started to participate in the Pride Parade 17 years ago, with a few extremely courageous and authentic leaders, including Lindsay Pulsifer, Rick Williamson, Sloane Hodge and Beth Britz. The first few years were pioneered by a handful of leaders that we remember and honor. The Port had 70 participants in the celebration last year.

Back in 2004, Lindsay Pulsifer and Rick Williamson met after a “Courageous Conversation” panel discussion on LGBT issues at the Port and realized that there were issues surrounding inclusion, equality, and discrimination in our workplace. That led to the creation of the Port-Wide Pride (PWP) employee resource group and created “Safe Spaces” at the Port for people who just needed to talk with someone. In 2016, the LGBTQIA+ community came together to re-form the Port-Wide Pride Employee Resource Group at the Port of Seattle. PWP includes employees that are not  lesbian, gay, bisexual, transgender, questioning, intersex, or asexual (LGBTQIA+)  themselves, but who are allies of the group. Port-Wide Pride members support, encourage, and advocate for initiatives and programs that pertain to a diverse cross-section of Port employees, their spouses/partners, and families. Since 2016, PWP has led the Port’s participation in the Pride Parade Seattle on the last Sunday of the week of June.

Do we still need to celebrate Pride?

Yes, we do!  Pride remembers and honors those in our community who fought for many years to achieve the rights and protections for LGBTQIA+ persons today. We should also remember that marriage equality in the United States has only been legal since 2015, and there are ongoing efforts to limit the civil rights of queer people. Bullying and episodes of violence, especially against transgender people happen every day and everywhere. And outside the U.S., there are still many countries where being gay is illegal. We need Pride, and we need support and allies in June, but also in the other eleven months of the year.

We certainly must celebrate Pride. Our employees are thrilled by the Port’s continued participation in the Parade this year and grateful that our employer supports our initiatives all year round.