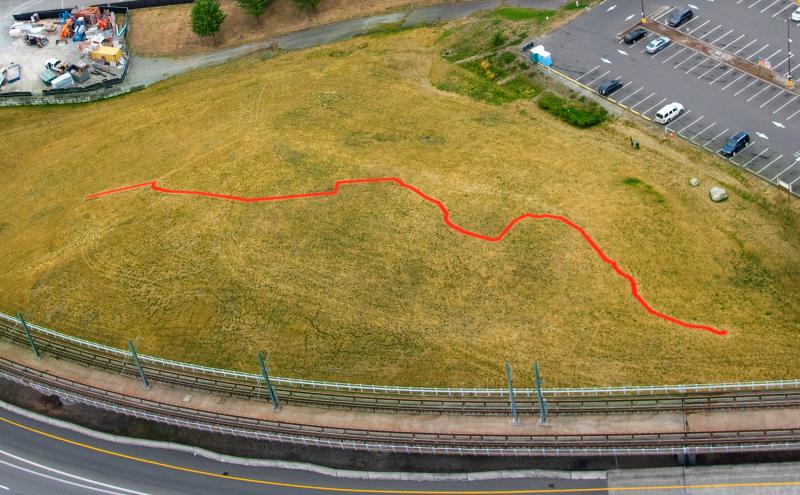 On August 3, New York-based artist Molly Gochman opens Red Sand Project: Border US-MX, at Seattle-Tacoma International Airport. Gochman created this 350-foot long, two-foot-wide earthwork that replicates the US-Mexico as a symbol of the borders and boundaries that are drawn between people and communities—and the existence of which supports the creation of vulnerable populations. The installation is envisioned as a platform for spurring dialogue on equity, immigration, human trafficking, and support for trafficking survivors.

The formal unveiling of the installation will be marked with a public event to provide attendees with an opportunity to hear from a wide range of speakers and to engage with the artwork and artist. Among those confirmed to speak are several recent refugees to the Seattle area as well as representatives from Northwest Immigrants Rights Project, who will speak to the refugee and immigrant experience and the supports needed for those communities. Additional speakers include Tommy Gregory, public art manager and curator at Sea-Tac Airport, as well as Gochman, who will discuss her vision for the installation and wider effort, through the Red Sand Project, to bring visibility to human trafficking and the social structures that allow its continued proliferation. 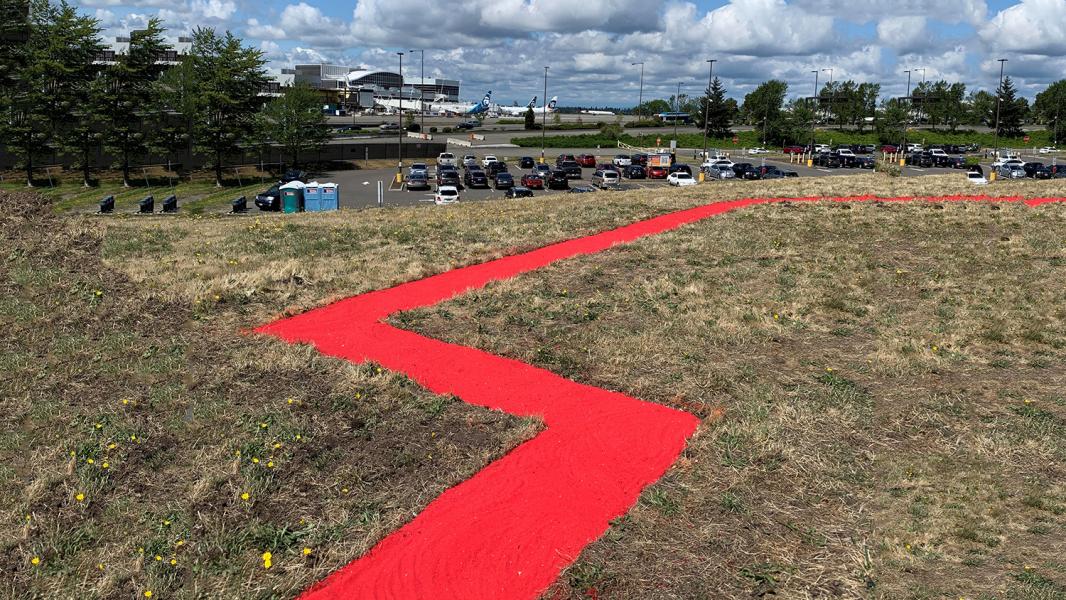 The event is on August 3, from 11:00 a.m. to 2:00 p.m. Limited parking is available at the Cell Phone Lot, at 2623 S. 170th Street. For those traveling by Link Light Rail, a shuttle is available to transport you from the SeaTac/Airport Station to the installation site. If you plan to attend, please RSVP, by August 1, to earthworks@redsandproject.org.

The piece was installed to coincide with the Seattle Art Fair and is part of a long-term vision to present the work at airports and other highly visible public sites across the country. Red Sand Project: Border US-MX is visible from the sky as certain flights take off and land; from the Link Light Rail, both approaching and leaving the airport; from the top deck of the parking garage; and from inside the airport at Concourses N and D. Individuals who wish to see the installation up close can access it via the Cell Phone Lot, at 2623 S. 170th Street.

As part of a wider strategy, the Port seeks to leverage its roles as a county-wide government, large employer and manager of significant trade and travel facilities, including Sea-Tac Airport, to ensure these venues are not used as transit points for traffickers and their victims. The Port also wants the 50 million annual visitors to Sea-Tac Airport to understand more about this issue and what they can do to report suspicious activities. The installation of Red Sand Project: Border US-MX provides opportunity to engage with these issues through art and Gochman’s social practice. Brief videos on the installation will be looped on CNN screens throughout the airport, and further information will be available at Light Rail stations and on the Sea-Tac website. On view for the remainder of the year, the installation will be further activated by a series of interventions and public programs developed in collaboration with non-profit organizations local to Seattle, including Northwest Immigrants Rights Project as well as other community partners.

Border US-MX is part of the broader Red Sand Project initiative, which Gochman first launched in 2014 after realizing the depths to which slavery continues to be a contemporary reality. Globally, an estimated 40.3 million individuals live as slaves, whether in forced marriages, forced labor, or for sexual exploitation. Gochman recognized that to begin finding a solution to such a widespread challenge, increased public awareness and engagement would be essential. She initiated the first Red Sand Project action in Miami, where she filled the cracks of sidewalks in and around the Art Basel Miami Beach pavilion with red sand. The approach was symbolic, with the grains of sand representing those individuals who fall through the cracks—whether the cracks of our social, economic, and political systems or those of our personal consciousness. At the same time, the performative aspect of actively filling sidewalk cracks offered Gochman a way to engage people, with curious onlookers becoming unexpected participants in the conversation.

To expand the reach of the Project, Gochman launched a website—still active today—offering Red Sand Project toolkits, which include packets of red sand and information about slavery and trafficking in the U.S. and across the world, giving participants a way to physically engage with the cause and to build discussions around the action. Today, Red Sand Project actions have been done in all 50 states and in 70 countries, with more than one million participants. In 2018, 374 groups in the U.S. requested toolkits as a means of drawing attention to this critical issue, including high schools and colleges, district attorneys and police departments, governmental agencies, religious organizations, organizations dedicated to women and family services, and a wide range of others. These efforts can be tracked online with the hashtag #RedSandProject.

In 2015, with discussions about immigration and the US-Mexico border increasing, Gochman began to consider how to make Red Sand Project even more visible. This resulted in the earthwork, Red Sand Project: Border US-MX, which was most recently presented at the international airport in Houston, Texas in 2018, as part of what will be an ongoing tour to bring the project and the conversation to different communities across the U.S. The presentation in Seattle will be the first to be activated by interventions and programs, happening regularly throughout its run. “As ideas, ideals, and fears about immigration, security, equity, community, and the social safety net continue to proliferate within our social dialogues, it is ever more important to foster discussion and mutual understanding, highlighting how small actions can support big change,” said Gochman.

Molly Gochman is a Houston-born, New York-based artist and activist, whose practice is centered around raising awareness about critical social issues—and our roles within them—through participatory and collaborative actions. Her projects have included: Buffalo Bayou Products (2006), in which Gochman developed a purchasable, faux beauty product line to draw attention to the polluted waterways of the Buffalo Bayou in Houston and to the ways in which real estate and media worked in concert to deceive the public about the issue; Traffic (2009), which highlighted, through a sound installation, the adverse effects of car traffic on bird populations; and Give-away Project I - IV (2002-2012), which invited the public to give and take material possessions of personal value, encouraging participants to consider emotional attachments to physical objects while also contemplating the impact of the amount of stuff we make, use, and discard.

Among Gochman’s most enduring and impactful works is the ongoing Red Sand Project, which she initially launched in 2014. Underlying Gochman’s social practice is a vision to inspire thoughtful consideration of the society in which we live, and more specifically how our daily actions, or in many cases inactions, contribute to negative impacts on individuals, communities, and the environment. Her work has been presented in solo and group exhibitions throughout the U.S. and is held in several important private collections. In addition to her personal practice, in 2018, Gochman launched Stardust Arts to support the development of new partnerships with artists, nonprofits, community organizers, and individual innovators.