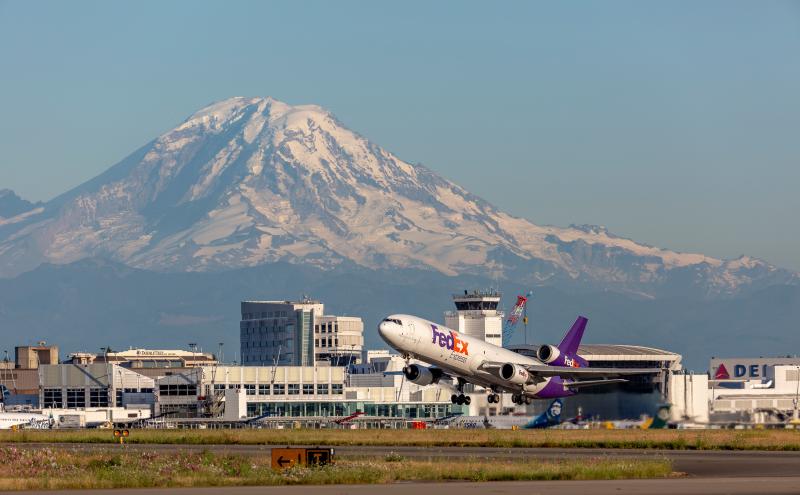 On March 12, 2020 the Washington State Legislature adjourned for the year. Priority issues for the Port of Seattle in this legislative session were anchored by the organization’s mission to promote economic opportunities and quality of life in the region by advancing trade, travel, commerce, and job creation in an equitable, accountable, and environmentally responsible manner. The Port emphasizes partnership and shared values with other governments, industries, and community organizations to improve its service to the region.

“We have entered an unprecedented era of change in our community due to COVID-19, and the Port continues to be a critical transportation hub that supports global trade and travel,” said Port of Seattle Commission President Peter Steinbrueck. “The new laws achieved in this legislative session will help improve economic equity and promote healthy communities as we look to recovery in future months."

Successful advancement of legislation included airport noise remediation and airport worker labor standards. The Port’s central priority for the last three sessions, enactment of a statewide Clean Fuels Standard, stalled in the Senate. A new proposal to improve the Port’s ability to give out grants to community organizations for public improvement projects failed to advance as well.

Action in the final week of the session focused on the state’s response to the novel coronavirus, COVID-19, with details on that legislative package below.

Legislators spent the final two weeks of session negotiating a package of bills into law that together comprise the current state response to COVID-19. The bill allocates more than $200 million from the state’s “Rainy Day Fund” for response, with $175 million going to the public health system and the remainder to a dedicated unemployment fund. The bill also:

Other measures developed as part of that package take the following actions:

More information about this response package can be found on the Governor’s Medium Page in a story from March 17, just after the bill signing.

Airport workers labor standards (SB 6217): The Port joined UNITE Here, a labor union in the U.S. and Canada that represents airline catering works, in supporting Senator Karen Keiser’s (D-33rd LD, SeaTac, Des Moines) legislation to give airport operators the authority to set labor standards. That bill passed the House and Senate and has now been sent to Governor Inslee for his signature.

The Port began the session as neutral on this proposed legislation, noting in public testimony our support for the workers the bill sought to assist but our concerns with the broad scope of the bill as originally proposed. Commissioners and staff spent several weeks negotiating with the union representatives on consensus language. The agreed-to amendments ensured that airline catering workers at Seattle-Tacoma International Airport (SEA) can benefit from new, limited authorities given to the Port Commission. Under the bill, the commission has the authority to meet, but not exceed, labor standards in place in the municipality that houses SEA for those workers.

Noise “re-insulation” proposal (HB 2315): The Port worked with Representative Orwall (D-33rd LD,  SeaTac, Des Moines) and Senator Keiser on a proposal giving port districts the authority to repair or replace failed sound insulation products previously installed at homes near the airport. That legislation passed both chambers and has been sent to the Governor for his signature.

Already with one of the most comprehensive aircraft noise reduction programs in the nation, the Port of Seattle recognizes the impact of operations at SEA on neighboring communities.

The Port is pleased that legislators in Washington state share our commitment to addressing airport impacts on communities. As a federally authorized priority airport that serves travelers well beyond the community where SEA is located, we fund sound insulation programs with FAA grants and airport revenue, typically 80 percent in grants and 20 percent from revenue. With the new law, homes that are now potentially eligible for replacement sound insulation products are not yet eligible for federal funding, and we look forward to working with the state and FAA to seek additional funding partnership to support this work.

PFAS-free firefighting foam (HB 2265): The Port of Seattle worked all session with to support legislation put forward by Rep. Beth Doglio (D-22nd LD, Olympia area) to end the exemption for airport use of toxic firefighting foam (containing PFAS) as soon as the FAA permits an effective non-toxic alternative. Port Fire Chief Randy Krause is a national leader in ending toxic firefighting foam, and acted as a credible, operational voice in the Legislature in support of this measure. It passed both chambers by wide margins and awaits the Governor’s signature.

Legislative sessions that come in even-numbered years are intended to permit modifications to the biennial budgets passed the prior year. The Port advocated for a few key priorities that serve our core mission of preserving a working waterfront, maintaining public access to the shoreline, and ensuring freight and passenger mobility throughout the Puget Sound region.

Pier 86/Fishing Pier in the Capital Budget: The final 2020 Supplemental Capital Budget included additional $750,000 appropriation to the Department of Fish and Wildlife for the reconstruction of Pier 86. That adds to the $1 million included in the 2020-2021 biennial budget, bringing the total state investment to $1.75 million . The Port owns Centennial Park, adjacent to Pier 86, and is partnering with DFW and Expedia to work on reopening the pier.

REAL ID/Enhanced Driver’s License: The House’s 2020 Supplemental Transportation Budget includes $700,000 for the Department of Licensing’s public communications and advertising to spur registration for the Enhanced Drivers’ License and other REAL ID-compliant documents.

Maritime High School proviso: Rep. Jesse Johnson took leadership of the effort to fund the Office of the Superintendent of Public Instruction’s (OSPI) engagement on the Maritime and Ocean Sciences High School concept. Commission President Steinbrueck, Commissioner Calkins, and Executive Director Metruck sent a letter to the Chair of the Senate Ways and Means Committee asking that this priority be included in the final budget compromise. The final 2020 Supplemental Operating Budget included $250,000 for this effort.

More Work To Do

Clean Fuels Standard (HB 1110): Rep. Fitzgibbon’s bill to enact a statewide Clean Fuels Standard, E2SHB 1110, once again stalled at the Senate Transportation Committee. This is the third session in which the Port has engaged in aggressive advocacy in support of the measure. As we enter the legislative interim and preparation begins for the 2021 session, staff will continue to work to understand how the need for a comprehensive transportation revenue package in 2021 impacts this long-sought policy. The Clean Fuels Standard will be subject to the same dynamics effecting a range of other issues, namely long-term impacts from COVID-19 mean for future advancement.

Reduced local match for community improvement projects (HB 2832): In late 2019, the Port worked with Rep. Orwall on legislation to ease the process for making grants under the Port’s ACE Fund and the South King County Fund. However, it failed to advance beyond the House Rules Committee this session and will be brought back in 2021.

Fitzgibbon and Carlyle bills re: GHG emissions (HB 2957): Legislation introduced by Sen. Carlyle and Rep. Fitzgibbon at the request of Governor Inslee responded to the January 2020 Supreme Court decision that found the Department of Ecology’s 2016 Clean Air Rule exceeded the regulatory authority of that agency. Both HB 2892 and SB 6628 state Clean Air Act's (CAA) definition of "emission" and "emission standard" to include both direct and indirect emissions. The Port supported these proposals as they moved through the process, and we will continue to discuss the issue with Rep. Fitzgibbon and other champions going into the 2021 Legislative Session.

About the Port of Seattle
Founded in 1911 by a vote of the people as a special purpose government, the Port of Seattle’s mission is to promote economic opportunities and quality of life in the region by advancing trade, travel, commerce, and job creation in an equitable, accountable, and environmentally responsible manner.

Port operations help support nearly 200,000 jobs and $7 billion in wages throughout the region. Over the next 17 years, the port’s “Century Agenda” seeks to create an additional 100,000 jobs through economic growth while becoming the nation’s leading green and energy-efficient port. Learn more at www.portseattle.org.

Scholarship Winners Shoot for the Stars