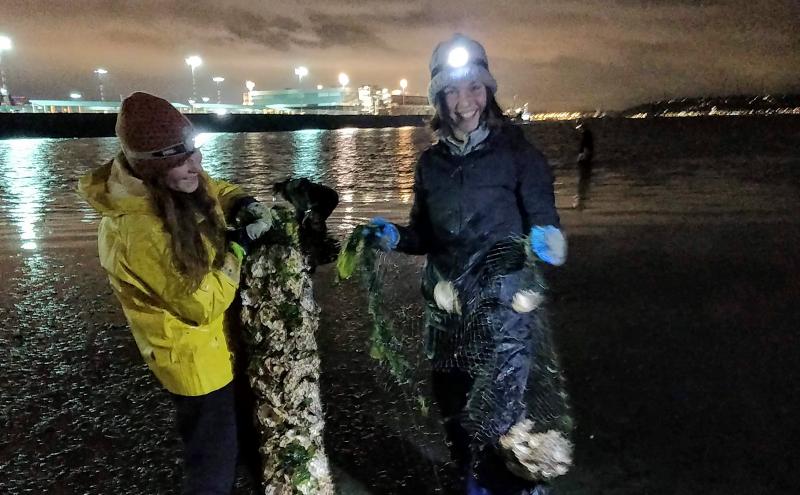 The Port of Seattle, along with Puget Sound Restoration Fund and the Washington State Department of Natural Resources, are working on an innovative ‘Blue Carbon’ pilot program to establish habitat and a native oyster bed at the north end of Smith Cove in Seattle’s Elliott Bay. The purpose of these efforts is to create habitat, trap carbon in the environment, reduce ocean acidification and improve water quality, as oysters act as filter feeders, which remove pollution from the ocean.

“Creating the kelp, eelgrass and shellfish beds at Smith Cove is an exciting approach to slowing climate change while also fostering habitat for wildlife and fish, including Chinook salmon,” said Port of Seattle Commissioner Fred Felleman. “This pilot program reflects the Port’s commitment to addressing climate change and protecting the environment.”

More than three tons of oysters have been planted in the intertidal area, covering about one-quarter acre. View map here.

“We thank the Port of Seattle for their environmental leadership and their commitment to restoring nearshore habitat,” said Betsy Peabody of the Puget Sound Restoration Fund, a partner in the pilot project. “We look forward to great results from this pilot project, along with many more years of partnership in cleaning up our ocean water and habitat.”

Blue carbon refers to carbon captured in ocean and nearshore environments, assimilated as biomass and stored in marine sediments. Blue carbon processes are critical to concerns for acidification of marine areas due to increases in atmospheric CO2. In Puget Sound, kelp, eelgrass, shellfish, and salt marsh are important elements in blue carbon processes, ensuring productive, resilient and carbon-rich marine conditions.

The pilot project to evaluate the ability to enhance blue carbon processes at Smith Cove includes the following:

Eelgrass, kelp and salt marsh vegetation sequester (or trap) dissolved carbon at a significant rate – as much as a ton of CO2 per acre annually. The Smith Cove project is expected to sequester 10 tons of carbon every year, or the equivalent of over 1,000 gallons of gasoline combustion.

In addition to sequestering carbon, eelgrass, kelp and salt marsh are the most biologically productive habitats in Puget Sound, supporting a wide variety of fish and wildlife species, including life stages of endangered Chinook salmon.

The project includes establishment of a native oyster bed in Smith Cove, with a goal to support over 1 million oysters. A single oyster siphons up to 2 gallons of water per hour, removing particulate matter and contaminants. Introduced shellfish would filter up to 50 million gallons of Elliott Bay water per day.

Acidification is one of the major threats facing Puget Sound. By removing dissolved carbon from the water, kelp, eelgrass and salt marsh buffer acidification, providing beneficial habitat for oysters and other pH sensitive species.

The project does not include structures or other components which require maintenance; if successful, it will be self-sustaining. The project also includes an experimental component that will test the viability of compost made with shellfish and kelp biomass. This marine-based organic compost will be studied and compared to conventional compost in a garden test plot at Centennial Park.

Seafood's Journey from Sea to Market to Table