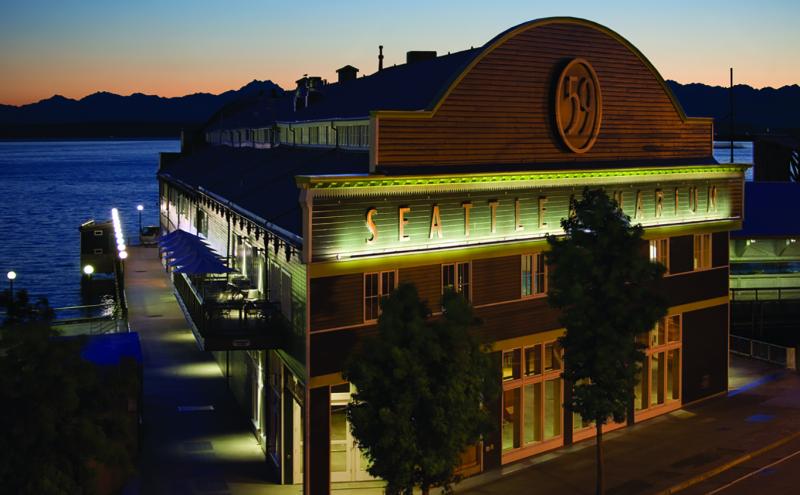 The Port of Seattle announced a new partnership with the Seattle Aquarium built around a shared commitment to the future of ocean sustainability, Seattle tourism promotion, and a thriving maritime community on Seattle’s waterfront.

“The Port of Seattle’s investment in the Aquarium’s Ocean Pavilion represents a generational opportunity to inform the public of our shared commitment to protecting the marine environment….from kelp to killer whales,” said Port of Seattle Commission President Fred Felleman. “By integrating the Port’s activities in the messaging of the Aquarium’s exhibitory in and around the Ocean Pavilion will also enable us to highlight the diversity of marine and maritime career opportunities in the region.”

“Transformational change in ocean sustainability and maritime industries will make our community more resilient, more equitable, and improve quality of life,” said Port of Seattle Commissioner Peter Steinbrueck. “The Seattle Aquarium’s leadership on conservation and education make them the perfect partner for helping the Port reach the next generation of innovative maritime scientists and industry leaders.”

“The Ocean Pavilion will be an unparalleled platform for ocean conservation and a magnificent centerpiece for our city’s waterfront,” said Bob Davidson, President & CEO of the Seattle Aquarium. “During the past decade of development, we have engaged the public, local tribes, the city, county, state, and waterfront community to create something special in the heart of our city.  The Port has been part of our waterfront and community for more than a century and we are thrilled to have their partnership as we tell the story of our one world ocean and inspire the next generation of conservationists to protect it.”

“The Ocean Pavilion at the heart of the new waterfront will help the city reorient itself back to its ocean roots and demonstrate a climate-positive approach to building as we work to make this the most deeply green (or blue) aquarium in the world.  We have targeted Living Building certification and are as importantly fully committed to making conservation education and science accessible to all communities in the region,” said Martha Kongsgaard, chair of the Ocean Pavilion capital campaign. “It will educate on sustainability increasing awareness and taking action to help preserve and protect our treasured, but troubled marine environment.”

Under the plan, the Port will commit $5,000,000 over five years for the development of the Aquarium’s Ocean Pavilion project — and expansion of the current Aquarium that is a central component of Seattle’s overall waterfront redevelopment. The partnership creates a platform for the Port and Aquarium to expand current and future collaboration, such as its early work on kelp restoration.

The new memorandum of understanding (MOU) will formalize the future collaboration, which could include engagement and education opportunities to highlight maritime environmental programs, innovations in maritime industries related to ocean conservation and storytelling highlighting diverse youth engagement. A committee will be formed by the Port Commission to include Port, Aquarium, and external stakeholders to aid in the exhibit development and programming.

A respected authority on Puget Sound and Salish Sea, the Seattle Aquarium serves as the largest educational platform for ocean conservation and engagement in the Pacific Northwest. Through expanded partnerships and community programming, the Aquarium is fostering an emerging ocean ethic, telling the “one world, one ocean” story, increasing awareness and taking action to help preserve and protect our marine environment.

The Ocean Pavilion will be a premier attraction located at the heart of our new central waterfront. It is estimated that 8 to 12 million visitors will visit Seattle’s new waterfront annually and attendance at the expanded Aquarium is projected to be 1.2 to 1.5 million per year. The Ocean Pavilion will serve as an unrivaled platform that will educate and inspire international visitors and local communities about the environmental stewardship of the marine ecosystem of the Salish Sea and broader Pacific Ocean. The Seattle Aquarium currently draws over 850,000 visitors per year, distributes more than 70,000 free and reduced tickets to underserved populations, provides free virtual and community programming throughout King County, and typically hosts more than 40,000 students each year at its facility.

The Port of Seattle has a significant governmental interest in creating a strategic relationship with the Seattle Aquarium. Education and engagement opportunities will provide a platform to highlight the Port’s marine conservation work and increase the public awareness maritime innovations and career opportunities in our region.  This partnership also supports the Port’s economic development goals to increase economic activity through tourism, workforce training, and creating port-related jobs.

Targeting a grand opening date in 2024, the Port’s $5M commitment to this project builds on current contributions made by other public entities, including $34M from the City of Seattle, $8M from King County $3.4M from the state of Washington, with further public commitments being sought from the Federal government and other entities. Half of the funding for the new publicly-owned project is being raised by the Aquarium from private philanthropic giving.

About the Seattle Aquarium

Founded in 1977 and located on Pier 59 in the heart of Seattle, Washington, the nonprofit Seattle Aquarium serves as the largest platform for ocean conservation and engagement in the Pacific Northwest. With a mission of Inspiring Conservation of Our Marine Environment, it leads educational, conservation, and regional research initiatives for a healthier planet. A thriving and vibrant Aquarium is a key part of Seattle. Help support the Aquarium by donating at SeattleAquarium.org/donate.