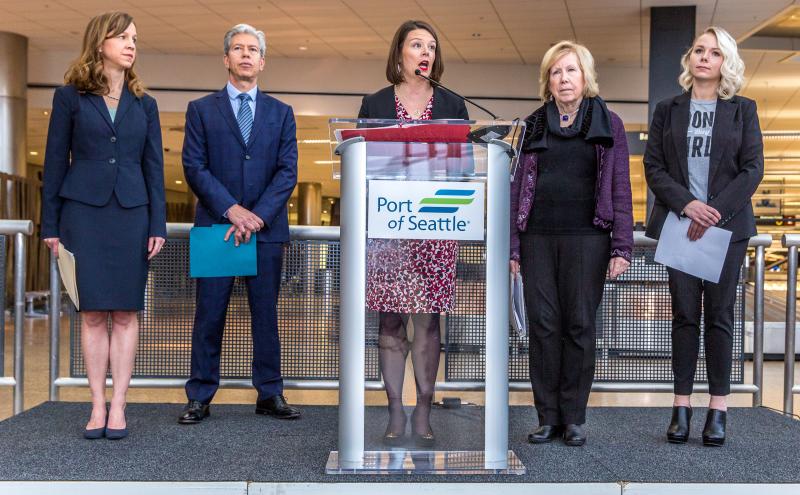 Enhanced training and public awareness will be part of the program

In cooperation with local advocates and recognizing January as National Slavery and Human Trafficking Prevention Month, the Port of Seattle today announced a new comprehensive port-wide strategy to combat human trafficking through its facilities, including Seattle-Tacoma International Airport, and throughout the region. Once fully implemented, this strategy would not only position the Port as a regional leader on the issue, but also one of the top ports in the country implementing anti-trafficking efforts. The Port Commission officially passed a resolution on the issue in their meeting yesterday, calling for a combination of training, resources, policies and partnerships to address this important issue.

At a press conference today, the Port joined with Businesses Ending Slavery and Trafficking (BEST) and King County Councilmember Jeanne Kohl-Welles to highlight the importance of the issue for the region. The Port’s strategy will focus on four areas: ensuring all employees have access to training and education; utilizing Port facilities and communications channels to raise public awareness; collaborating with nonprofits, government agencies and private sector partners to maximize impact; and ensuring Port policies and procedures are up to date to report suspicion of human trafficking.

“Human trafficking is not just a global issue, it’s a local issue,” said Courtney Gregoire, Port of Seattle Commission President. “The Port has been engaged in this topic for years but now is the perfect opportunity to increase our regional leadership on this topic. As a major employer, an operator of an airport and maritime facilities, and a partner, we can do more to reduce demand, assist victims and raise public awareness.”

Every year, millions of men, women, and children are trafficked in countries around the world, including the United States. It is estimated that human trafficking generates billions of dollars of profit per year — second only to drug trafficking as the most profitable form of transnational crime. Human trafficking is modern-day slavery and involves the use of force, fraud, or coercion to obtain some type of labor or commercial sex act.

“As an organization that equips employers to prevent human trafficking, we are so pleased to be working with the Port of Seattle to develop and implement their anti-trafficking strategy,” said Dr. Mar Brettmann, Executive Director of BEST. “I have been incredibly impressed with the thoughtfulness and dedication that the Port has shown in developing their strategy, which has the potential to be hugely impactful at reducing both trafficking supply and demand in the Puget Sound region.”

A 2012 International Labour Organization study estimates that there are 20.9 million victims of human trafficking globally: 68% of them are trapped in forced labor, 26% of them are children, and 55% are women and girls. A 2016 U.S. Department of Labor report identified 139 goods from 75 countries made by forced and child labor.

"It is my hope that other ports and regions will take note of the collaboration between the Port of Seattle and advocates,” said Kyra Doubek, CSEC Behavioral Health Specialist for KYFS, and survivor of domestic sex trafficking. “Noteworthy is their commitment to develop policies around any involvement in human trafficking activities. Only through partnership and commitment can we create lasting change. As an employer committed to growing to 300,000 employees, the Port is uniquely positioned to create a culture and set an example in our state and region for how to conduct business and contribute to social equity and safety. The Port is sending a clear message to traffickers and sex buyers: not in our state, not in our facilities."

Washington state had the 14th highest call volume to the National Human Trafficking Hotline in 2015. In King County, an estimated 300-500 children are prostituted annually, some are as young as 11 years old; there are over 100 websites for soliciting sex in the Seattle area, many of which are used for human trafficking purposes.

“Human trafficking is an extreme violation of human rights that threatens the health and welfare of residents, families, and our communities,” said King County Councilmember Jeanne Kohl-Welles. “I helped lead the fight against human trafficking as a State Senator in Olympia for 13 years, and am continuing work on this issue in my capacity as a Councilmember by addressing the issue of labor trafficking and economic exploitation specifically. The Port’s engagement on this issue will be invaluable as we move forward to stop this crime against our residents and visitors.”

“As a leader in the fight against human trafficking, Delta is deeply passionate about this issue and is proud to stand with the Port of Seattle as they expand their leadership and resources,” said Tony Gonchar, Delta’s Vice President – Seattle. “Together with the Port and our airline partners, we will continue to be relentless in fighting for those who can’t fight for themselves.”

More details about the Port Action