Port of Seattle Restores Habitat and Removes Over 2,000 Creosote Pilings 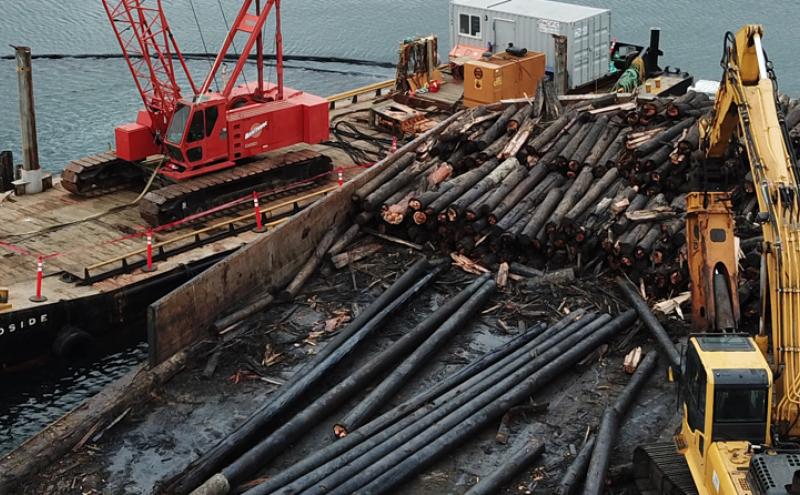 Project started in October of 2017, scheduled for completion in March 2018

The Port of Seattle is restoring 4.5 acres of habitat along the shoreline of Terminal 5, while getting closer to its goal of removing 90 percent of creosote pilings from its properties. The 2,300 creosote pilings removed leave the Port with around 8,000 remaining out of a total of 18,000 estimated in 2000.

“Restoring shoreline habitat and removing creosote pilings is a great way to return natural vitality to our ecosystem,” said Commissioner Fred Felleman. “The Port of Seattle is on track to remove thousands more creosote pilings by 2025.”

“I want to thank the Port of Seattle for removing creosote-treated pilings, which harm the health of Puget Sound. By partnering with agencies like the Port, the Department of Natural Resources is leading efforts throughout Puget Sound to restore habitat and remove creosote pilings and debris from our waters. I look forward to further partnership with the Port and leaders like Commissioner Fred Felleman as we continue this important work,” Hilary Franz, Commissioner of Public Lands.

“The Duwamish River Clean-up Coalition/Technical Advisory Group aims to further equity in the Duwamish Valley; improve the health and well-being objectives identified and prioritized by these disproportionately affected, predominately underserved communities; and promote a thriving economy in this geographic area,” said James Rasmussen, Executive Director of the DRCC/TAG. “We support the Port of Seattle in these piling removal and habitat restoration efforts.”

Creosote-treated pilings and timbers were used for more than 100 years throughout Puget Sound, as fundamental structural elements in marine cargo and transportation infrastructure. Present-day marine facility piers and docks have replaced creosote construction with inert steel and concrete pilings, and in many instances fender systems requiring no piling have been installed. This benefits wildlife since it requires less structural pilings and less over-water coverage. In addition, older and unused over-water structures and their creosote pilings and dock materials have been removed.

The Port’s habitat restoration program, called the PORTfolio, is focused on innovation. The Port is involved in several research/pilot projects with the University of Washington, King County, and a Puget Sound Restoration Fund that will explore new ways to improve habitat. These include the “Floating Wetland Islands” project and Smith Cove Carbon Sequestration Pilot Study.