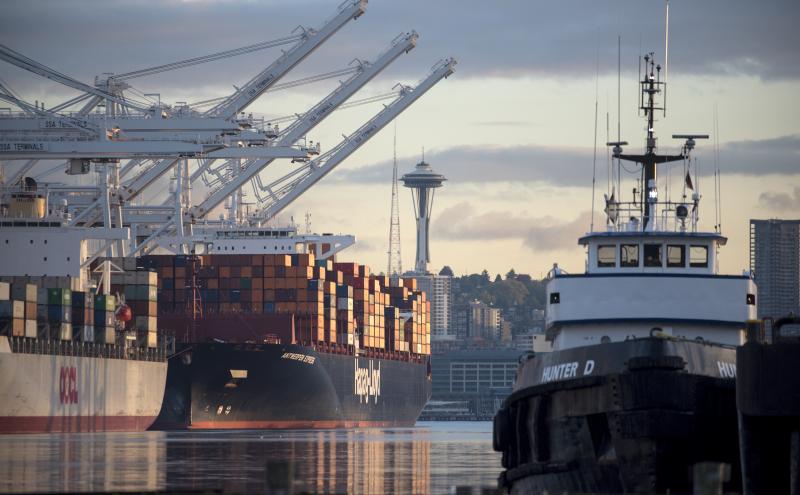 A recent report compiled by the Puget Sound Maritime Air Forum, a committee of seven ports, six government agencies, and three industrial partners, shows maritime-related air pollutant emissions decreased in nearly every sector between 2005 and 2016. Results showed that air pollutant emissions decreased by up to 97 percent, depending on the type, including 69 percent for fine particles, which are harmful to human health.

[Discover what elected officials, stakeholders and partner agencies are saying about the latest emissions inventory here.]

The emission reductions resulted from voluntary investments by the maritime industry and efforts by government agencies in cleaner engines, fuels and operational efficiency, as well as regulations that stipulated more stringent emission standards for new engines and cleaner fuels.

The first inventory was conducted in 2005 with updates performed every five years (2011 and 2016) to track emission reductions over time and ensure that emission estimates remain current.

The Puget Sound Maritime Air Emissions Inventory (PSEI) is an accounting of air emissions from maritime-related equipment operating in the greater Puget Sound region. The inventory was conducted voluntarily to provide a strong technical foundation for future environmental programs, initiatives, and policy decisions. Data summarizing maritime operations and equipment use were collected from ports, individuals, agencies and maritime companies that use vessels and equipment.

This inventory includes black carbon emissions for the first time. Black carbon is a ‘short term climate pollutant’, meaning it only stays in the atmosphere for days to weeks as opposed to carbon dioxide that has an atmospheric lifetime of more than 100 years. Although it does not remain in the atmosphere long, its short-term climate potency is far greater than carbon dioxide. Recent studies have highlighted black carbon’s impact on climate change: for example, black carbon that settles on snow packs absorbs heat from the sun, increasing the rate of melting. More research is needed on estimating black carbon because there are few widely agreed upon emission factors for mobile sources.

The inventory results will be used to help guide and focus future emissions reduction efforts and investments. These initiatives include updating the Northwest Ports Clean Air Strategy, a formal plan among The Northwest Seaport Alliance, a partnership of the ports of Seattle and Tacoma, and the Port of Vancouver, B.C., to reduce diesel and greenhouse gas emissions.

These results will be used for further community outreach in areas historically disproportionately impacted by air pollution from multiple sources. Feedback and involvement from community stakeholders is expected in the coming months, as continued reduction goals are identified.

Find more information about the emissions inventory and its results at www.pugetsoundmaritimeairforum.org.