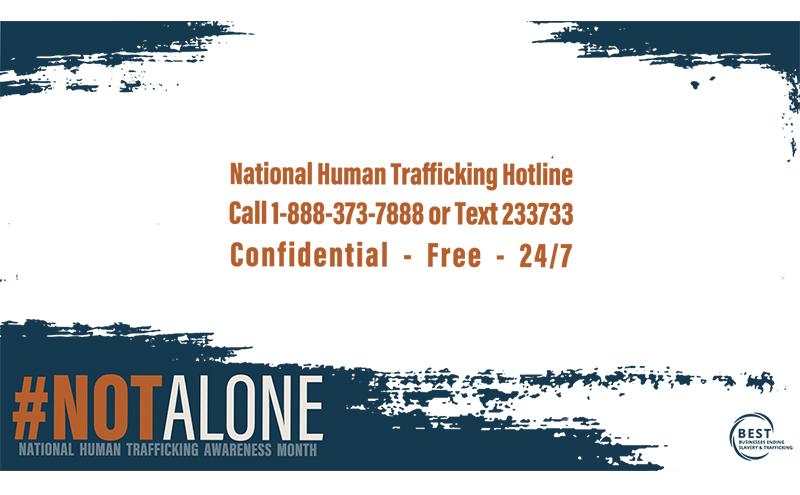 In observance of Human Trafficking Awareness Month, cities, counties, transit authorities, airports, and seaports across Washington and beyond are combining forces to prevent human trafficking with the Not Alone campaign, our first-ever statewide initiative to encourage victims of human trafficking to seek help.

Not Alone was conceived and launched in Washington state by Rebekah Covington, a survivor of human trafficking and Corporate Relations Manager at BEST (Businesses Ending Slavery and Trafficking), to raise awareness about human trafficking and help victims and survivors self-identify and get connected with services by calling the National Human Trafficking Hotline at 1-888-373-7888 or texting 233733 (BEFREE).

“When people are trafficked, they feel isolated and with an inability to leave the situation,” explained Covington. “To create this campaign, we prioritized input from people with the lived experienced of trafficking. People experiencing trafficking will see signs that speak directly to them to give them hope that they are not alone — there is a way out of whatever terrible situation they are in.”

Not Alone is one of the first campaigns to focus on victim and survivor self-identification rather than general public awareness. Surveys of trafficking victims indicated that 38% traveled by plane at some point during their exploitation, 63% reported using mass transit during their exploitation, and 26% reported that public and mass transportation played a role in at least one exit attempt.

“We are doubling down on our commitment to ending human trafficking for a fourth consecutive year,” said Port of Seattle Commissioner Sam Cho. “Displaying these posters at Seattle-Tacoma International Airport and the Port’s maritime facilities helps to ensure that anyone who sees them knows they are not alone and there is help. We pair this work with required employee training, so our team knows how to spot and interrupt this pandemic of human rights.”

The Not Alone posters and BEST’s online training direct individuals to contact the National Human Trafficking Hotline. The Hotline is available for anyone to call 1 (888) 373-7888, text 233733 (BEFREE), or chat online at https://humantraffickinghotline.org/. The Hotline is free and available 24/7/365. It is available in English and Spanish, in addition to 200 other languages.

“Campaigns like Not Alone and the online training courses that BEST provides are proven to increase reports of human trafficking so that individuals can receive assistance. We are absolutely thrilled to see so many cities, counties, transit authorities, airports, and seaports all aligned to help trafficking victims get the help they need."
BEST CEO Dr. Mar Brettmann

“In Washington, we have effective tools to help survivors escape human trafficking and re-start their lives on their own terms. But too often, they don’t know where to turn. The Not Alone campaign will make a big difference in putting those tools to greater use, by using creative new approaches and effectively getting the information out to those who need it. By building awareness and trust among survivors, this campaign will save lives.”
Senator Karen Keiser

“This campaign is more than an effort to inform survivors and victims of human trafficking that there is help available. It’s about dismantling fear and fostering trust in a world where these individuals have lost hope. I sincerely believe the Not Alone campaign will change lives.”
Representative Tina Orwall

"Every person has the right to be safe, and that’s why King County has partnered with the statewide 'Not Alone' campaign to help raise awareness of the life-changing resources to prevent human trafficking with in-language materials and signage in highly-visible locations across the Puget Sound region, including King County Metro's transit network.”
King County Executive Dow Constantine

“The upcoming statewide campaign represents a significant, coordinated effort to increase awareness of human trafficking. As a region with a major international port and international airport and being close to an international border, it’s crucial that King County continue finding new and creative ways to combat trafficking and make the region a safer place for all to live and work. After our County’s successful regional campaign, I’m pleased that BEST is helping to expand this statewide and am hopeful that this will empower victims and survivors of trafficking across the state.”
King County Councilmember Jeanne Kohl-Welles

“Too often, human trafficking is a crime that occurs hidden in plain sight, which is why it is crucial that we work to educate folks on how to recognize and report signs of trafficking or seek help if they need it. As we’ve seen in King County—where our regional human trafficking awareness campaign led to a significant rise in the number of calls to the National Human Trafficking Hotline—these efforts to build awareness work. I’m grateful to Businesses for Ending Slavery (BEST) for coordinating the expansion of this campaign statewide so that more victims and survivors of trafficking can reach help.”
King County Councilmember Reagan Dunn

“Human trafficking is a serious concern in Spokane and eastern Washington. Raising awareness of the magnitude of the problem is a first important step. If you are a victim, you need to know that law enforcement is looking for you and resources are in place to help you. And if you are a family member, there are steps you can take to protect your loved ones.”
Spokane Mayor Nadine Woodward

“Every person we can rescue from the clutches of human trafficking is a victory for our community. We cannot look the other way when children and adults are being commercially exploited on our streets. SeaTac was built on the very idea of creating a safe, thriving city that protects its community from harm.”
SeaTac Mayor Erin Sitterly

“Research shows that more than a quarter of human trafficking victims say public transportation played a role in their attempt to exit trafficking. This places transit agencies in a unique position to be vigilant and aware and assist victims to safe spaces. At Pierce Transit we are committed to doing all we can to help, from training employees about how to recognize signs and intervene, to posting informational signage throughout our system.”
Pierce Transit CEO Mike Griffus

“Human trafficking happens year-round, everywhere. Dedicating the month of January to raise awareness and educate people casts a wide net and will hopefully result in more people speaking up to stop this atrocious crime. In Pierce County our Prosecuting Attorney’s Office has a unit dedicated to investigating and prosecuting those involved with human trafficking. Thank you to all our partners who work together to bring attention to this growing problem of sex and labor trafficking in our region and beyond. If this campaign saves one life, it is worth it.”
Pierce County Councilmember Jani Hitchen

BEST is a Seattle-based nonprofit that educates employers to prevent human trafficking and creates pathways to employment for survivors. Founded in 2012, BEST has provided training for more than 11,000 employers in the hotel, aviation, maritime, and transportation industries to recognize and respond to potential cases of human trafficking at their workplaces. To learn more, BEST's website.

Founded in 1911 by a vote of the people as a special-purpose government, the Port of Seattle’s mission is to promote economic opportunities and quality of life in the region by advancing trade, travel, commerce, and job creation in an equitable, accountable, and environmentally responsible manner. The Port owns and operates Seattle-Tacoma International Airport, Fishermen’s Terminal — home of the North Pacific fishing fleet — and public marinas. The Port also owns two cruise ship terminals, a grain terminal, real estate assets, and marine cargo terminals through its partnership in the Northwest Seaport Alliance. Port operations help support nearly 200,000 jobs and $7 billion in wages throughout the region. Over the next 17 years, the port’s “Century Agenda” seeks to create an additional 100,000 jobs through economic growth while becoming the nation’s leading green and energy-efficient port. Learn more on the Port of Seattle website.