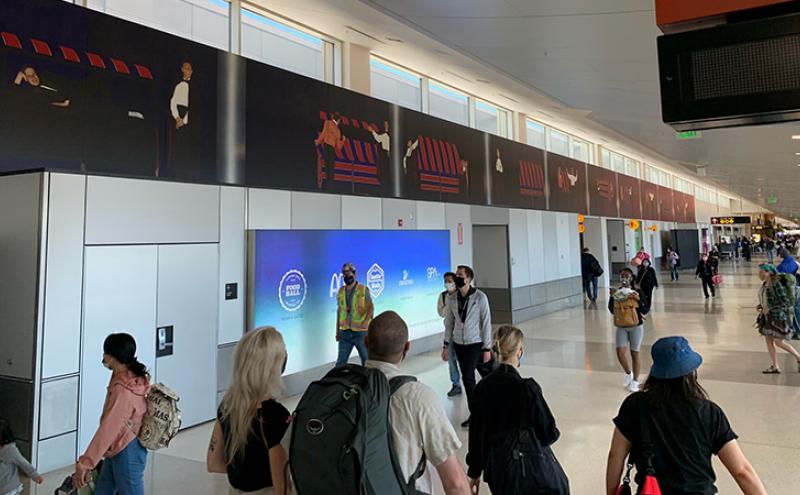 Whether you love it or hate it, one thing is for sure — everyone has an opinion about the mysterious High Wire painting at SEA Airport and a different theory behind its meaning.

Taken literally, the 180-foot-long mural, created by Seattle-artist Michael Fajans, shows different stages of a vaudeville performance through a sequence of 11 images depicting a magician and his assistant. At first glance, this may feel out of place in an airport, but there is more to this illusion than meets the eye….

At the end of 2020 the infamous painting magically vanished from its home on D Concourse only to reappear over security checkpoint 2 in Concourse A earlier this month. This disappearance was no magic trick, but necessary for cleaning and restoration to preserve this enigmatic piece.

Over four nights, Port Senior Art Program Manager Tommy Gregory and Port Construction Services (PCS) reinstalled the 11-piece painting in a light-filled space in its new protected home above eye level after it was taken offsite for cleaning and restoration.

Here are six magical facts about the Port’s art restoration program and the High Wire piece.

1.    High Wire is a metaphor about air travel

Like most magic tricks, to uncover the true meaning behind High Wire, you’ll have to dig a little deeper.

The series of images illustrates a magician and his assistant performing a magic trick that begins in one place and ends at another, similar to the act of flying or traveling.

In the painting, the viewer can see a magic trick unfolding around an empty magic box. It can be viewed two ways, adding to its mystique.  Looked at one way, a figure eventually appears out of the magic box or, if viewed in the opposite direction, the figure disappears in the box.

When the Port commissioned Fajans in the early 1990s to create this work, he integrated the airport backdrop into the theme of the piece. The result is a mural about arrivals and departures that travelers can view while in transit. Fajans had full creative control of the piece.

“I love that nobody micromanaged what his subject matter was,” Gregory said. “Whoever was on the selection panel let him make his art the way he wanted and see his vision to fruition.”

Fajans was well-respected in the art community, and when he passed away in a motorcycle accident in 2006, his career was really blossoming.

2.    The painting is so realistic that many people mistake it for a photograph 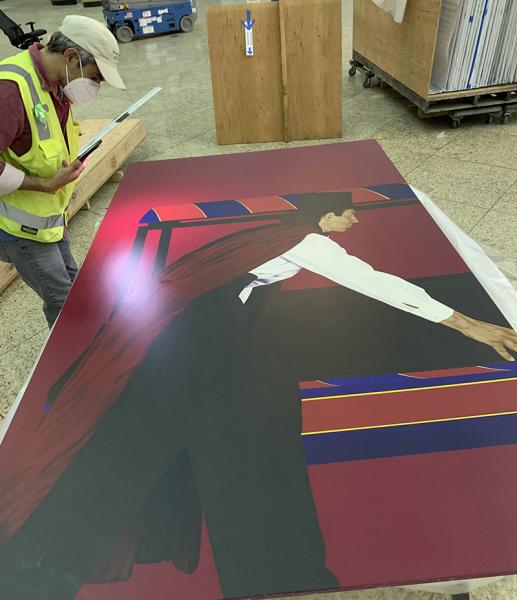 The series of images of the magician and his assistant may look like a series of photographs, but they actually make up one of the only “photorealistic” paintings in SEA’s collection. The process of creating these hyper-realistic depictions is a difficult one and requires countless layers of airbrushed pain to produce varying degrees of shadow and textures.

“The fact that it is so lifelike shows that the artist had remarkable skill with his ability to handle airbrush and paint,” Gregory said.

3.    High Wire has served as an important conversation piece for people to talk about art

High Wire is one of the most talked about pieces of art in SEA’s public art collection. People are so intrigued by this piece that many have taken to social media to discuss the painting and some have engaged with Gregory directly.

“Whether people like it or not, I embrace that it’s a conversation piece. It would be sad if people ignored it. I think it’s great that some people love it, while some question why it is there, it’s about engaging with public art. Any response to art is a positive thing.”

4.    By continuing key restoration projects during the pandemic, the Port has prioritized supporting local artists during tough times 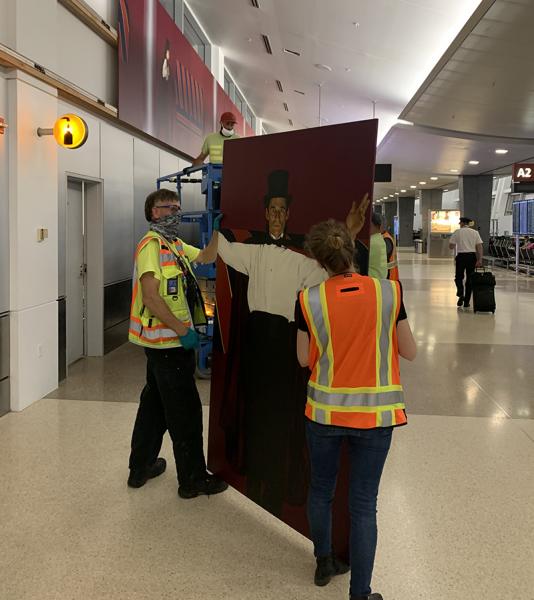 As budgets tightened during the pandemic, Gregory fought to keep the cleaning and restoration process moving with High Wire.

“We made the case that during a period of tough times for the creative community in Seattle, there was a need to push forward and engage with a local conservator to help clean and restore the piece,” he said.

Gregory enlisted the help of Seattle-based art conservator, Peter Malarkey, who has lived in Washington state since the 1980s and has a second studio in Port Angeles. Malarkey was a great fit to work with High Wire. He knew Fajans before he passed away, and emotionally really connected to the piece.

Gregory said prioritizing support of local artists and small businesses aligns with Port goals to direct resources where they are needed the most as we work towards an equitable economic recovery.

“It is evident in how we take care of our art assets and people who are trying to make a living and how we support small businesses,” he said. 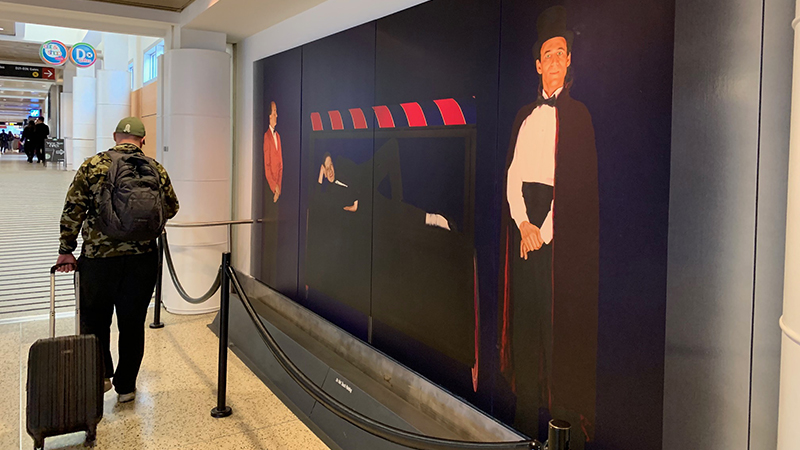 Because High Wire was situated at eye level since it was first installed at SEA in 1993, it was more vulnerable to damage from passersby and day-to-day activities.

When Gregory evaluated the piece for cleaning and restoration, he saw that some of the panels were in really great condition, and some had minor damage.

Gregory described the restoration of High Wire as a several months long process. The painting was at a touchable level for so many years, so there were coffee stains, splashes from routine cleaning and airport maintenance, residue from polish, and other blemishes.

“The conservator can use water soluble agents that take off that first layer of gunk,” Gregory said.

As part of the restoration process, the restorer takes a giant magnifying class, and inspects the piece like a surgeon.

“It’s like a forensic scientist looking at artwork,” Gregory said. “At the Port we looked at how to repair it, and assessed that we didn’t have all the tools, so we commissioned Peter Malarkey.”

Gregory worked with the Port Construction Services team (PCS) to remove and take the 44-panel piece apart from its location on the D Concourse and prepare it for safe delivery to Malarkey’s studio in Port Angeles.

Placing High Wire in a bright new location above eye level will bring new life into the painting and help keep it safe in the future, Gregory said.

“It will be easily viewable but out of the egress of visitors,” Gregory said.

6.    The Port art team assesses each piece of public art in its collection twice a year to determine whether sprucing up is needed 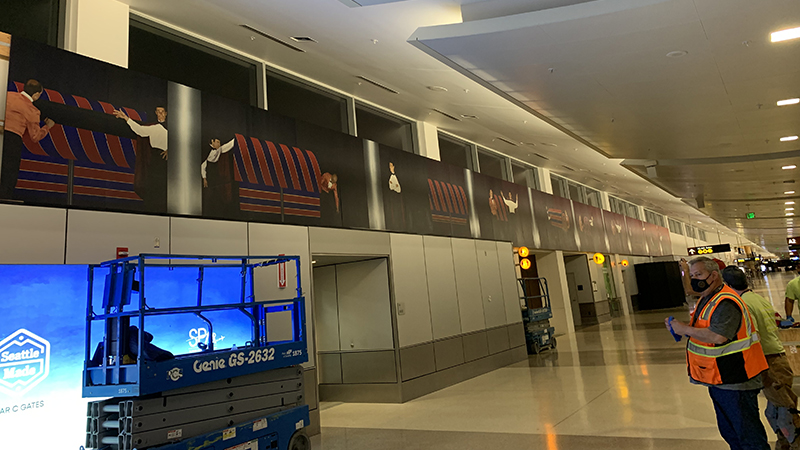 Gregory and Port Art Program Specialist Sarah Crouse (SEA contractor) perform a comprehensive visual assessment of SEA’s public art collection twice a year. This includes a thorough walkthrough of each of the pieces, and they perform time sensitive maintenance as soon as possible, which may include cleaning, dusting, or polishing. Larger jobs that don’t need to be resolved immediately get added to the following year’s budget.

Gregory has a background in art conservation, which has helped him develop a systematic approach to performing conservations and cleaning assessments on pieces throughout the airport. Preventative maintenance helps keep the art in the public eye in good condition and saves a lot of money in the end.

“We have one of the longest running public art programs in the country and we have a rich art community in Seattle,” he said. “We want to take care of the things we bought and be good stewards of art.”

Do you love High Wire as much as we do? Share your favorite magician shots and tag #magicalmomentsatsea, #flysea, and @flysea. 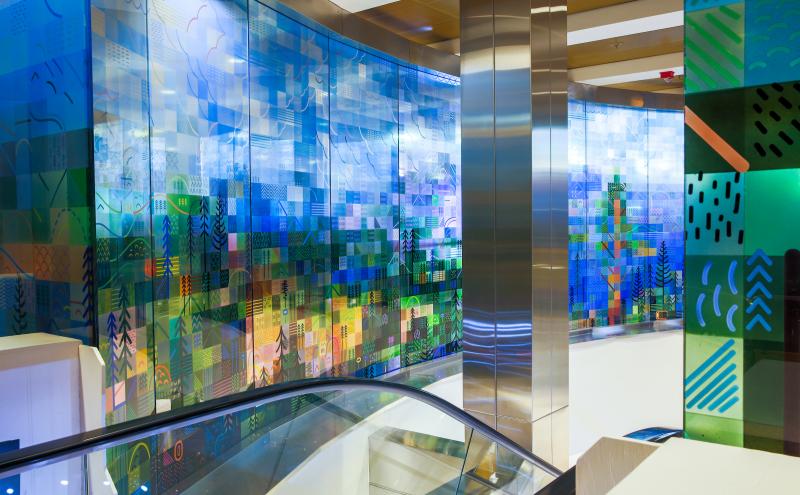 The Port of Seattle has been an active proponent of public art since the late 1960s, and the first public agency in the region to establish a public art collection. The Portâs Public Art Program con... 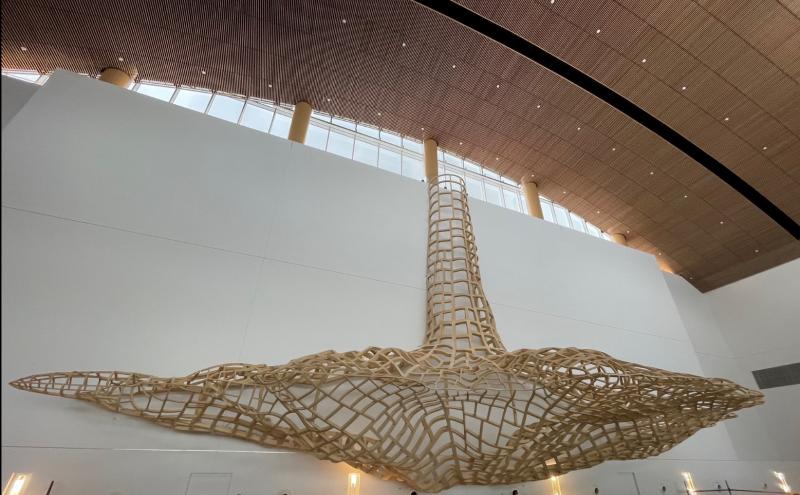 An Ode to Nature: Art in the N Concourse

The art collection at Seattle-Tacoma International Airport (SEA) adds to the travel experience by augmenting the aesthetics of the terminal and creating a Pacific Northwest sense of place. The expande... 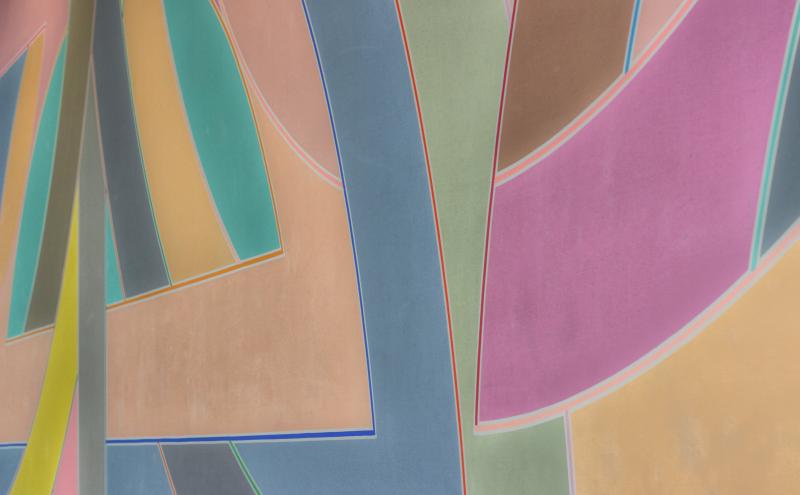 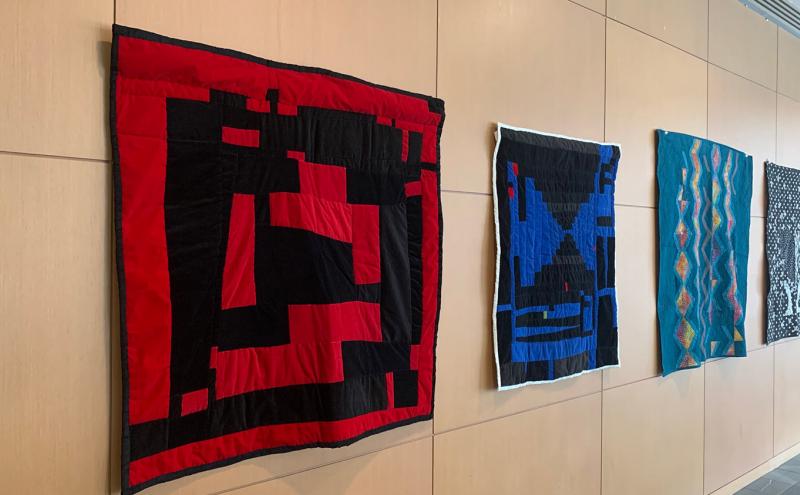