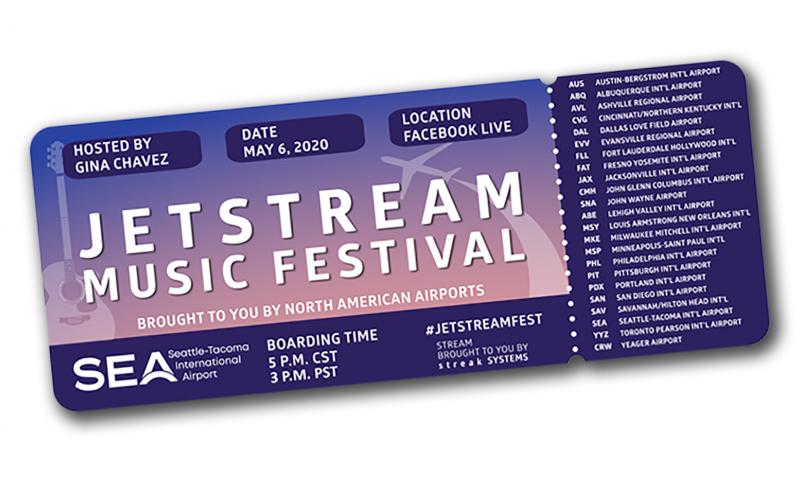 For one night only, more than twenty airports across North America will come together for the JetStream Music Festival, an online celebration of the local musicians who entertained at airports during our travels. Hosted by Austin-Bergstrom International Airport from the “Live Music Capital of the World” in Austin, Texas, the free, multi-hour livestream will take place at 3 p.m. PT on May 6 on participating airports, including SEA’s Facebook Live. Each airport will feature a musician local to their city in support of the creative community during the COVID-19 crisis.

“At SEA, we are open and operating for essential traffic, but it’s not business as usual and a big part of that is missing our treasured live local performances in the terminal,” said Lance Lyttle, SEA Airport Managing Director. “This will be a great reminder to showcase the diversity of music in the Pacific Northwest as well as around the country. Our music is truly an extension of our community’s love of all things local – and we can’t wait to get them back soon.”

The lineup features a diverse range of acts, representing each city’s unique music culture. Austin’s Latin pop songstress, Gina Chavez, will perform and host the event while SEA’s own Tomo Nakayama will perform original folk/pop tunes live from his home studio. The ‘Locals Only’ Artist of the month of March on 107.7 The End is a regular feature on KEXP and praised by critics from NPR to The New York Times.

Festival viewers will be able to tip musicians throughout the performance and learn about organizations assisting the communities in each city. SEA is encouraging travelers to donate to The Vera Project’s COVID-19 Relief Fund supporting the local community of musicians, artists, gig workers, and non-profits. Viewers can also join in the celebration using the hashtag #JetStreamFest.

“For so many airports across North America, live music entertainment in the terminal has become a fun way to delight and engage passengers,” said ACI-NA President and CEO Kevin M. Burke. “Despite the sudden and significant drop in passenger traffic at North America’s airports because of the coronavirus health pandemic, this effort by Austin-Bergstrom International Airport and many other North American airports provides a unique opportunity to connect with their passengers.”

Beyond the music, viewers will hear from leadership at many of the airports. Airports across North America remain open for essential travel and vital cargo. Employees in these facilities are working around the clock on enhanced cleaning operations, continued airport maintenance and operations, security, and more. Airports are a critical component to the supply chain—including for medical supplies—and continue to provide services for those who must travel.

In 2012, our live music program was introduced to showcase the diversity of music culture in the Pacific Northwest and enhance the terminal experience. Presented by the SEA Airport Dining and Retail Tenants, since the launch more than 115 musicians have performed at SEA, with seven different locations scheduled daily (and another one to be added next year) before the COVID-19 crisis hit. Just last year, over 1,400 gigs were played, including the first set for a debut album at an airport by Allen Stone!

You can still find information on the SEA Music Program as well as connecting with a variety of artists outside the airport experience with the SEA Presents A Virtual Concert Series. Find one of your favorites from your most recent travels and relive the memories of that trip!

“Austin is the Live Music Capital of the World. Typically, we have 31 live performances across 7 stages in our terminal. Live music and supporting our local artists is who AUS is, even during the difficult times,” said Jacqueline Yaft, Chief Executive Officer of Austin-Bergstrom International Airport.  “Airports are known for bringing people together, and we want to continue doing so even when you can’t travel. Virtual music is a great way to do that.”

The livestream will be brought to you by Streak Systems, a tech concierge focused on creating and maintaining technology systems in your home, work, and live events.