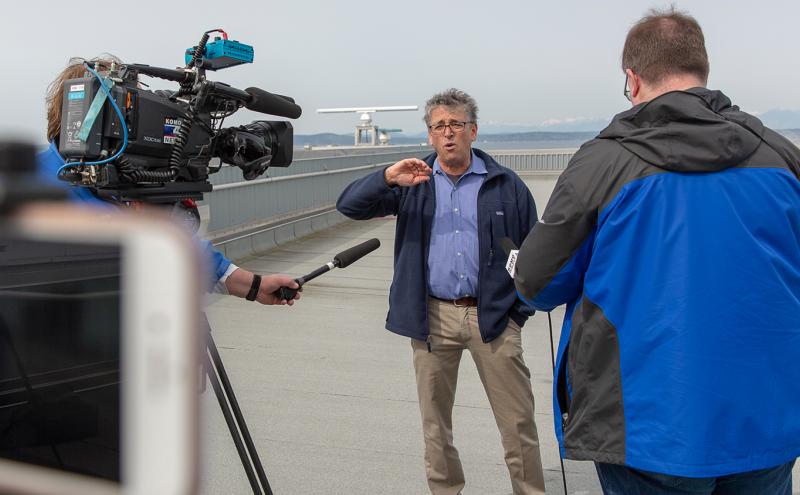 The Port of Seattle unveiled its latest solar panel installation on top of its headquarters at Pier 69. The Port’s Century Agenda calls for “meeting all increased energy needs through conservation and renewable sources.” The project is jointly funded by the Port of Seattle and a grant from the Washington State Department of Commerce.

“The Port of Seattle is affirming its commitment to be the cleanest and greenest port in the United States,” said Port of Seattle Commissioner Fred Felleman. “With the installation of this solar array on top of Port headquarters, we are shining the light on the Port’s commitment to reducing our greenhouse gas emissions.”

The project took several months in which 390 ITEK monocrystalline solar panels were installed, allowing this photovoltaic system to generate over 127,000 kWh annually, which will offset greenhouse gas emissions by 1.8Mt of carbon dioxide. For Port-owned emission sources, the goal is to reduce greenhouse gas emissions 15 percent by 2020, 50 percent by 2030 and be carbon-neutral or negative by 2050 compared to 2005.

“Commerce is proud to assist the Port of Seattle with support from Washington State’s Clean Energy Fund for this solar array,” said Brian Young, the Governor’s Clean Technology Sector Lead. “Helping to provide energy from renewable sources allows entities throughout the state to reduce their carbon footprint while expanding opportunities in the clean technology sector.”

Solar panels were installed as a pilot program in late 2017 on top of Net Shed 5 at Fishermen’s Terminal. During the first year of operation, the array produced over 18,000 kWh, a 60 percent increase over the initial projections of 11,000 kWh for the entire year. With the property using 10,000 kWh per year to power, the electricity produced renders Net Shed 5 “net zero,” with any remaining energy produced distributed to other buildings within the Fishermen’s Terminal.

Local business Puget Sound Solar installed the panels completing this project on budget, with the system now producing power, demonstrating renewable energy generation as a viable option to reduce emissions, stabilize energy costs and develop a reliable asset at the Port of Seattle.

Learn more about Solar Power at the Port.