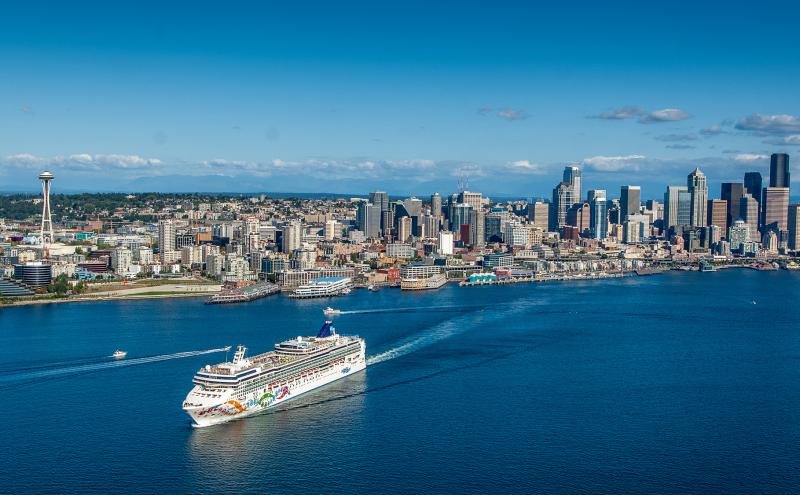 2017 was a record setting year for the Seattle cruise business, surpassing 1 million annual passengers for the first time in its history. The 2017 summer cruise season produced over $500 million in annual business revenue, $18.9 million in annual state and local taxes, and supported 4,029 jobs—and there is still room for growth. In fact, one of the objectives of the Century Agenda is to double the economic value of cruise traffic to Washington State.

Less than 30% of cruise passengers are locals to Seattle and the Puget Sound region, with many coming from out of state. As each ship returns from Alaska, travelers with early flights out of Sea-Tac usually head straight to the airport—as do travelers with later flights. While there might be time to explore Seattle, no one wants to drag their luggage around with them. So they instead attempt to check in early, then spend wasted hours languishing in front of their gate, eyes firmly locked on their mobile devices until departure.

In 2016, Mike Ehl and Jeff Hoevet of Aviation Operations, Mike McLaughlin and Marie Ellingson of Cruise and Maritime Operations, and Rosie Courtney of Public Affairs convened a work group with representatives from the airlines and cruise lines. They met to discuss how opening up check-in options at the cruise pier might smooth out the unnecessarily heavy rush of cruise passengers arriving to the airport all at once each morning.

To test an idea, the Port partnered with Delta Airlines on a pilot program at Terminal 91 during the final nine weeks of the 2016 cruise season. Between 3,000 and 5,000 passengers participated in a program where customers were offered airline check-in as soon as they got off of the ship. Approximately 6,500 bags were processed and delivered, at an approximate cost to the Port of $180,000. While the pilot project showed that customers welcomed a check-in option, the pier had little room to spare, customers were still carrying bags from the ships themselves, and the program was limited to Delta passengers.

Still, the test showed that an early check-in concept could succeed, so in 2017, the Port went bigger. The expanded Port Valet program enabled passengers to receive their boarding pass and baggage tags before their ship even reached Seattle. Prior to disembarking, passengers could place their luggage outside their cabin door, and staff would deliver it directly to the airport. Conveniently checked-in and liberated from their bags, passengers were free to extend their vacation a few more hours and enjoy the city.

The cruise lines had previously offered this type of service to passengers for a fee. Under a new proposal, the Port took a bold step: investing significant funds to sponsor the service at no cost to the customer and offering it to everyone eligible. As a complimentary service, passenger participation grew significantly.

The program included all domestic airlines in partnership with 5 of the 7 cruise lines. Over 63,000 passengers participated throughout the full season, and over 71,000 bags were processed. The Port’s share of the program cost approximately $545,700, well below the $1.5 million budgeted. Meanwhile, happily unburdened passengers spent an approximate total of $4 million at local businesses, restaurants, and attractions before finally departing.

The Port Valet program is a stellar example of the public and private sectors teaming up to advance an idea that benefits the entire region. The Port used its unique position as steward of both the airport and the seaport to bring the cruise lines, airlines, local businesses, and tourism organizations closer together—and “One Port” collaboration increased within our own organization as well.

With the 2018 cruise season in progress, the Port Valet program has expanded further, encompassing all 7 of our cruise lines partners for the first time. It’s also working with Visit Seattle to further promote the program. Congratulations to the Port Valet team on earning the 2017 Annual Innovative Idea Award.