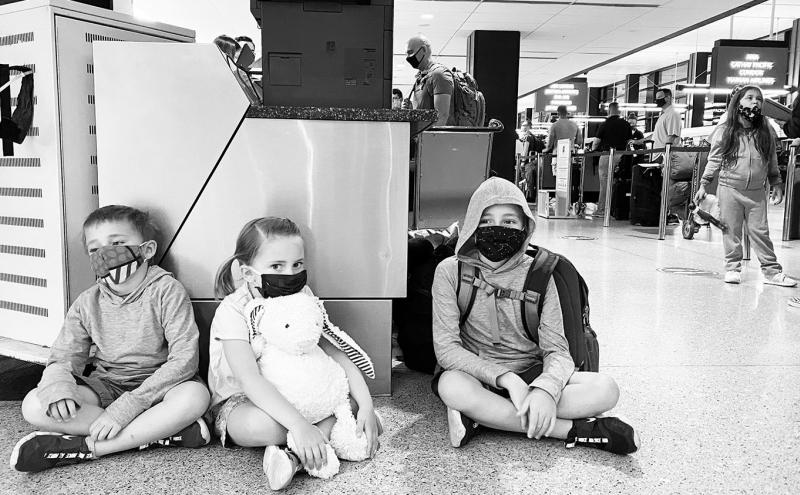 In our Essential Travel series, we check in with people using Seattle-Tacoma International Airport (SEA) for essential travel. While much of our leisure travel is on hold during COVID-19 as we all work together to limit interactions and flatten the curve, we know some of you need to travel for work, family, emergencies, and other reasons that can’t wait. We are here for you now and whenever you are ready to return.

Meet Natalie Gaston. She traveled through SEA in July with her husband Todd, and three children, Davis (9), Carter (7), and Katherine (4) as they moved their family from Quantico, Virginia to Okinawa, Japan for Todd’s next three-year stint in the Marine Corps.

Todd and Natalie were high school sweethearts who dated through college and got married during law school in 2006. Todd joined the Marine Corps in 2010, and they have moved seven times since then. Last fall, before COVID-19 was on anyone’s radar, they requested a move to Okinawa, for their next adventure.

“We wanted to try something completely new and adventurous while our kids were still young,” Natalie said. 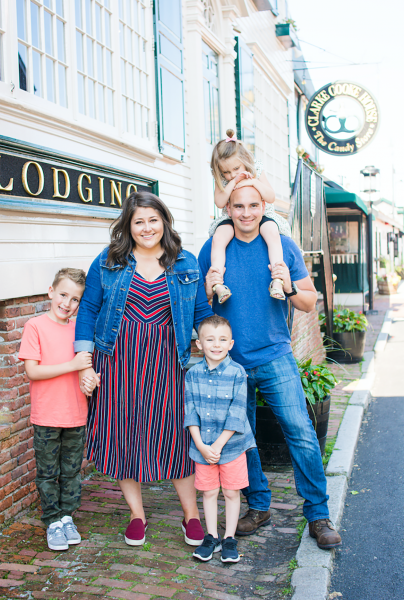 From March through mid-June 2020, the Gastons sheltered in place, like most of the country. Todd worked from home, their children’s schools went virtual, and Natalie only left the house once every other week to pick up groceries.

“We had a trip to Italy scheduled in April that was really disappointing to cancel, as well as a few planned beach trips with friends and family that we scrapped,” Natalie said. “We did not leave our home in Virginia until it was time for us to move to Japan.”

In June they traveled to Marietta, Georgia and Sarasota, Florida to say goodbye to family before the international move. In July, they flew from Tampa to SEA so they could catch their flight to Okinawa.

The Gastons landed at SEA on Tuesday, July 7, on an Alaska Airlines flight and flew out on Thursday, July 9 on the Patriot Express/Rotator, a government-chartered flight from Seattle to mainland Japan and then to Okinawa, Japan. 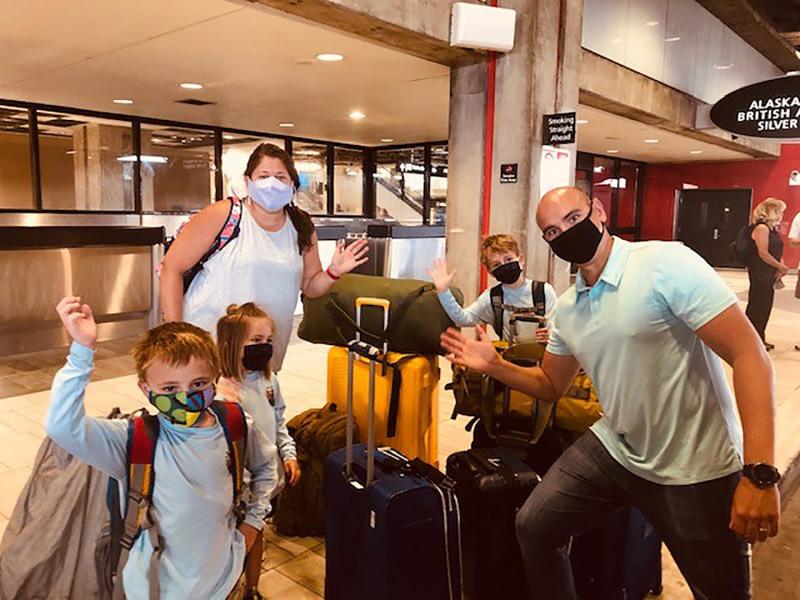 Natalie was nervous about travel after hearing stories about so many people who have suffered from the virus and so many unknowns.

“I don’t want to get it. I do not want to be the reason anyone else gets it. We had been isolated at home for so long that it felt weird to be out and about at all, let alone in an airport.”

After arriving at SEA, Natalie was relieved to see signage directing social distancing and alerting travelers of face covering requirements. It told her that that the airport was looking out for passenger and employee safety.

“SEA Airport had hand sanitizer everywhere,” she said. “Airline staff and Transportation Security Administration (TSA) were masked, patient, and professional. Seats in the concourses were marked off for social distancing.” 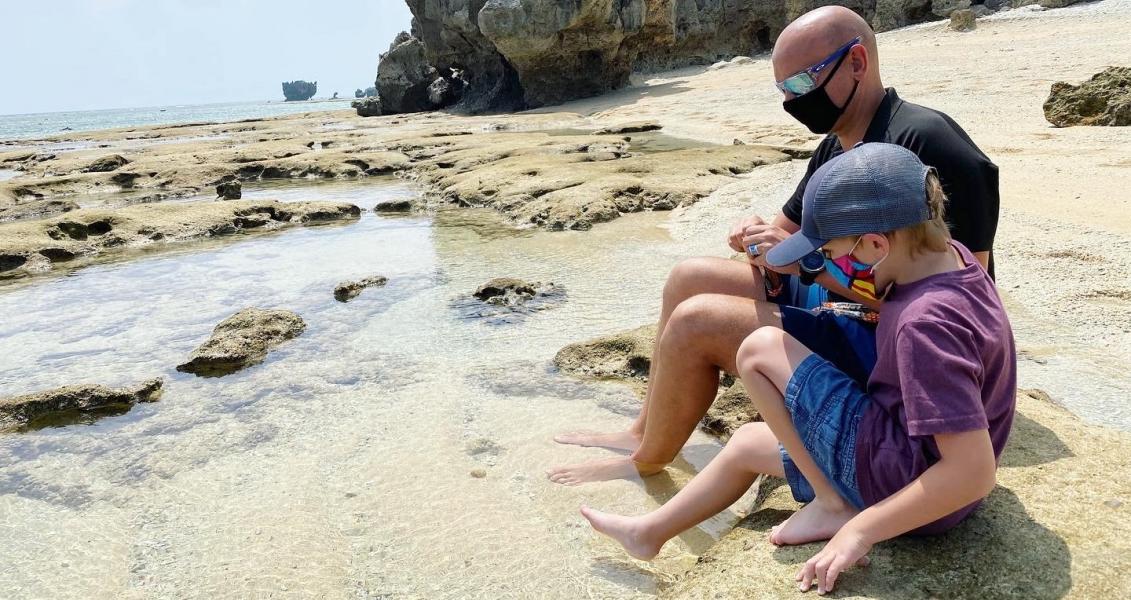 COVID-19 made an already frustrating process (preparing for an international move) a lot more complicated for the Gastons.

“Every step of the way, things changed half a dozen times and then changed back. Nothing went as planned. Every step, from obtaining No-Fee Passports to getting the immunizations to scheduling movers, was just more complicated because policies were changing daily on the military side of things and on the civilian side of things. It felt like a small miracle when we were finally on the tarmac getting ready to take off in Seattle,” Natalie said.

While they were preparing to move to Okinawa there were no known cases of COVID-19 on the island.

“It felt like this giant luxury of ‘normal’ life was awaiting us on the other side of the move. Since we have been released from ROM (Restriction of Movement — the 14 days you stay in isolation after arriving), that is no longer the case. Like in the U.S., it is unclear whether my kids will be going to school in person or continue distance learning. We have now been asked by the governor to stay home except for essential trips out. Beaches and hiking trails have closed. We had a few days to explore (socially distanced, mostly from the car) before the order came out. Okinawa is beautiful. I am really looking forward to eating in local restaurants and coffee shops, scuba-diving, and lots of sightseeing.” 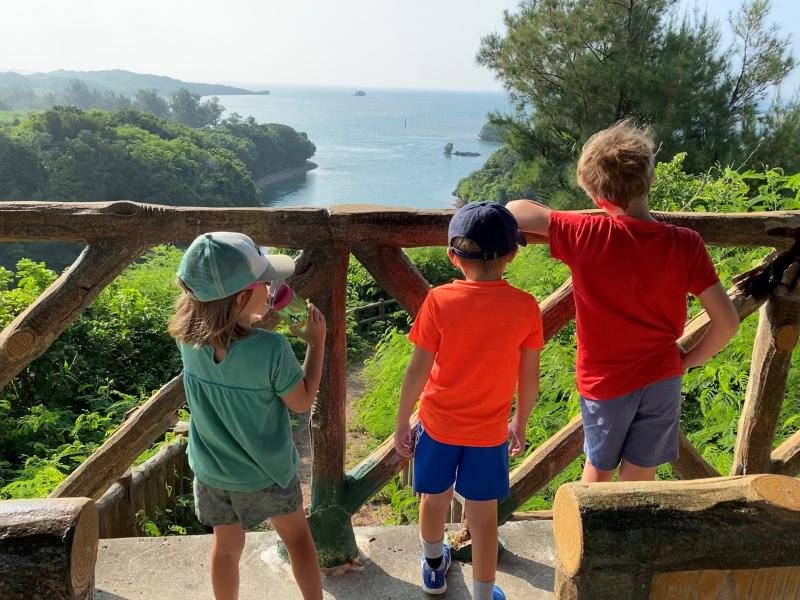 In pre-COVID times, the Gastons made a point to see friends and explore. They had planned to spend at least a week in Seattle before the flight to Okinawa, but that all got canceled. Their visits to Georgia and Florida to family were compressed and confined to their parents' homes.

“While we were traveling for the move, I was more anxious than I otherwise would have been. I worry for my family, but I cannot put out of my mind the impact our travel has on the employees surrounding us at hotels, airports, car rentals, all of it. Do they want to be there? Are they being taken care of? Am I making this worse for them? Is my business helping? I don’t know. It is just a lot.”

During their travel journey, they washed their hands a lot more, gave anyone around them as much space as possible, and wore masks anytime they were out of their hotel room, except when we were eating and drinking. They did not eat out at restaurants or visit museums. A lot of their go-to indoor sightseeing was off the table.

“Once things are back to ‘normal’, whatever that looks like, we have trips to Thailand, Vietnam, Cambodia, Bali, South Korea, and mainland Japan we want to get to in the next few years. Traveling around Southeast Asia was a huge incentive to move to Okinawa in the first place.”

Natalie is especially looking forward to exploring Okinawa and sending her kids back to school.

“There is so much to see and do on this island and I cannot wait to get to it.”

Learn more about the FlyHealthy@SEA health and safety program 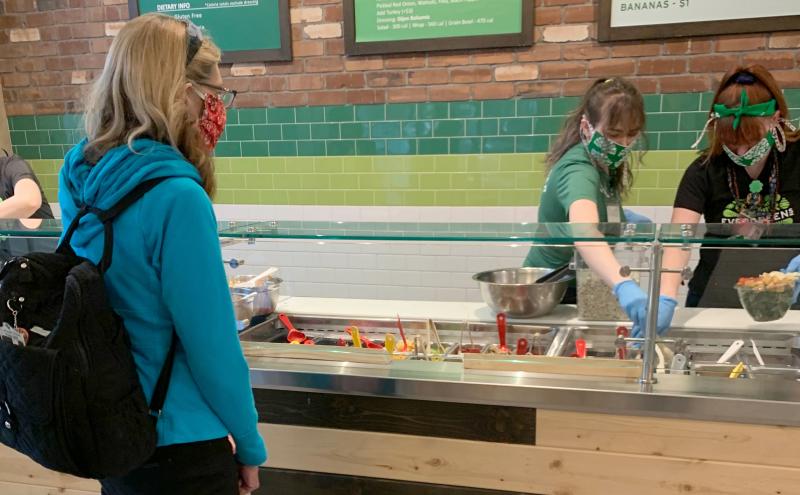 The COVID-19 global pandemic forced massive shifts in our lives from how we interact with friends to everyday errands like grocery shopping. We now expect different behavior from each other and new pr... 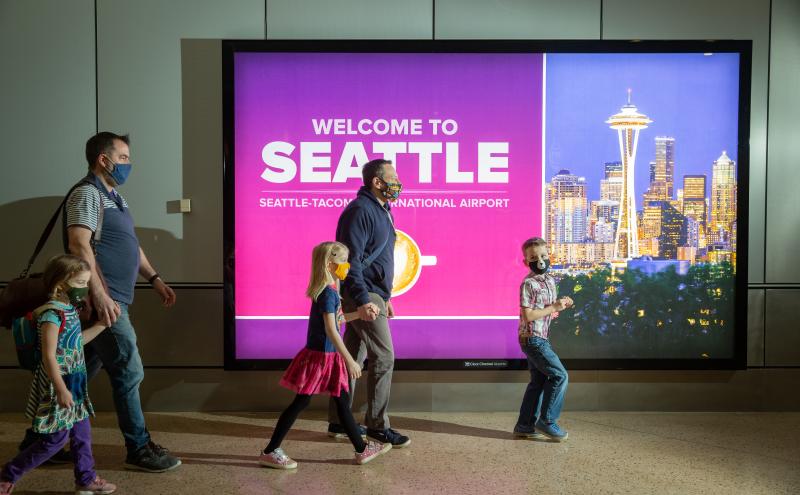 This blog post was updated on Feb. 4, 2021 COVID-19 Protocols for International Travel: A negative COVID-19 test is required for all international passengers coming into the U.S. with written d... 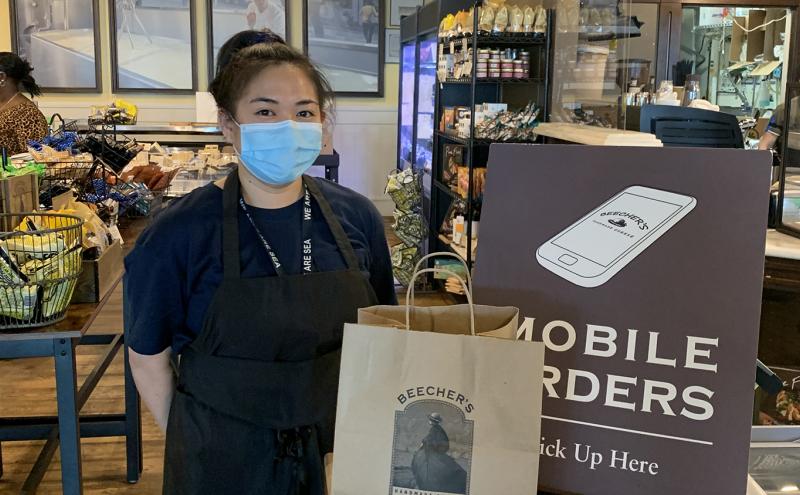 FlyHealthy@SEA Serves Up New Protocols with Airport Dining and Retail

Seattle-Tacoma International Airport (SEA) is preparing for the gradual reopening of the economy as outlined in Gov. Jay Insleeâs four-phase plan, Safe Start Washington. Dining and retail tenants at...

Pro Tips for Traveling to Mexico