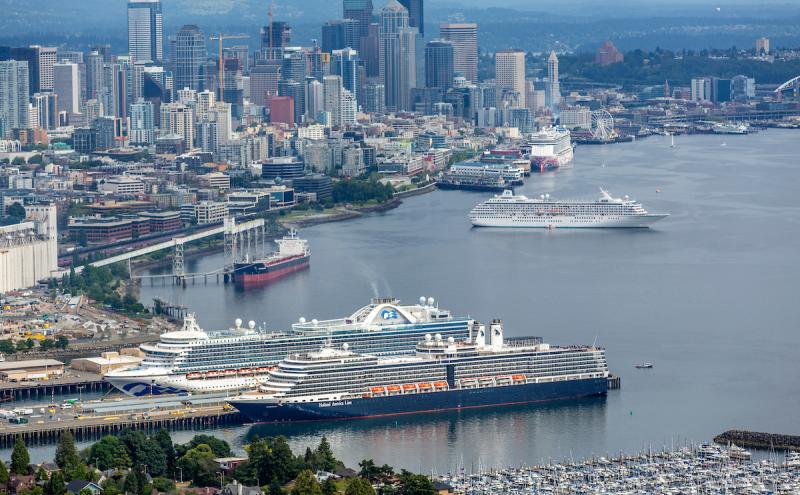 What is that white plume coming from the stack? It’s primarily steam.

Cruise ships are returning to Seattle this year with a longer and more active pre-season than normal. In a typical year, cruise ships only spend 8-10 hours at a Port of Seattle berth, during which they disembark passengers, load supplies, and embark new passengers before departing again for Alaska. It’s a quick and busy turnaround.

Instead of starting the cruise season with a typical quick and busy first ship call, Seattle’s home port cruise ships have come to the Port early, before any passengers arrive. Cruise ships sailed to Seattle early to coordinate the arrival and vaccinations of crew members, finalize the implementation of the many new safety enhancements, complete U.S. Coast Guard inspections, and begin loading supplies before the first passengers arrive later this month.

Normally, ships that are shore power capable connect when it’s available. A shore power connection allows ships to shut down their diesel engines, which are used to generate power for the whole ship, and instead, use Seattle’s clean electricity for their time at berth. The Port of Seattle was the first cruise home port in the world to offer two shore power-enabled berths (at Pier 91) and it’s widely used.

However, not all cruise ships are equipped to connect to shore power, and currently, the Port will not  have a shore power connection at its Pier 66 cruise terminal until the 2024* cruise season.  When there is no connection or ships cannot connect, they have to use fossil fuels to generate the electricity needed to power their onboard systems. This produces exhaust out of the ship’s stack.

While there is not currently a perfect alternative to eliminate fossil fuels for cruise ships or any other oceangoing vessel, the North American Emissions Control Area requires all ships to meet rigorous emission standards and limit the sulfur content in their exhaust. This is important for protecting local air quality.

Most systems work by mixing a seawater mist with the exhaust before it leaves the ship’s stack. The resulting chemical reaction removes the sulfur from the exhaust.  While the ship is still producing emissions from its diesel generators, steam is also produced when the seawater spray mixes with the hot exhaust. That’s why we see what looks like a plume of white smoke coming from the stack from some ships at berth. It is mostly steam.  It is important to note, the emissions we see from some cruise ships at berth are closely regulated.

Like many other transportation industries, the cruise industry still relies on fossil fuels. The Port of Seattle recognizes the importance of striking a balance between its mission to promote the significant economic opportunities and jobs for our region with our goal to be the greenest port in North America — which means also taking strong, equitable environmental action and being good stewards of our environment.

The Port has made firm commitments to take ambitious climate action and eliminate air pollution under the Northwest Ports Clean Air Strategy. We’re charting the course to be a zero-emission seaport by 2050 and to acting as quickly as possible to eliminate the use of fossil fuels along our waterfront — that’s why we are prioritizing shore power use across our cruise berths. In fact, our Maritime Climate and Air Action Plan — which is open for public comment this summer — sets a target by 2030 for 100% percent of the cruise ships that come to Seattle connect to shore power — for zero emissions at berth.

Also, earlier this year the Washington state legislature passed new laws that established a low carbon fuel standard for the state. Policies like this and ongoing investment in clean fuels, infrastructure spending to help transition industries away from fossil-fuels and onto cleaner equipment, capital investment, and regulations incentivizing change are critical to transitioning all transportation industries to an emissions-free future.

*This blog has been updated from the original 2023 project completion estimate.

Related to Questions about Cruise Ship Emissions at Berth 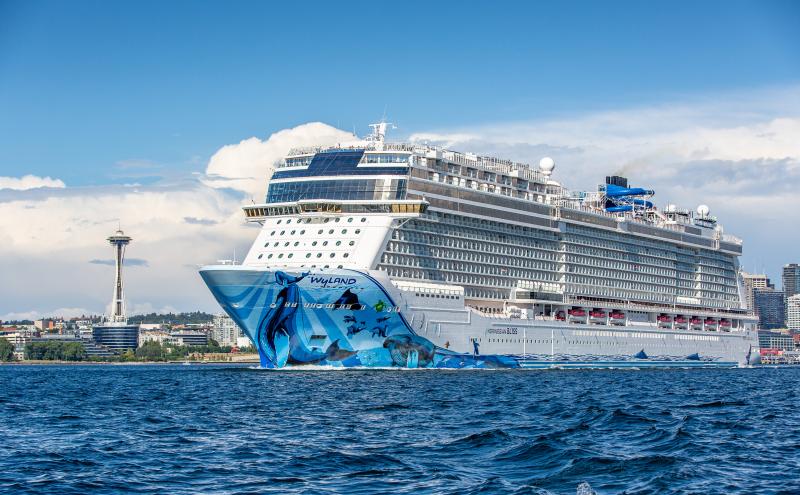 Welcome to the Cruise Port of Seattle! Located in the Pacific Northwest of the United States, with a backdrop of Washington state forests, mountains and sparkling Puget Sound, Seattle has been the ... 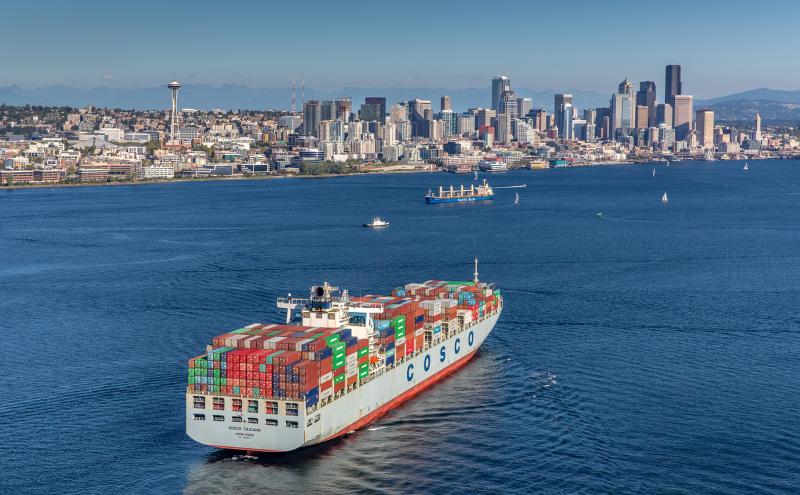 Neighbors, Community Invited to Comment on Plans to Phase out Maritime Emissions

In 2021, the Northwest Ports of Vancouver, BC, Seattle, Tacoma, and the combined container operations of The Northwest Seaport Alliance (NWSA), committed to an ambitious, comprehensive strategy to add... 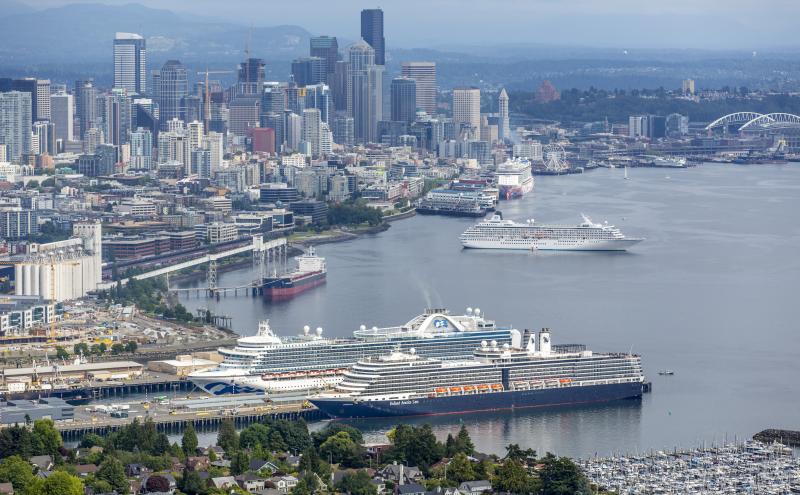 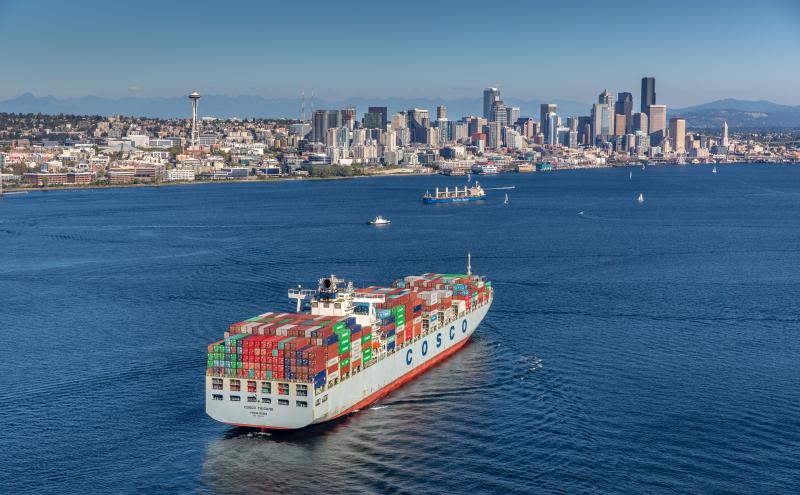 Thank you for sharing your feedback and expertise! The deadline to respond to the survey and/or submit comments was Sunday, August 15. Port of Seattle, Port of Tacoma, and the Northwest Seaport Allian...