We’ve all heard the fearful line about the future of work: the robots are going to take all of our jobs! But the Port of Seattle is finding that technology and innovation actually improve the human experience. It’s become routine to use a smart speaker or a robotic vacuum cleaner, and these technology assists can simplify your home life or give you back some time. In the same way, robots can help companies with jobs that are tedious or physically challenging and free up workers to do other things.

Dave Wilson, director of airport innovation at Sea-Tac Airport, says using automation and robotics at the airport is not only efficient, it’s expected by the community. “Our passengers are tech savvy and have an expectation that we will be early adopters of cutting-edge technology,” he says. “After all, our region is considered ‘Silicon Valley North’ for innovation.”

Last year, the airport found a perfect place for a robot to take over a repetitive but necessary task. During a study to figure out ways to speed up the security checkpoint process, one team found that standing in the security lines and encouraging passengers to remove items like belts and laptops early on before they arrived at the checkpoint helped the lines move more quickly. “They were able to measure improvement to the overall security checkpoint process,” says Wilson. “But after a couple of hours our team was pretty exhausted from nonstop talking with passengers.”

The team decided that a robot named Tracy would be the ticket. The robot-controlled sign spoke and provided advice on how to get through security quickly, by removing scarves, belts, and jackets in advance — and “she” did it in six languages and never got tired. Wilson says the experiment yielded a potential gain of 18 percent to 20 percent improvement to the overall security checkpoint process. Plus, he notes, “Tracy was quite a novelty and many passengers, especially children, took selfies with Tracy while waiting in line.” 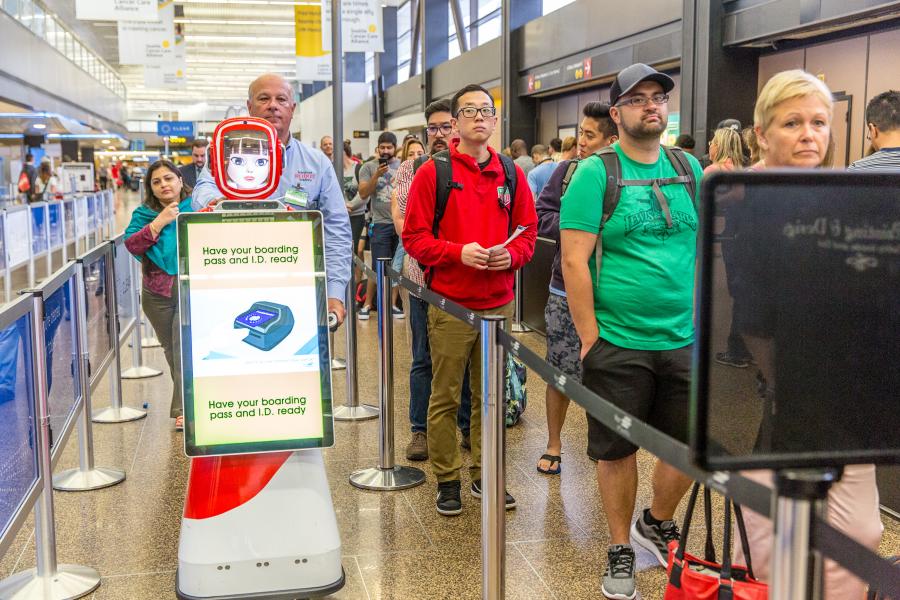 Tracy was just a pilot project, but she may be back soon. And if you’re walking through the airport today, you may just stumble across robots doing another job most humans find tedious: cleaning floors. One of Sea-Tac’s vendors, C&W Services, recently set a fleet of six self-driving floor-care machines in action at the airport. Brain Corp. provides the artificial intelligence software that manages and deploys the self-driving machine. The cleaning staff doesn’t need to directly operate the machines, so floor cleaning becomes autonomous. This allows the janitors to multitask and complete other work that requires a human touch while the floors get cleaned. 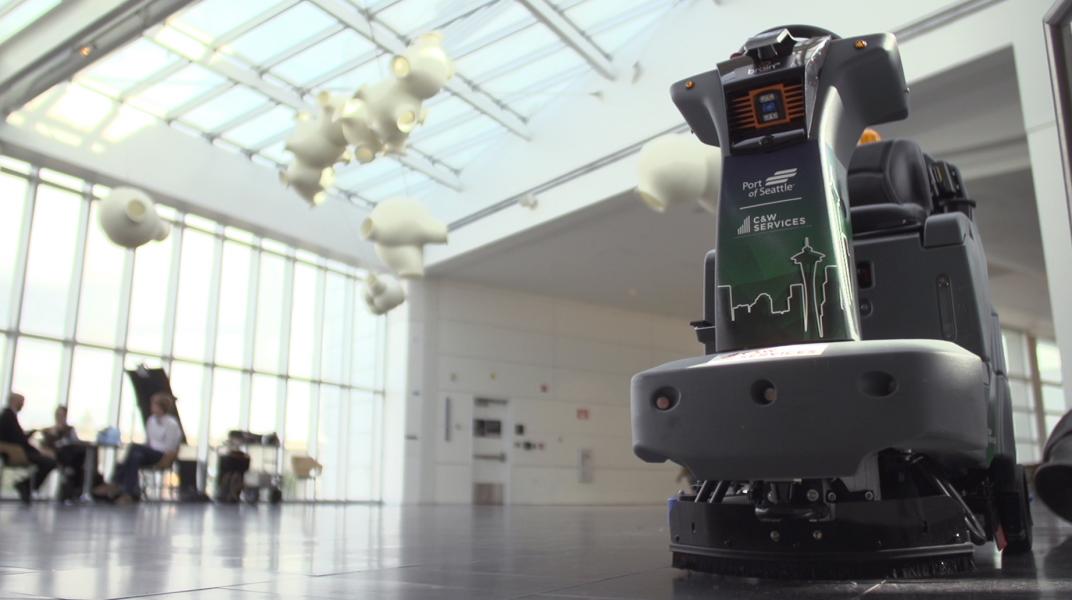 Robots also take on the dangerous jobs that humans don’t want without complaining. The Bomb Disposal Unit, a group of trained bomb technicians who protect Sea-Tac Airport, the seaport, and the surrounding Puget Sound communities, depends on a bomb disposal robot to keep them safe. The robot’s cameras, sensors and extending arms help the officers and technicians stay out of harm’s way while disabling and disposing of a potentially dangerous device.

Until people can fly, robots must take on jobs that humans simply can’t do. Take drones for example. AT&T uses drones to test for damage to cell towers and make sure wireless service is good. Construction companies are turning to drones more and more to provide digital maps and images of building sites, reducing the need for expensive and sometimes dangerous helicopter flyovers or humans scaling tall buildings to take measurements.

A pilot project led by the Port of Seattle uses aerial and underwater drones to survey the intertidal zone of Smith Cove on Elliott Bay. The project aims to assist with habitat restoration for salmon, capture carbon to slow the accumulation of greenhouse gases, and improve water quality. The drones create high resolution GIS maps and produce 3-D models of the underwater area — a job that would be nearly impossible for a person can be done quickly and efficiently with this technology.

Of course, the Port of Seattle doesn’t think robots are the answer to every working problem; we want to focus on innovations that make today’s workers more efficient and happy. Steve Metruck, the Port’s executive director, believes in creating a culture of innovation where ideas come from every level of the organization. That’s why he holds a quarterly innovation program to collect ideas from employees, some of which have already been put into place.

“Innovation is vital for us to succeed.  By listening to front-line employees and creating the atmosphere that encourages them to innovate on the job, I am confident we can come up with the best solutions in the shortest amount of time. This not only improves efficiency and effectiveness, it also increases employee engagement,” says Metruck.

Wilson, at Sea-Tac Airport, says that many of the new technologies and innovations are first evaluated on whether they will truly help improve customer experience or provide new capabilities. “Each proof of concept has a list of tests or demonstrations that are used to access the merits of the new technology,” he says. “Most have been successful and we’ve had some failures too. We learn from all of them.”