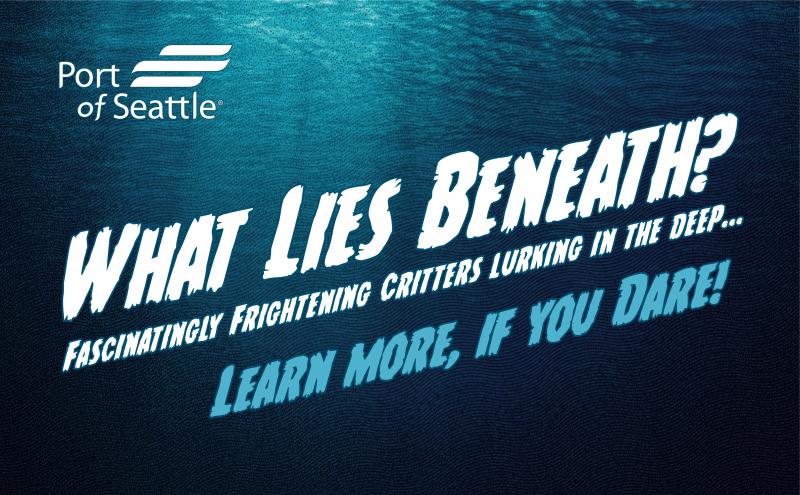 In the deep, dark, cold waters of Puget Sound lurk frightening creatures waiting to strike at hapless prey and pull them into a watery abyss. No, it‘s not the Seattle Kraken! Learn about the fascinatingly frightening creatures that lurk beneath the piers and docks of Elliott Bay. If you dare...

In the dark cold waters lurks a creature whose lineage is ancient, predating even the mighty T-Rex, King of the Dinosaurs. Slowly circling in the deep is a predator whose name invokes terror and keeps fish mooooving with fear, the mighty Cow Shark. Well, technically it’s the Bluntnose Sixgill Shark.

Most sharks have five gills while the bluntnose shark has six, hence its name. A member of the cowshark family, they cruise the ocean floor in search of prey including fish, seals, crabs, shrimps, and smaller sharks.

The Sixgill Shark is found all over the world including Puget Sound. They have been observed as deep as 6,000 feet but are commonly found around 300 feet. They are a rare sight in Puget Sound, so if you're diving and you see one, don’t feel scared ... feel lucky!

Giant Pacific Octopus: Tastes you with its arms!

Lying in wait in hidden cracks and crevices is one of the most intelligent animals in the ocean, waiting to strike at unwary prey. Darting out to envelope its prey with its eight powerful arms covered in over 2,000 articulated suckers, the kraken grips its hapless victim while using its powerful beak to crush, swallow, or pierce it.

This intelligent hunter is the Giant Pacific Octopus, the largest octopus in the world. The largest one ever recorded weighed 600 pounds and was 30 feet across, although most are only 16 feet across! They have special cells in their skin that give them the ability to change colors and texture to camouflage themselves against the rocks. Since they have no skeleton they can push their body into small nooks and crannies to hide or escape from predators.

The Giant Pacific Octopus is very intelligent, with the ability to use tools, solve puzzles and even open child-proof bottles. In captivity they even learn to recognize the individual humans they interact with.

Across Puget Sound you’ll find a family of fish that swims slowly through the water, but hosts two creepy secrets. The first is that even though it looks like a boring normal fish, it hides venomous spines in its dorsal fins. The second is these fish will probably outlive you. It’s a family of animals known as Rockfish.

There are over 100 species of rockfish around the world and 28  are found in Puget Sound.  Rockfish are in the Scorpaenidae family and like all members of that family they have venomous spines in their dorsal fins. Unlike their cousins, the stonefish, whose venom is deadly, the venom from rock fish isn’t harmful to humans but can cause a painful sting. Because rockfish venom causes pain and infection, they need to be handled with care.

Many of the species can live well over 100 years, distinguishing it as one of the fish with the longest lifespan. They don’t typically start breeding until later in their lives and this makes them susceptible to overfishing.

Creeping across the seafloor of Elliott Bay you’ll find a beautiful but deadly predator searching out unwary prey — the Sunflower Sea Star. Sunflowers are beautiful, and so is this multi-armed terror of the sea floor. The Sunflower Sea star may look and sound benign, but if you’re another sea star, clam, or abalone this creature is your worst nightmare. Once you’re in its grip the Sunflower Sea Star will push its stomach outside its body, envelope you, and begin to digest you.

The Sunflower Sea Stars have 16 to 24 arms and are fast and efficient hunters —they’re the cheetahs of the Echinoderm world moving at about one yard per minute on its 15,000 tube feet lining its arms.

Unfortunately the Sunflower Sea Star, like other sea stars in Puget Sound were victims of the mysterious  Sea Star Wasting Syndrome in 2013 and2014. The population of all sea stars crashed. The stars develop lesions, and their bodies fall apart and they die. Scientists aren’t sure exactly why this happened, but they suspect a viral infection and a possible link to the rise in ocean temperatures, but there is much more to learn. There are signs that the population is recovering, so some are cautiously optimistic about their future.

Peering out of a dark crack in the rocks lurks a strong-jawed predator waiting for a meal to swim by. This  fearsome denizen of the deep, the Wolf Eel, rushes out of its hiding place to crush and devour unsuspecting prey.

Though this creature may look fierce, it is actually a curious and surprisingly sweet and misunderstood animal. First it isn’t actually an eel (or a wolf either), but a type of fish. Second, these animals typically are monogamous and mate for life. They aren’t usually aggressive towards humans but their powerful jaws can give you a painful bite, so best to leave it alone.

These five critters, like all animals and habitats in the ocean, are under threat from climate change, ocean warming, and acidification. We all need to do our part to preserve and restore our ocean habitats. The Port is helping to trying to restore and improve the waters of Elliott Bay and beyond. Learn how we’re trying to help: