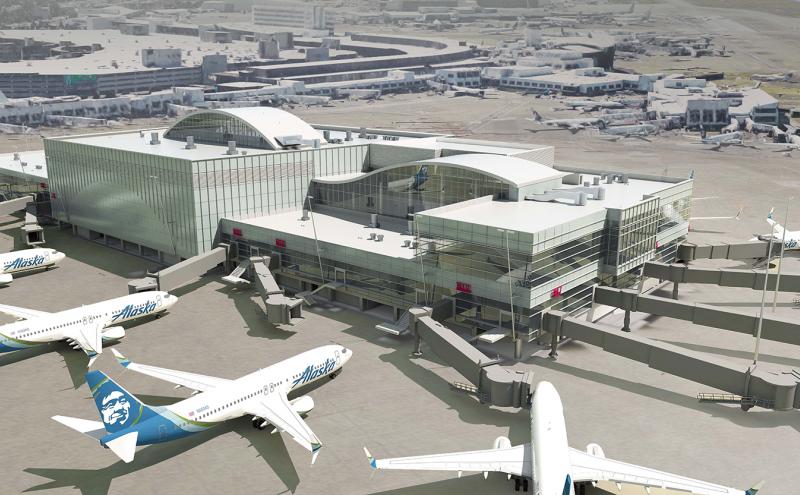 With the ceremonial pulldown of the last gate marker on the west wall, the Port of Seattle officially broke ground (or broke the wall) today on the North Satellite Modernization Project which will expand and renovate the 44-year-old facility to better serve passengers and respond to continuing growth at Seattle-Tacoma International Airport.  Washington Senator Maria Cantwell joined Port officials, Alaska Airlines and labor representatives to pull a rope bringing down the west end of the current facility where the expansion will take place.

The $550 million expansion and renovation of the north satellite will include adding eight new gates with a 240-foot extension of the building to the west, add an upper level mezzanine, more than double the existing dining and retail square footage, and introduce a rooftop Alaska Airlines lounge with views of the Olympic Mountains. The phase one expansion is scheduled to be open in 2019 followed by the renovation of the current facility to be open in 2021.

“Passenger needs are changing — back in 1973, when this building was built, no one needed speedy Wi-Fi or power outlets to charge their mobile devices,” said Port of Seattle Commissioner Bowman. “This project represents benefits not just for travelers, but also for the broader community, including more jobs in construction and airport industries, future opportunities for entrepreneurs in dining and retail businesses, sophisticated building plans to lessen our environmental impact and an artistic vision that our community can be proud of.”

Click here to view a short video of today's event.

The Port announced last week, that Sea-Tac jumped up to the ninth busiest airport in the U.S. with a sixth straight year of record-breaking passenger traffic in 2016. The eight percent increase, to 45.7 million passengers, pushed Sea-Tac up from its previous ranking of 13th, moving past Houston, Phoenix, Miami and Charlotte. The current average of 125,000 passengers per day would make Sea-Tac Washington’s fifth largest city or equal two sold out CenturyLink Fields.

“Today’s groundbreaking underscores the significant economic opportunities Sea-Tac Airport provides to our region and our state,” said Senator Cantwell. “Improving our airports is important not only for travel efficiency and safety, but also for attracting more businesses and investment to the region.”

The North Satellite Modernization is an unprecedented working arrangement between the Port and Alaska Airlines, Sea-Tac’s largest airline and the sole tenant of the North Satellite. Alaska is working with the Port with the goal of improving the flying experience from airport drop-off to departure. Related projects in the Modernization program already completed are refurbished satellite baggage systems servicing the north satellite and new Concourse C exterior walkways for a package of work totaling $606 million. Alaska is set to spend $41 million on the interior of the lounge, additional workspace and other various improvements. Additional enhancements by Alaska Airlines include the roll-out of the new look and branding in the ticketing and gate areas and a newly painted maintenance hangar.

“As Seattle’s hometown airline, Alaska is committed to continue to grow and invest at Sea-Tac.  Our investment in the North Satellite is one of the largest we have made in decades and sets the stage for more to come,” said Andrew Harrison, executive vice president and chief commercial officer at Alaska Airlines. “The North Satellite will embody our Northwest roots while providing modern amenities to make the travel experience exceptional for our guests. In addition to the 15,000 square foot rooftop lounge on the North Satellite, we will also be opening a third lounge on Concourse C in May.”

North Satellite Modernization is projected to create more than 5,100 jobs during the construction. In addition, the doubling of Airport Dining and Retail space will provide more business and job opportunities. Overall, Sea-Tac Airport supports more than 109,000 direct jobs, including 18,500 people working at the airport, and tens of thousands more in airline services, freight transportation, construction or tourism.

“This investment will result in the creation of a lot of good, family-wage jobs for the skilled craftspeople who are our members,” said Monty Anderson, Executive Secretary of Seattle Building & Construction Trades Council. “These are the kind of jobs that bring strength and diversity to the local economy – and have been the foundation for our community for years.”

The design for the North Satellite takes references from the existing airport’s architectural vocabulary of materials, colors, and articulated roof forms and creates a strong new addition to the overall airport. Inspired by Washington’s natural environment of native rivers and water, the articulated roof form becomes the signature visual element while functionally bringing daylight to the central circulation spine within. The interior will feature wide, daylit concourses constructed of materials, colors, and finishes inspired by the Pacific Northwest environment. The project is seeking LEED (Leadership in Energy & Environmental Design) certification.

The expansion and renovation of the North Satellite will improve operational efficiency, and enhance the travel experience with more concessions, seating areas, power outlets and other amenities. Alaska Airlines will maintain Horizon Air regional flights out of Concourse C, which provides fast, easy, and direct connection to the North Satellite through the satellite train system. Operations at the North Satellite will continue throughout the construction process. The first phase will build out the extension to the west of the current building. Once that is complete in 2019, the second phase will renovate and upgrade the eastern portion of the building.

To view fly-through videos and images, and get more information on the details of the project, visit our North Satellite Modernization project page.

Including the North Satellite Modernization project, the Port of Seattle is working on more than $2 billion in near-term projects planned to accommodate growth for the future including a new International Arrivals Facility, updated baggage system, and a 20-year Sustainable Airport Master Plan.