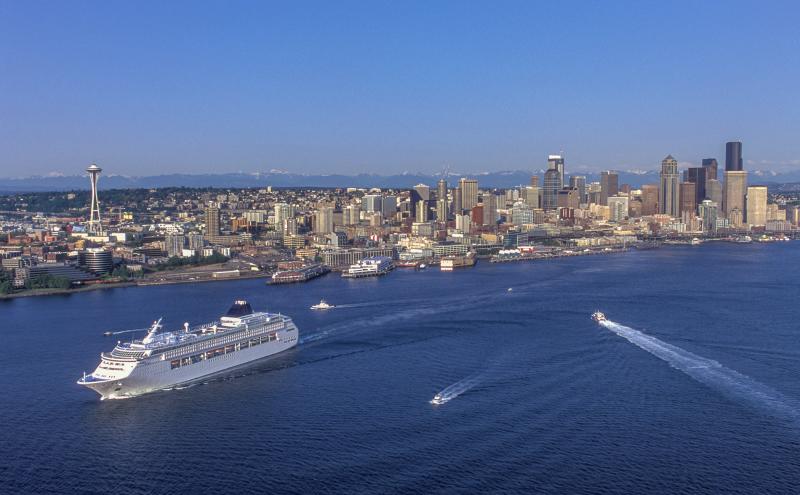 As hubs of transportation activity, ports move people and goods using vehicles, vessels, equipment, buildings, and facilities that are mostly powered by fossil fuels. These energy-intensive operations contribute to air pollutant and GHG emissions in the region. Port of Seattle is part of a region-wide inventory to measure and track maritime-related air pollutant and GHG emissions. The Puget Sound Maritime Air Emissions Inventory is conducted every five years by the Puget Sound Maritime Air Forum, a voluntary association of private and public maritime organizations, ports, air agencies, environmental and public health advocacy groups and other parties with operational or regulatory responsibilities related to the maritime industry.

The Puget Sound Maritime Air Emissions Inventory (PSEI) covers air pollutant and greenhouse gas (GHG) emissions from all maritime-related activities in the U.S. portion of Puget Sound. Information about levels of air pollutants and GHG emissions is summarized for each inventory year for the Puget Sound region, by county, and by participating port. Emissions are modeled based on vessel or equipment details, like engine size and fuel type, operational profiles, and activity data for each sector.

The PSEI is conducted only every five years and involves collecting data from ports, port tenants, customers, and industries within the maritime supply chain. Inventory data is available for 2005, the baseline year, 2011; and, most recently, 2016. The next PSEI will cover emissions for 2021.

The Port of Seattle’s lines of business include the cruise, grain, commercial fishing, recreational boating, and other maritime industries. In addition, the Port of Seattle is a partner in The Northwest Seaport Alliance (NWSA) a separate port development authority that operates container cargo terminals in Elliott Bay. NWSA North Harbor emission sources include container ships, cargo-handling equipment used on container terminals, container trucks, and locomotives. Looking at both Port of Seattle and NWSA North Harbor gives a more complete picture of maritime emissions from Seattle-based ports.

What does "local sources of DPM" mean? DPM emissions can travel long distances, but concentrations are highest closest to the source; therefore, emissions occurring on or near port terminals are the most critical to address to protect the health of near-port communities. This statistics looks at DPM from sources of emissions closest to populations, such as ocean-going vessel hoteling/maneuvering (vessel activity occurring near or at berth) but excludes ocean-going vessel transiting to/from ports. Local DPM trends also include regional (airshed-wide) emissions of locomotives and container trucks traveling throughout the greater Puget Sound area.

The Port of Seattle’s emissions data from the Puget Sound Maritime Air Emissions Inventory does not include emissions associated with Seattle-Tacoma International Airport (SEA Airport). However, Port of Seattle conducts annual GHG emissions inventories for maritime operations and the SEA Airport. Find more information on how the Port measures GHG emissions here.

How is Port of Seattle Reducing Maritime Emissions?

Results from the 2016 PSEI help guide and focus the Port’s emissions reduction efforts. Much of the progress ports and industry have made reducing emissions can be attributed to changes in regulations, industry action, and port policies and programs to accelerate the turnover of older equipment and use cleaner fuels. Since 2008, the Port has collaborated with Port of Tacoma, Northwest Seaport Alliance, and Vancouver Fraser Port Authority in British Columbia on the Northwest Ports Clean Air Strategy, a joint effort to reduce maritime-related air and GHG emissions in the ports' shared airshed. The four ports announced a renewed 2020 Northwest Ports Clean Air Strategy that sets a bold new vision to phase out seaport related emissions by 2050.

This interactive data dashboard is a new tool to explore emissions data from the Puget Sound Maritime Air Emissions Inventory. It summarizes and visualizes airshed-level data for DPM and GHG emissions from Port of Seattle maritime operations and the marine container cargo operations of the Northwest Seaport Alliance in Seattle. Click through the tabs to explore the different visualizations available. Use the filters to look at data for specific maritime activities or filter to focus on a specific port organization. Please email cleanair@portseattle.org with any questions or to provide feedback on the tool.

More detail on trends for other air pollutants and other ports is available in the full 2016 PSEI report.