Please note: If you plan to visit maritime parks and marinas during the COVID-19 pandemic, please read the Safe and Healthy On Shore and Off blog for guidance.

The Duwamish River is one of the most industrialized rivers, but it is the site of transformative community activism and public sector leadership. To recognize the stewardship of the community in restoring the Duwamish River, the Port and Seattle Parks Foundation worked with community members to rename six Port-owned parks and shoreline access sites along the Duwamish River to new names that reflect the cultural and environmental history of the area.

After many months of public and community input and scoring on park name nominations, and over 3,000 name entries, the final park names were announced on October 27, 2020. For more information, visit NameIncredibleParks.org and watch this video about the Incredible Parks naming campaign.

It was a courageous band of populists in the early 1900s who realized that Seattle’s natural deep-water port was an asset and resource that should belong to the people. Today, its scope is unique, from its vital cargo and passenger seaport and airport to the home for the North Pacific fishing fleet, to first-class public marinas and conference facilities, to a necklace of gem-like parks around Elliot Bay. The Port of Seattle has more than 60 acres of parks and public access sites that include scenic bike and pedestrian trails, picnic areas, habitat restoration areas, fishing piers, and shoreline access. Download the Habitat Restoration and Parks and Public Shoreline Access Sites. You may also check out the Port of Seattle Waterfront Walking Tour map.

Several Port of Seattle parks have been featured in The Seattle Times as great places to enjoy the outdoors while watching ship movements and other maritime related activities.

Our Marine Maintenance Department uses 100% organic landscaping techniques and plants only native non-invasive species and drought tolerant trees and shrubs. All grass clippings and trimmed branches are composted or mulched for future use. This helps to conserve water and reduce run-off. Several parks have received environmental awards for recycling, water conservation, and hazardous waste reduction.

Tucked among the seaport's terminals are public facilities such as fishing piers, bike paths, an exercise course, wildlife habitat preservation, a boat launch, and numerous benches and paths along the shoreline.

For general park information, please email us at parks@portseattle.org.

For information on specific parks, browse the Places section, and select Waterfront Park. 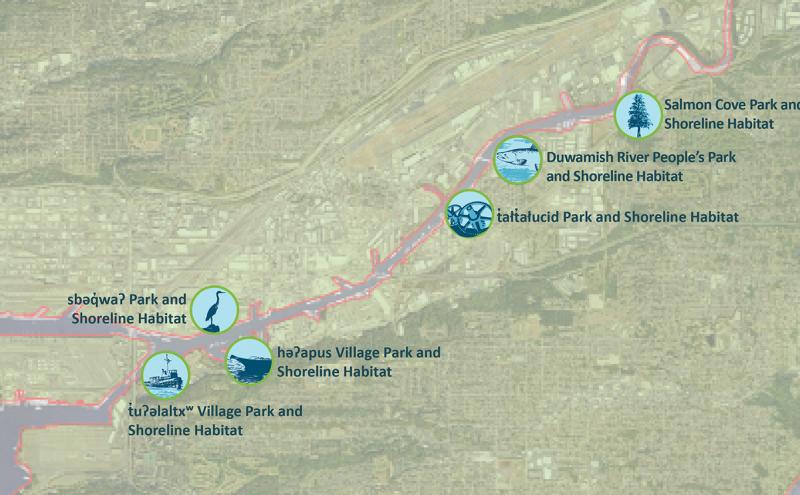 The Port of Seattle Commission voted to adopt new, community-sourced names for six Port-owned parks and shoreline habitat areas along the Duwamish River. The names reflect the cultural, historical and...