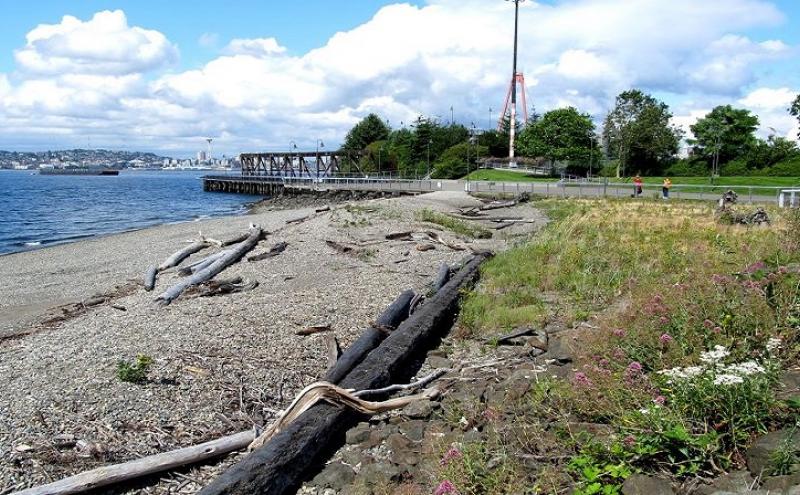 Jack Block Park is a 15-acre park in the West Seattle neighborhood. Situated on the northwest corner of the Port of Seattle's Terminal 5.

The site of the park was previously occupied by a wood treatment plant and a shipbuilding facility. The area was eventually contaminated with creosote and designated a Superfund site by the U.S. Environmental Protection Agency in 1994. Originally named Terminal 5 Park, the park opened in 1998 as part of the Port of Seattle's redevelopment of Terminal 5 and was dedicated and named after former Port Commissioner Jack Block in 2001.

After an environmental cleanup effort that included the removal of contaminated mud and wood pilings as well as the capping of 58 acres (23 ha) of sediment, the park's beach opened to the public in 2011.

The park features a walking path along the shoreline, which passes by a play area and a walkable pier before terminating at the park's observation tower. The tower overlooks Elliott Bay and downtown Seattle and offers a view of port operations at Terminal 5 and Vigor Shipyards. Interpretive plaques at the tower provide a summary of activities at the Port of Seattle and an overview of maritime shipping technology.

In 2017 the Port performed a structural inspection of the existing timber pier at the Park and identified areas of degradation requiring immediate repair. New deficiencies found in the most recent inspection in 2020, has led to closing the pier to the public, out of an abundance of caution.

The Port’s goal is to address the present conditions of the pier, preserve public shoreline access and the open space public-use areas it provides; while balancing environmental, financial, and community stewardship goals of the Port of Seattle.

The Port of Seattle is considering several potential park improvement alternatives to address the pier’s closure including its replacement, or shoreline, and/or interior enhancements.  Participation in the Jack Block Park survey will help inform the Port as to what current and potential park features are most important to users of the park.

Following survey analysis, the Port will host a virtual Open House outlining survey results and the proposed modifications for the Park.