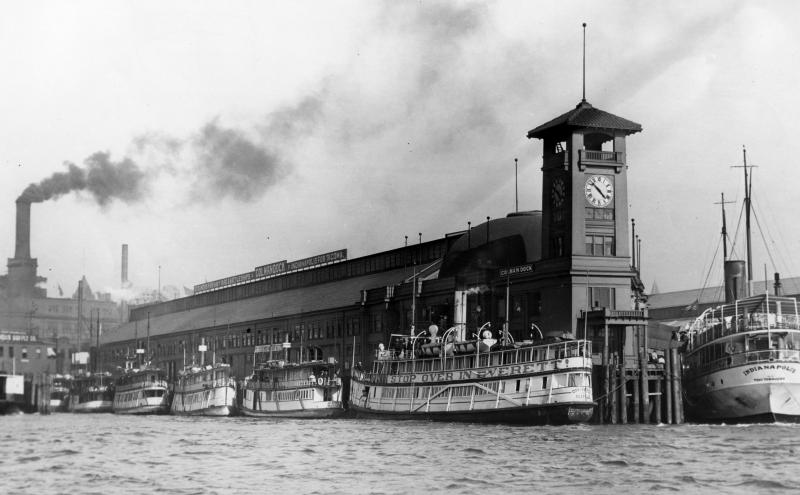 For those of us who work at the Port, were elected to serve as Commissioners, or even those of you who are reading this blog, have a pretty good understanding of the wide range of things the Port does. However, that is not the case with the general public.

So I spent some time digging through various Port documents that have made a variety of attempts to succinctly describe the Port. Words matter and when it comes to the words the Port has used for our mission statement, those words have changed. Over the years we tried out various statements on letterhead, promotional materials, and formal documents saying what we do, but perhaps the closest thing the Port has to an official mission statement is found Article 1 of our Commission bylaws.

September 5th marked the Port's 108th anniversary of our founding and anniversaries are a good time to look to the past and plan for the future. The historian and author Walt Crowley described the formation of the Port of Seattle as the high-water mark of the Progressive era.

In 1911 the Port of Seattle was founded by citizen initiative to rein in the influence of the railroads which dominated access and use of the waterfront. It became the nation’s first autonomous municipal entity to engage in Port operations and commerce development. This history makes it clearly the people’s Port — elevating the need for it to conduct itself transparently and accountably especially with the public and local and tribal governments.

The incredible diversity of the Port’s lines of business, community, and environmental engagements, pose a real challenge to be succinct. Previous attempts have been multiple sentences long or a sentence followed by bullets and they all had different areas of emphasis.

The Port is a body that continues to be shaped by its constituents. Recently people concerned about airport noise brought to our attention that when we changed our bylaws to clarify the succession of officers, we deleted the words, “quality of life.” As a Port that represents all of King County we must consider the perspectives of all our constituents. This requires balancing the needs of communities that benefit from our work and those impacted by our work and the bylaws intend to reflect that.

After much review of history and engagement with my colleagues on the Commission we landed on the following mission statement that I believe does an excellent job of encapsulating the Port’s broad mandate in a single sentence.

The Commission passed a resolution at its meeting on September 10th changing the mission statement in the by-laws to read:

Founded in 1911 by a vote of the people as a special purpose government, the Port of Seattle’s mission is to promote economic opportunities and quality of life in the region by advancing trade, travel, commerce, and job creation in an equitable, accountable, and environmentally responsible manner.

I hope all who read this get a sense that this is their Port and we are committed to further its broad mandate on behalf of the greatest public good.

Top Photo: Vessels of the Mosquito Fleet, primary conveyances for travel throughout the Puget Sound Region in the 1180-1890s, take every foot of space at Colman Dock, Seattle, ca 1909.

Thanks to our Public Servants