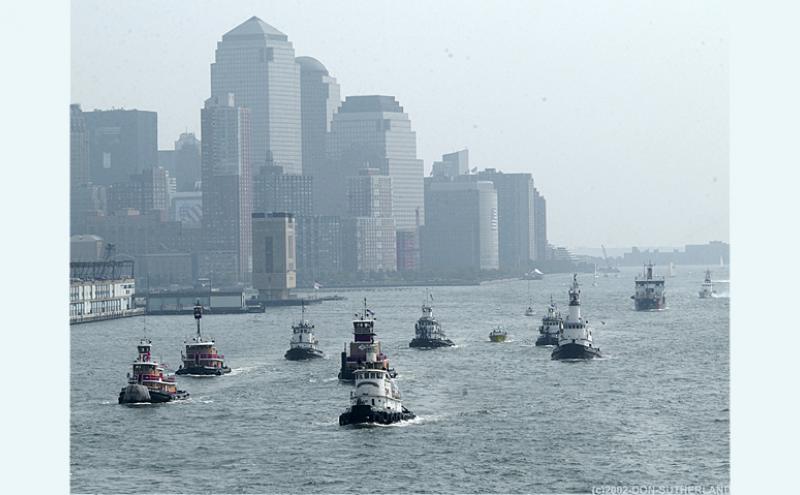 By Fred Felleman and Charlie Costanzo

Twenty years ago on September 11, horrors that none of us could have ever imagined unfolded in New York City, Washington, D.C., and Shanksville, Pennsylvania, While the public was trying to flee the devastation, first responders and those with a mission to serve, selflessly headed into harm’s way to save every possible life. This year the Port of Seattle remembers 9/11 by dedicating an airport stairwell, used by first responders as a training location, as a formal memorial to those lives lost twenty years ago.

We also are honoring the heroic mariners whose less well-known actions led to the safe evacuation of 500,000 people in the immediate aftermath of the attacks.

On that day in New York Harbor, dozens of American vessel operators spontaneously responded to the 9/11 attacks.  As Ted Tregurtha, President of Moran Towing in New York, explained, commercial vessels were already on the scene or headed to lower Manhattan when they received a call from the United States Coast Guard to assist in the evacuation. “Mariners from every company and every type of vessel responded similarly and in the best tradition of the sea.” We honor the many individual mariners who independently stepped up to help others in a time of need.

Maritime leaders plan several events in the next days to remember the service of those who led the evacuation and rescue effort and honor the lives lost that day.

In addition, the American Waterways Operators (AWO), the national trade organization for tugboat, towboat, and barge operators, plans activities to commemorate the 20th anniversary of 9/11, remember the lives lost, and recognize the extraordinary individuals who led the evacuation. Earlier this week AWO released an excerpt of a podcast interview with Admiral James Loy, Retired Commandant of the United States Coast Guard during 9/11. You can find information on more remembrances on the AWO Twitter site.

The domestic maritime industry owes its existence in large part to the Merchant Marine Act of 1920 or the “Jones Act”, a law sponsored by Washington Senator Wesley Jones that ensures United States-based companies own, build, operate, and crew its own commercial fleet. The Jones Act provides stability to the U.S. maritime industry and helps to sustain 650,000 American jobs, resulting in $150 billion in economic benefits each year. In addition to ensuring we have home-grown maritime capacity to strengthen our ports’ resiliency in times of natural or man-made crisis, it also provides mariners to enable military sealift capability when called upon in times of war.

In the Pacific Northwest, we’re fortunate to have multiple Jones Act carriers with the capability to provide such services in our region and overseas. In fact, major sealift responses have been conducted from Puget Sound ports going back to the 9.2 magnitude earthquake in Alaska in 1964. The emergency response to the quake made Terminal 5 in Seattle the southern locus of the relief effort and heralded the first handling of containerized cargo at Terminal 5. Sea Land Services and its containerized supply chain carried the massive response of relief and rebuilding supplies. By the early 1970s, container shipping became the norm for international maritime trade.

Our maritime terminals continue to be available for emergency response. Local military bases routinely use our terminals to deploy equipment around the world, and during the early days of the COVID-19 pandemic we made Seattle’s Terminal 46 available for trailers, container equipment, and storage needs in support of the U.S. Army's Field Hospital 10.

In addition to the heroism displayed by our fire and police emergency responders on 9/11 and in its aftermath, the maritime industry’s response is also something we should all be proud of. While we hope to never be needed to do so, mariners are ready to serve our region in any crisis as they serve our economy every day.

Representatives from the Port of Seattle’s first responders will be on site for the 20th anniversary to stand in solidarity with their counterparts in New York, for whom they provided mutual aid on that tragic day. We extend our deepest appreciation to all the unsung heroes who have and continue to serve the public.

Sign up to receive email updates from Commissioner Felleman

Learn more about the 9-11 boat lift or participate in tributes.

Learn about maritime resiliency response planning in our region