Construction Gets Under Way On Des Moines Creek Business Park 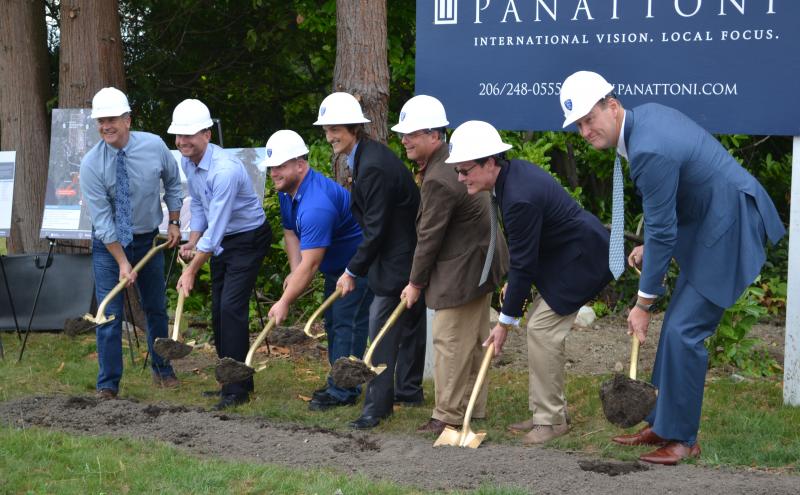 Port of Seattle and City of Des Moines officials joined with Panattoni Development Company today in breaking ground for the 35-acre phase 1 of the Des Moines Creek Business Park, which is expected to provide 139 construction jobs, 600 permanent jobs, and yield community-wide economic benefit. The target for completion of the first phase is 2015.

Earlier this year, the Port of Seattle Commission gave final approval to a long term ground lease with Panattoni for developing the 87-acre business park, on port property located south of Seattle-Tacoma International Airport. It will include up to two million square feet of development with a combination of airport-related commercial and light industrial uses.

Today’s ceremony also celebrated Des Moines’ 24th Avenue South and South 216th Street improvements as part of the new “Transportation Gateway,” which - in combination with similar improvements in the City of SeaTac - will provide a direct freight corridor between the business park and the airport. The port provided $6 million towards this effort and advocated at the state level for additional funding to complete this new gateway.

“At full build out of this site, it is expected to create 1,600 jobs for south King County residents – that’s a dramatic impact for families,” said Port of Seattle Commissioner Tom Albro. “This is a prime example of how the port can stimulate economic growth through cooperative development in our region, one of our key goals in our Century Agenda. The tenants here will support the area as a premier international logistics hub which in turn will increase air cargo and drive job growth."

The estimated $100-to-125 million business park project will be built in several phases over seven years. It will include flexible-use, manufacturing, office, distribution and industrial business park buildings to accommodate tenants including freight, aviation manufacturers and air cargo company offices that will benefit from the close proximity to the airport. The full build-out of the project is expected to create 350 construction jobs and an estimated 1,600 permanent jobs in southwest King County, and $6.1 million in annual state and local tax revenue.

“There are going to be hundreds of good paying jobs that will come out of this, and it will be good for the existing businesses and future businesses of Des Moines,” said Des Moines Mayor Dave Kaplan.

“This is the right project at the right time for both the City of Des Moines and the Port of Seattle - we’re excited to get underway,” said Bart Brynstad, partner at Panatonni Development Company. “Momentum is solid right now and we’re confident in the long-term viability of this location for future tenants.”

About the City of Des Moines

The City of Des Moines is a waterfront community located midway between Seattle and Tacoma in Washington State. Des Moines has numerous beaches and public parks on Puget Sound. Offering housing opportunities for every income level, the city is continually seeking new business and development opportunities to provide family wage jobs. The city’s marina is right next door to its small-town shopping district. Fishing piers, historic waterfront park and boardwalks are premiere places to stroll as the sun sets behind the Olympic Mountains. The residential population of Des Moines is30,000. Des Moines is also home to Highline College and several retirement homes.

Founded in 1986, Panattoni Development Company, Inc. is one of the largest commercial real estate development companies in the world having developed 175 million square feet of space globally. The Newport Beach-based company currently operates 28 offices in the United States, Canada, and Europe and has extensive experience in the development of in¬dustrial, office, retail, and mixed-use projects.

In Seattle, Panattoni has completed 64 buildings totaling 7.2 million square feet since 2003 and currently has over 1 million square feet in the pipeline. The Des Moines Creek project is marketed by Kidder Mathews of Seattle, represented by Chris Corr, Thad Mallory and Travis Stanaway.