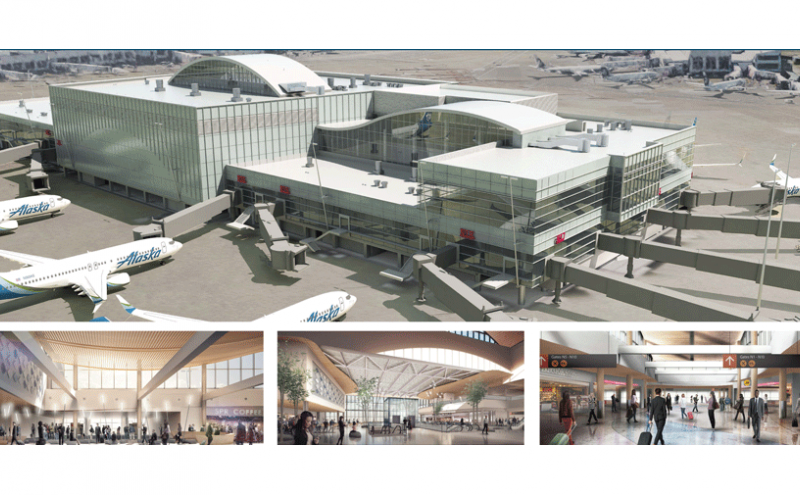 SEATTLE – The Port of Seattle today unveiled the first fly-through videos and the final design images for the modernization of the North Satellite, dubbed NorthSTAR (North Sea-Tac Airport Renovation) at Seattle-Tacoma International Airport. The images reveal the dramatic changes coming to the 40-year-old facility to better serve passengers and respond to the continuing growth at Sea-Tac. The NorthSTAR project’s groundbreaking is scheduled for the first quarter of 2017 with phase one complete in 2019 and the full facility upgrade opening in 2021.

The $636 million project will include adding eight new gates with a 240-foot extension of the building to the west, add an upper level mezzanine, more than double the existing dining and retail square footage, and introduce a rooftop Alaska Airlines lounge with views of the Olympic Mountains.

“This project - which will include new gates, increased dining and retail options, and more robust Wi-Fi and connectivity – is critical for meeting the region’s needs at Sea-Tac Airport for the next 25 years,” said Port of Seattle Commission President John Creighton. “Renovations will open up the building with natural light, bring the feeling of movement and travel inside and express the culture of the Pacific Northwest with cost efficient, environmentally friendly functions and materials including a living wall and collecting rainwater to supply flushing water to the restrooms throughout most of the year.”

NorthSTAR is an unprecedented working arrangement between the Port and Alaska Airlines, Sea-Tac’s largest airline and the sole tenant of the North Satellite. Alaska is working with the Port with the goal of improving the flying experience from airport drop-off to departure. Related projects in the construction include main terminal improvements, refurbished satellite baggage systems, and already completed exterior walkways on Concourse C.

“With upgraded facilities and additional gates, the improvements to the North Satellite will enhance the travel experience for our customers and employees and accommodate the continued growth of the airline,” said Andrew Harrison, executive vice president and chief commercial officer at Alaska Airlines. “Through the partnership with the Port of Seattle on the North Satellite Expansion Project, we will be able to deliver a signature Alaska experience for fliers in a space that epitomizes our energetic brand.”

The design for NorthSTAR takes references from the existing airport’s architectural vocabulary of materials, colors and articulated roof forms and creates a strong new addition to the overall airport. Inspired by Washington’s natural environment of native rivers and water, the articulated roof form becomes the signature visual element while functionally bringing daylight to the central circulation spine within. The interior will feature wide, day lit concourses constructed of materials, colors and finishes inspired by the Pacific North West environment. The project is seeking LEED (Leadership in Energy & Environmental Design) certification.

The expansion and renovation of the North Satellite will improve operational efficiency, and enhance the travel experience with more concessions, seating areas, power outlets and other amenities. Alaska Airlines will maintain Horizon Air regional flights out of Concourse C, which provides fast, easy and direct connection to the North Satellite through the satellite train system. Operations at the North Satellite will continue throughout the construction process. The first phase will build out the extension to the west of the current building. Once that is complete in 2019, the second phase will renovate and upgrade the eastern portion of the building.

To view the new fly-through videos and images, and get more information on the details of the project, visit our NorthSTAR project page.

The Port of Seattle is working on more than $2 billion in near-term projects planned to accommodate growth for the future including NorthSTAR, new International Arrivals Facility, updated baggage system and a 20 year Sustainable Airport Master Plan.

For the past two years, Sea-Tac is the fastest growing large hub airport in the U.S. and is the 13thlargest domestic airport based on total passengers. Through July of 2016, traffic is up nearly 10 percent, after increases of nearly 13 percent in 2015 and 7.7 percent in 2014.

Operated by the Port of Seattle, Seattle-Tacoma International Airport (SEA, KSEA) is ranked as the 13th busiest U.S. airport, serving nearly 42.3 million passengers and more than 332,000 metric tons of air cargo in 2015. With a regional economic impact of more than $16.3 billion in business revenue, Sea-Tac generates 171,796 jobs (109,924 direct jobs) representing over $2.8 billion in direct earnings and more than $565 million in state and local taxes. Twenty-four airlines serve 83 non-stop domestic and 24 international destinations.