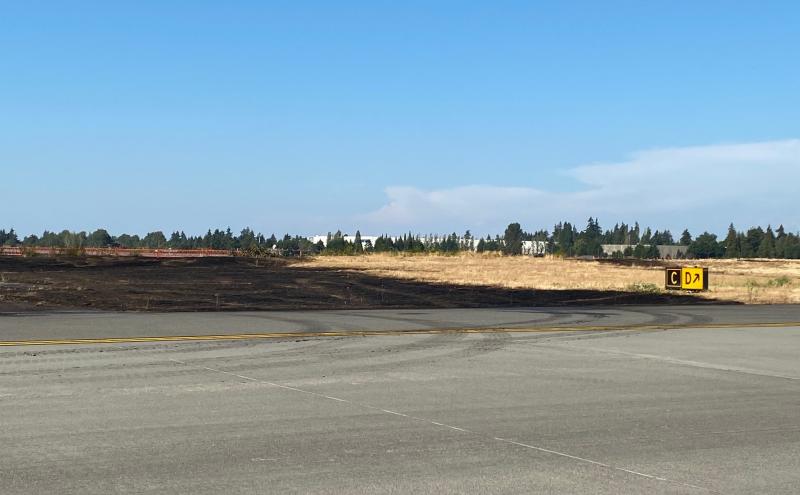 Brush fires in the summertime have become a regularly occurring hazard. However, it’s not often they flare up on Air Operations Area (AOA). On August 24, Port of Seattle Fire Department’s A Shift responded to a significant brush fire on the north end of the AOA.

If it wasn’t for their aggressive fire attack, awareness of the weather conditions, and fire behavior there could have been extensive damage to signage, lighting and runway equipment. If such damage would have occurred, there would have been major impacts to the operations of the flights coming in and out of the airport.

Battalion Chief Jake Murry stated in his report, “While I was approaching Cargo 2, I noted active fire spread up over the hill to the Runways and Taxiways. I decided to split the crews and send 2 ARFF units (Aircraft Rescue Fire Fighting vehicles) and Engine 302 to the North End of Perimeter Road for fire attack. Another 2 ARFF units and Command Vehicle 301 were going to commence fire attack on the AOA side of the fire. I requested and received clearance from Seattle Ground and Seattle Tower for operations in the fire area at the intersection of Taxiway Charlie and Taxiway Tango.”

Battalion Chief Murry established Airport Command, coordinated with the Tower, and requested two mutual aid engine companies to also respond to the brush fire. Their arrival was coordinated with Airport Ops, who escorted them to the scene.

They were able to knock down the fire spread within minutes. The entire incident was concluded and all vehicles were clear of the taxiways in just 65 minutes. All of the runway equipment and signage was saved from damage and normal airport operation continued thanks to their quick and coordinated efforts.