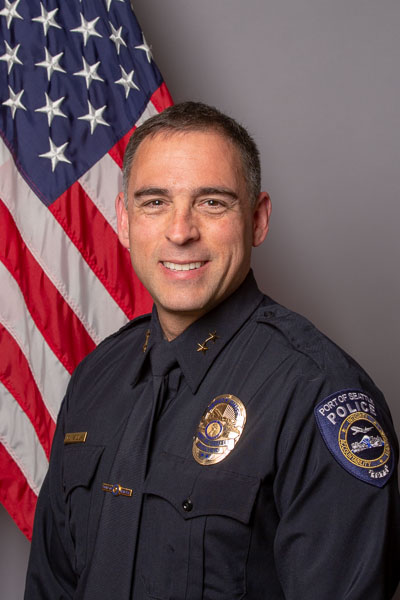 In August of 2022, Chief Villa was selected as the Chief of the Port of Seattle Police Department. This came after serving as Interim Chief since October 2021.

Chief Villa entered law enforcement in 1990 as a police officer with the Tukwila Police Department. In 1996, He was selected as one of two officers to implement the Department’s first community-oriented policing bicycle team. In 1998, he was promoted to Sergeant. He supervised patrol staff and then the Support Services/Crime Prevention Unit before being appointed as a Commander in 2001. During his six years as a Commander, he oversaw and led the Investigative Services Division, Training, the Valley Regional SWAT Team, and the Patrol Division. He was appointed as an Assistant Chief of Police in 2007, where he led both the Patrol Division and the Investigations Division, respectively. In June of 2011, he was sworn in as the Tukwila Chief of Police. In October of 2017, he became a Deputy Chief of Police for the Port of Seattle. He served as the Services Bureau Deputy Chief. In June of 2020, he accepted the position as the Acting Chief of Police. In October of 2021 he became the Interim Chief of Police.

Chief Villa enjoys teaching and developing others and has instructed SWAT command and supervision for the National Tactical Officers Association at a national level and several other leadership courses and seminars for various organizations. He represents the Northwest region on less lethal issues on the International Law Enforcement Forum and has worked with the National Institute of Justice on its Tactical Technical Working Group. He is an active member of the King County Police Chiefs Association and the Washington Association of Sheriffs and Police Chiefs. He is a graduate of the FBI National Academy, the Police Executive Research Forum Senior Management Institute for Police, and the International Association of Police Chiefs Leadership in Police Organizations. He holds a Bachelor of Science in Business Administration from Central Washington University.

Chief Villa has a long history of community policing and problem solving. In the 1990s he was instrumental in starting the Tukwila citizen foot patrol program and opening a neighborhood resource center. He brought together the school district and city in 2010 to file jointly for a Secure our Schools grant that increased safety in the middle school with upgraded video cameras and an electronic key card access system. In 2012, he worked with Tukwila elected officials and city leaders to open a neighborhood resource center, and implemented a crime reduction initiative focused on hot spots and chronic offenders. In 2018, he worked with state and regional law enforcement partners to execute an interlocal agreement that secured Port participation on the Auto Theft Task Force. In 2020 and 2021, he initiated and negotiated agreements with SCORE and SeaTac Municipal Court, respectively. These agreements provided critical tools for public safety at the airport.

Chief Villa grew up in Tukwila and the SeaTac area. Prior to his law enforcement career, he enlisted in the United States Marine Corps Reserve. In 1991, he deployed to Saudi Arabia during Desert Storm. He and his wife of 37 years, Peggy, have four children and nine grandchildren.

Chief Villa feels very fortunate to have served in law enforcement for thirty-two years and contribute to officer and community safety on a local, regional, and national level. He is committed to providing excellent, professional service and continuing to improve the organizations and spheres in which he serves. 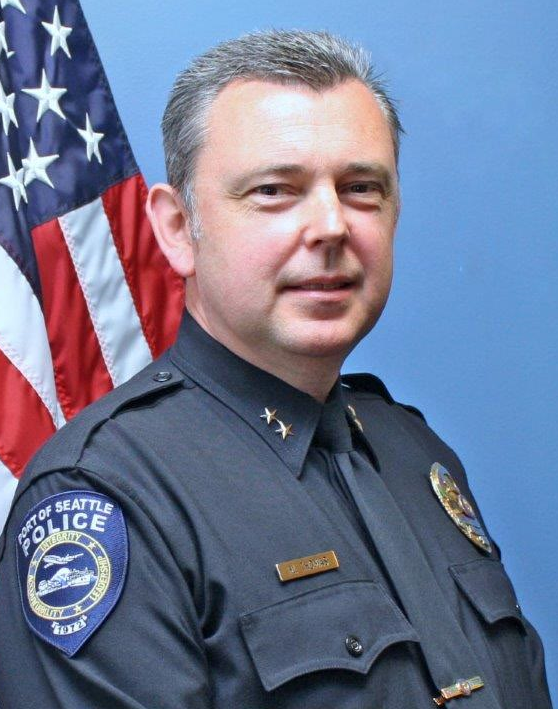 Mark Thomas joined the Port of Seattle Police Department in September of 2013 after serving two years as the Chief of the Medina, WA Police Department. Mark previously spent 26 years with the Washington State Patrol (WSP) including nine years as a Division and District Commander. Mark’s assignments included five years as the Homeland Security Division Commander and more than four years as a District Commander overseeing WSP field operations in seven counties.

Mark graduated with a Bachelor of Science Degree in Business Administration from Central Washington University and earned a Master of Arts Degree in Security Studies/Homeland Defense and Security from the Naval Postgraduate School in Monterey, CA.