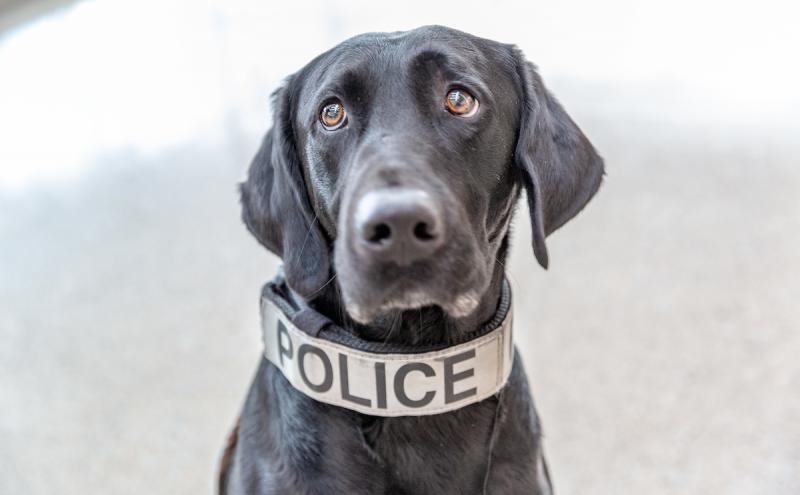 When you’re traveling through Sea-Tac Airport, you may have noticed dogs patrolling the ticketing area or working in the terminal. These four-legged police officers are well-loved by travelers and airport employees alike, but did you ever wonder what they actually do all day?

These cute canines are working professionals and aren’t here to play. They are on the hunt for explosives at the airport and seaport and play a key role in keeping facilities, employees, and travelers safe. Their speed and flexibility in uncovering explosives and their ability to follow suspicious odors often give them an edge over mechanical detection devices.

1.    Canines and their handlers are like family
It takes anywhere from 18 months to two years for a handler and the dog to bond to the point where the handler can read the subtleties of their dog’s behavior. When an officer is paired with a canine, they are taking on more than a new coworker or partner at work. They patrol together, take lunch breaks together, and at the end of the shift, they head home together. Canines spend time away from work living the life of a typical dog — napping, playing, chasing sticks, and relaxing with the family. The partnership doesn’t end when a canine retires from life as a working dog. After retirement, the canine lives at home with the handler full time. 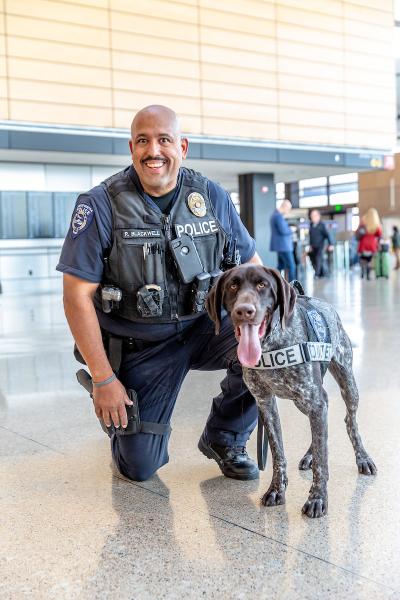 2.    Canines train every day to keep their skills fresh
As with anything, practice makes perfect. Canines have a big job in keeping us safe and the Port of Seattle Police Department takes that very seriously. The current group of canines bring a wide range of experience to the Port, from just a few months to over seven years of experience.  Regardless of experience level, all canines train to maintain and improve their skills.

What does canine training look like? Handlers and canines train throughout the airport and seaport to ensure that sniffing out a threat is second nature. They practice on and around aircraft, in warehouses, waterfront cargo, vehicles, and through open fields to keep them efficient and effective.

Eight of the Port’s canine teams were trained at the Transportation Security Administration canine training center at Lackland Air Force Base. There, dogs are trained to sniff stationary objects for explosives. The Port’s other three canine teams are Air-Scent-trained, which means they detect odors on a moving target — they search whatever moves. POSPD is the first law enforcement agency in the state to have certified working Air-scent teams. Three more Air-scent teams are slotted to join the force on May 20.

Also, just like many of us work for a paycheck, canines work for a reward. Canine handlers figure out what makes their pup happy, like playing with a toy or receiving attention, and every time the dog is successful in tracking a scent, they are rewarded.

The POSPD decoy program allows Air-scent-trained dogs to practice on volunteers who walk through the airport carrying luggage.

3.    Dogs’ sense of smell is so sensitive that handlers must design training activities that continue to challenge the canines
Dogs are smart enough to remember the unique scent of a volunteer long after their work as a decoy is over. To avoid this and to maintain the integrity of the training, volunteers must wait a month after volunteering before signing up again.

Once a bag or piece of luggage is used as part of a decoy training, POSPD must destroy the bag because the dog will always be able to track the scent of explosives long after it is used as a decoy.

Because a piece of luggage can only be used once in the training, the department goes through around 100 bags a year. Having a supply of bags to train with is important. A local luggage manufacturer in Kent donates luggage with minor defects to train the police dogs. 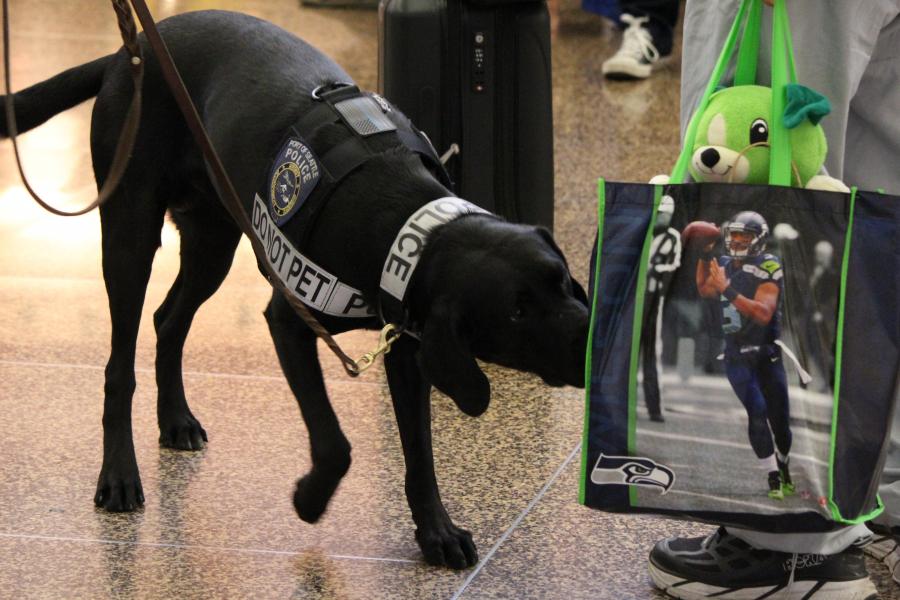 4.    Despite being a relatively small police agency, Port of Seattle canines travel far and wide to ensure public safety
Canines work in and around the Port of Seattle facilities and assist both regional police agencies and federal partners. They have traveled to California and Georgia to assist with national football championships and have gone to Washington D.C. for the Presidential inauguration.

They also attend children’s events such as Make-A-Wish®, the American Airlines Snowball Express, the Delta Airlines North Pole Fantasy Flight, and Chief for a Day. Like the other officers in the department, canines work hard to keep us safe and serve as community ambassadors.

Because canines and handlers spend so much time together, handlers are matched with canines with similar personalities, and a compatible home life and energy level. 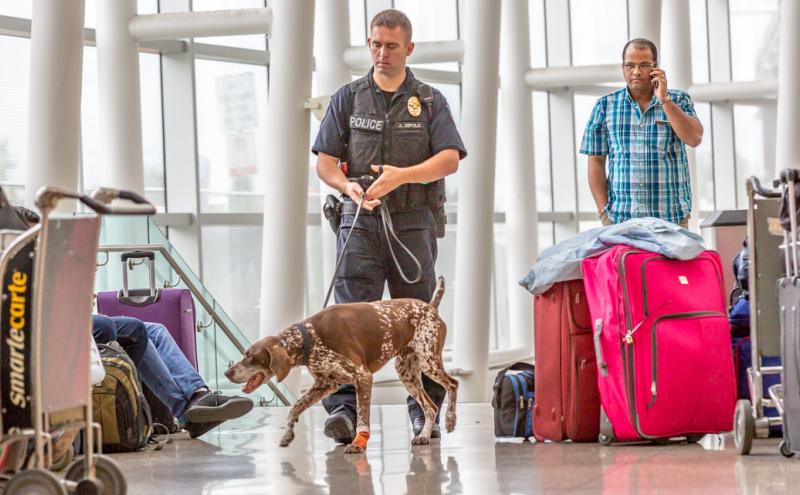 Police Department canine Hugh and his handler, Officer Andrew Depolo, take some time each day to go through training exercises that keep Hugh ready to respond to a variety of situations. Hugh is an... 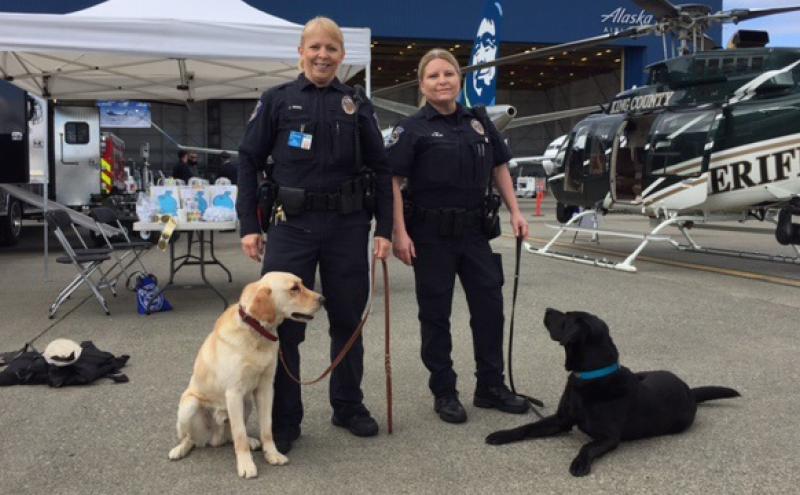 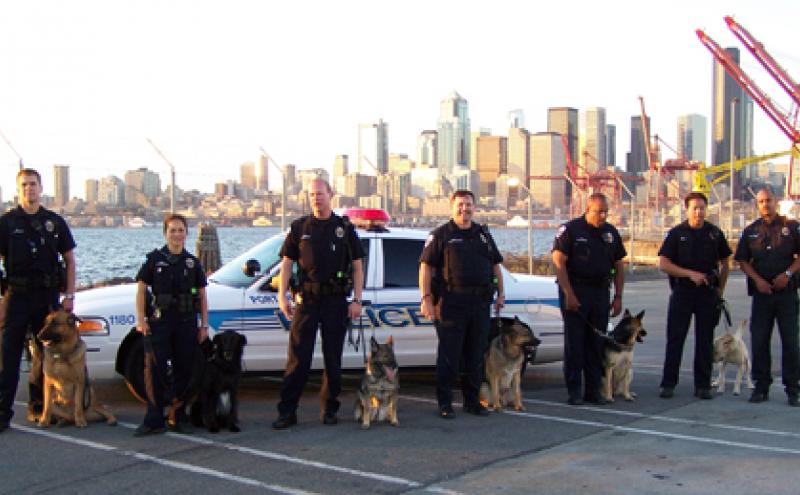 The Port of Seattle Police Department is comprised of an Administrative Bureau and a Patrol Bureau. Several divisions within these bureaus ensure the safety and security of passengers and Port of Seat... 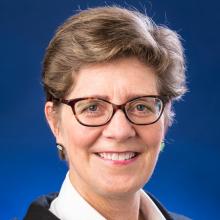