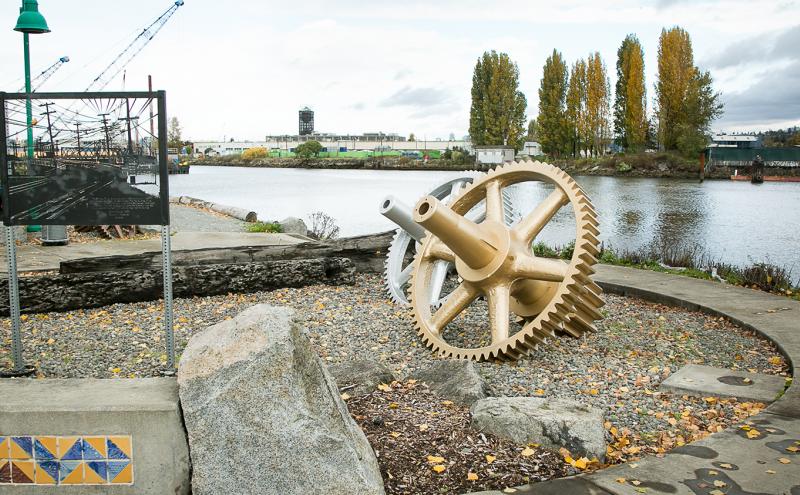 Map & Directions
7740 8th Ave South | Seattle, WA 98108
Latitude, Longitude
47320° 0' 0" N, 122192° 0' 0" E
General Information
The 17,500 square-foot t̓ałt̓ałucid Park and Shoreline Habitat, formerly 8th Ave. South Park, include more than 200 feet of public shoreline access, a gravel walkway with a hand-carried boat launch via concrete steps to the river, park benches, picnic tables, and lighting. These features make this hidden gem an ideal site to launch your small boat, canoe, or kayak on the river, or to have an impromptu picnic lunch. Large metal gears pay homage to its community bridge history, and since 2008, the site has been a Salmon Safe-certified park. In 2016 it was one of several hosts to the "Duwamish Revealed Arts Festival" art exhibit. The park now boasts a permanent community youth-designed ceramic tile public art installation.

(tathtathootseed, “t-ahth-t-ahth-oots-eed”: Where there is something overhead, across the path / A description of logs or branches located above a path or trail)

The site of a former swing bridge that connected South Park and Georgetown is now a favorite lunch spot for local workers and residents. From this site, you can watch industrial maritime vessels like barges and tugboats float by, as well as observe waterfowl, and other wildlife. Tribal fishers exercise their Treaty rights nearby and harvest adult returning salmon in this area along the river. 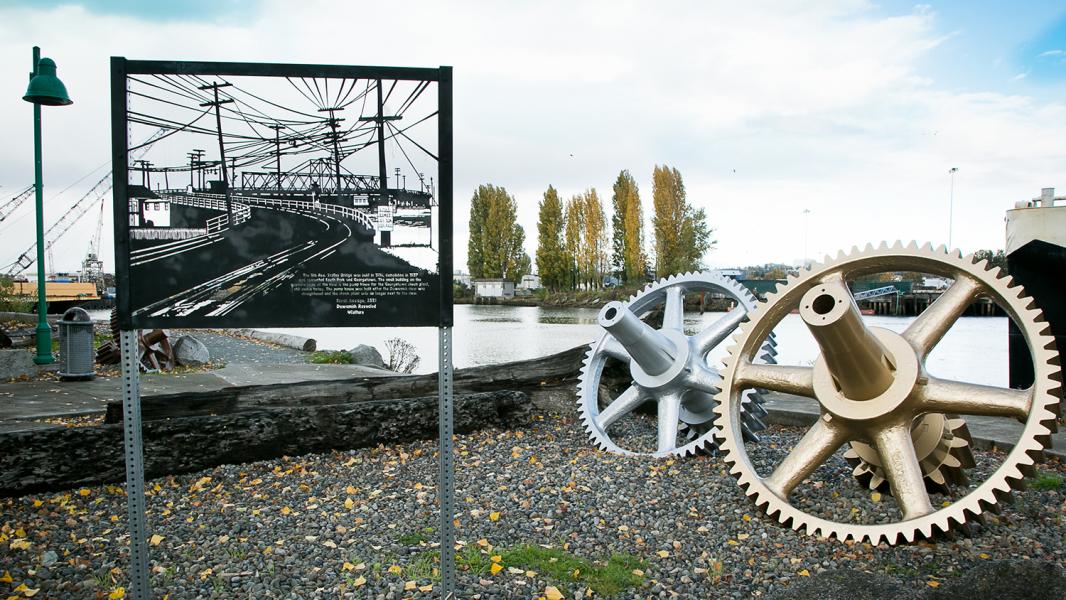 This park is on the ancestral site of the Indigenous water-related place landmark, t̓ałt̓ałucid (tallu-TALLU-utseed) “Where There is Something Overhead Across the Path”, referring to a place where there were tree trunks and dead timber. Coast Salish people sustainably managed habitats along the Duwamish River and harvested food, materials, and medicinal ingredients from hundreds of plants and animals in the area. This site was once the south bank of a tightly meandering river channel. People in extraordinary cedar canoes would travel up and down the river past this site. Directly south was a mythological place, ʔəč̓qsačiʔ (ech-KSA-chee ) “Fingers Pulled”, a bad place where the Transformer turned two men who had been fighting into trees. This area was likely near a large flat in a bend of the river’s estua 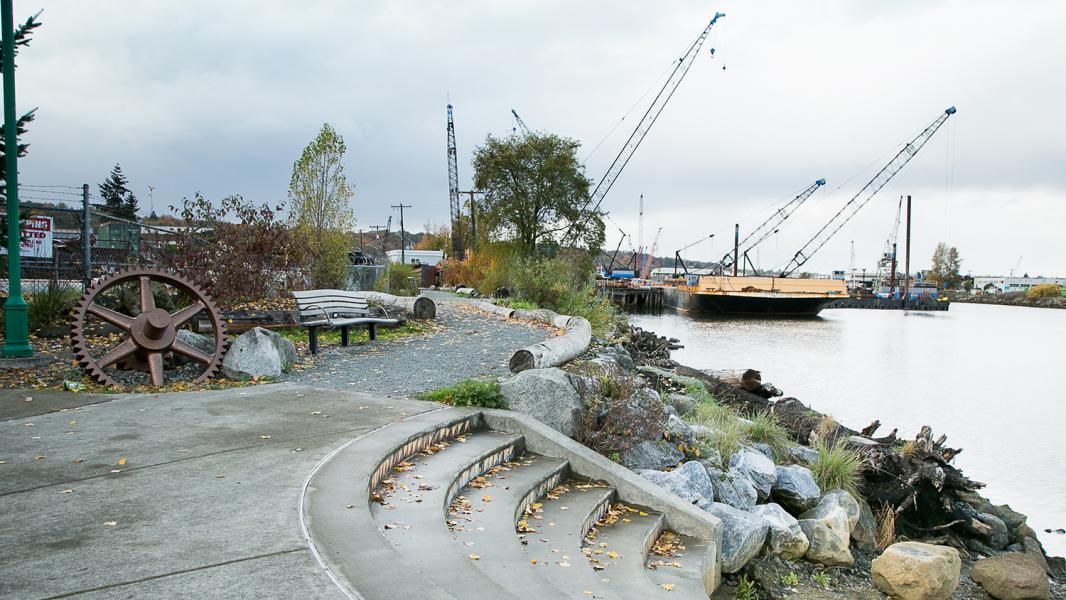 In 1851, American and European immigrants to this area established the first non-native settlement in the Duwamish Valley. As the city grew, the Duwamish River was straightened and deepened to facilitate a growing economy and maritime industry. From 1915 until 1931 a wooden swing bridge operated here that connected the communities of South Park and Georgetown along 8th Avenue. This route provided a continuous link to the city, allowing horse-carriage transport of South Park farm produce from Italian and Japanese farmers to Pike Place Market. The bridge later supported a streetcar trolley service but was eventually demolished (1938) and a bridge for motor vehicles was constructed further south where the South Park Bridge is today.

During the 1940s to 1970s, this area experienced great industrial and residential growth due to Boeing’s increased operations across the river and other riverfront industries moving in. This transformation is also linked to the community’s experience with discriminatory practices such as redlining, based on racial and socio-economic prejudices, that discouraged local government investment in essential public infrastructure. These factors and industrial changes along the filled-in area of the Duwamish River, led to the transformation of South Park and Georgetown from rural farming communities to urban, hybrid neighborhoods with industrial facilities. These changes contributed to negative effects on air, water, and other environmental issues still impacting the community today. In addition, during the Second World War, generally from 1941 to 1946, residents with Japanese heritage from the Duwamish Valley were tragically displaced and sent to internment camps; further transforming the cultural makeup of the community and the local economy.

In 1985, the Port prepared the Comprehensive Public Access Plan, which identified public shoreline access and environmental restoration opportunities for the Port to implement, coincident with new marine cargo terminal development. This site was identified in the 1985 plan and was made possible by Port development in the East Waterway. The Port completed the park and habitat area you see today in 2007, as a measure to offset the effects of marine industrial development in southeast Elliott Bay, nearly 3.5 miles downstream. The formerly unstable, rubble-filled bank-line was reshaped and stabilized using native vegetation, anchored large-wood, and rock terraces. These features now provide marsh habitat that offers shelter and food for migratory fish and birds.

Across the river you can see the historic Georgetown Steam Plant Pump House. For over twenty years, neighbors, including the Georgetown Open Space Committee, advocated for its designation as a historic landmark. The community was successful in December 2019, when the City of Seattle officially granted the Pump House structure landmark status. 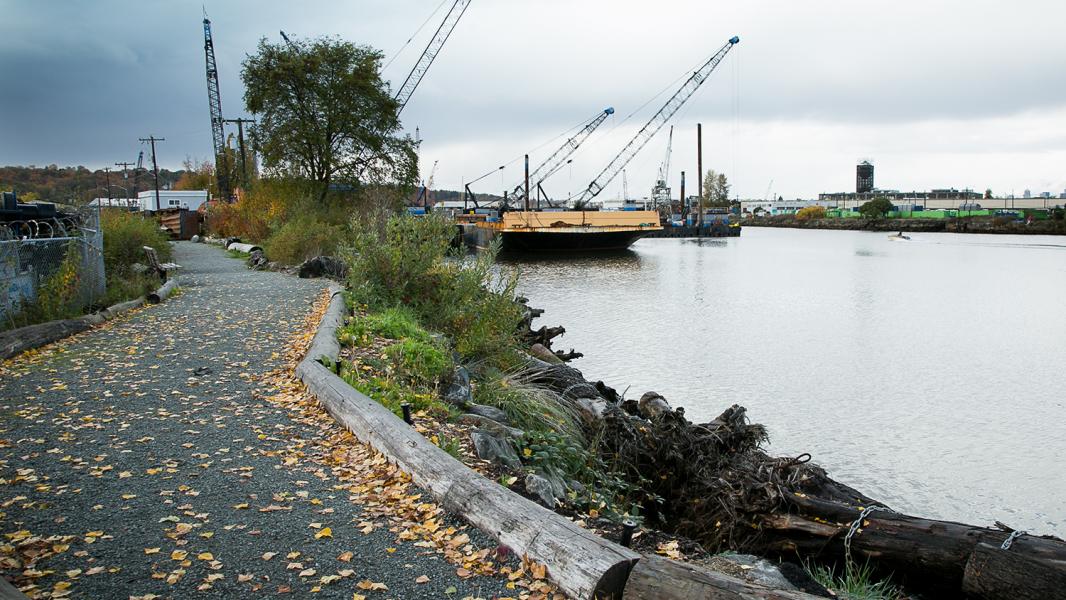 Buerge, D. M. (2020). Historian and Author, "Chief Seattle and the Town That Took His Name: The Change of Worlds for the Native People and Settlers on Puget Sound". (G. Lee, Interviewer) Seattle.