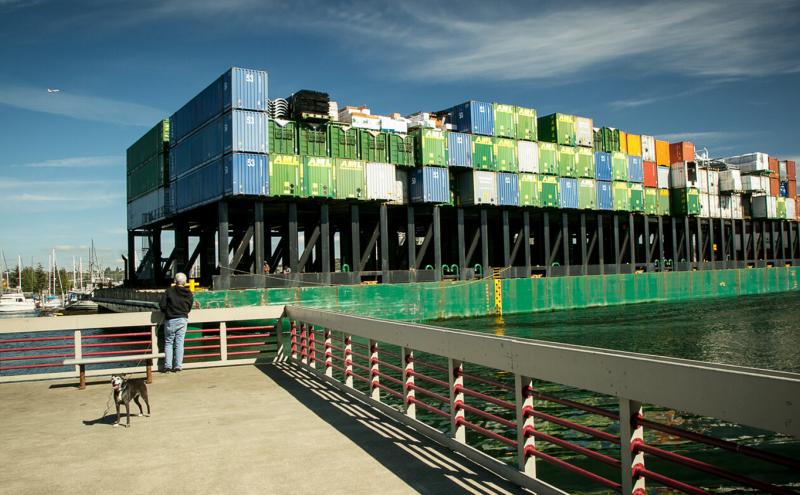 Map & Directions
4260 W Marginal Way SW | Seattle, WA 98106
Latitude, Longitude
47343° 48' 0" N, 122213° 0' 0" E
General Information
t̓uʔəlaltxʷ Village Park and Shoreline Habitat, formerly known as Terminal 105 Park, off West Marginal Way S.W. near West Seattle, offers a 50 foot fishing pier and a sweeping view of the Duwamish River estuary. A creek runs along the south side of the 1.2 acre park, emptying into the Duwamish. In addition to three picnic tables and a covered gazebo, the park has 220 feet of shoreline access where adults and kids alike can watch machinery and boats in action immediately to the north. Hours are from dawn to dusk.

(Toolalt, “t-oo-ah-lal-too-wx”: Herring’s House / A description of where herring live and spawn / Name of an old village site on the west bank of the Duwamish River)

Turning off West Marginal Way SW just south of the West Seattle Bridge, you can enter into this hidden gem park offering a fishing pier, picnic areas, water access, and a robust shoreline habitat area thanks to over ten years of volunteers who have worked to restore this small but mighty resting ground for migrating wildlife.

This site is where a main channel of the original Duwamish River split into many channels, slowed down, and mixed with tidal bay saltwater to form 1200 acres of habitat rich marshy area. This site is located between the large Indigenous village of tla’ltu (tol-AHL-tu), “Herring’s House” to its northwest and the village of yile’qwud (yee-LU-kwuud) “Basket Cap” to its south, which refers to the type of basket-cap worn by the Yakama people. The area is also near a small stream known as “Draining Creek over Flat Lands.” Archaeological material buried below 12 feet of historic fill suggests tla’ltu or “Herrings House” extended at least to the intersection of 17th Avenue S.W. and 16th Avenue SW just south of the West Seattle Bridge.

Tla’ltu, or “Herring’s House” village was burnt down in 1893 by settlers looking to advance their land holdings during expansion into West Seattle. In the first decades of the 1900s the river and estuary was straightened and deepened to facilitate industrial uses. Early city engineers created an artificial island in 1909 called Harbor Island using sediment from downtown construction and the river’s bottom. When looking north from the Terminal 105 shoreline, you can still see this island that, at the time, was the largest artificial island in the world.

One hundred years ago, this portion of the river was busy with traffic related to maritime industries such as shipbuilding, warehouses, and metals and oil processing. Previous industrial activities, operating without environmental regulations, contributed to water pollution and contaminated soil in this area. The Port purchased the shoreline and upland industrial site in the early 1970s. Terminal 105 Park formerly served as storage and warehouse area for the steel industry. The site also included a small commercial moorage, the “Riverside Marina” and a collection of floating houses, one of which was occupied by Richard Hugo, famous Seattle poet and writer. 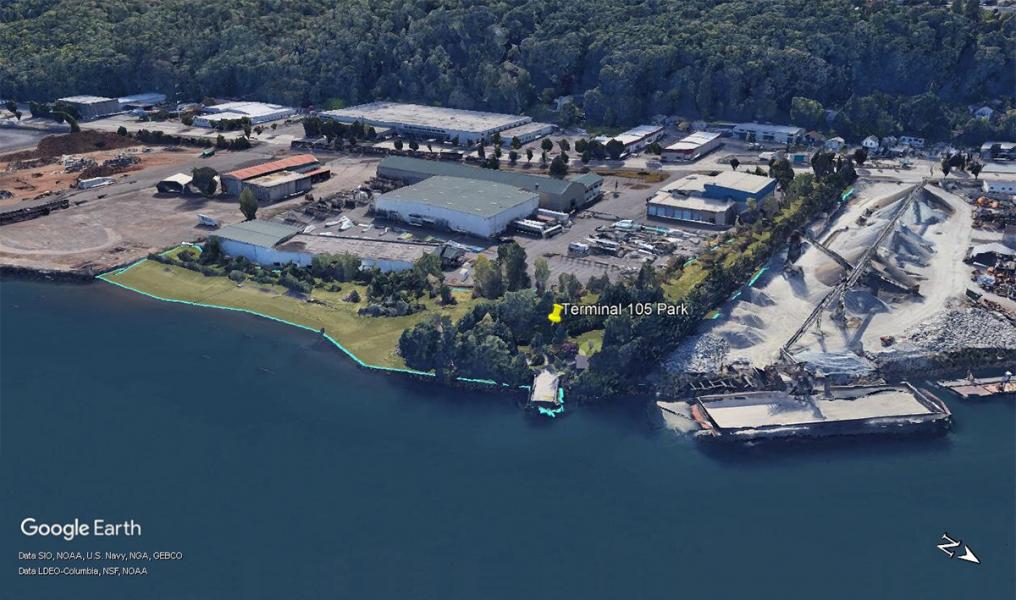 Terminal 105 Park is the Port’s first public shoreline access site identified in the Port’s landmark 1985 Comprehensive Public Access Plan. It was constructed in 1986 as mitigation for the Terminal 5 container cargo facility.

From 1997 to 2012 the Port of Seattle added fish and wildlife habitat restoration features. Along the entrance driveway, a habitat channel was dug perpendicular to the shoreline so that the channel fills and empties with each daily tide cycle. The slough, or marsh next to the river, slopes very gradually from the river up to the land like a slide, providing nooks and crannies so aquatic wildlife can hide from predators. The park mimics the natural beauty of creeks and side-channels that were once abundant in the original Duwamish estuary. 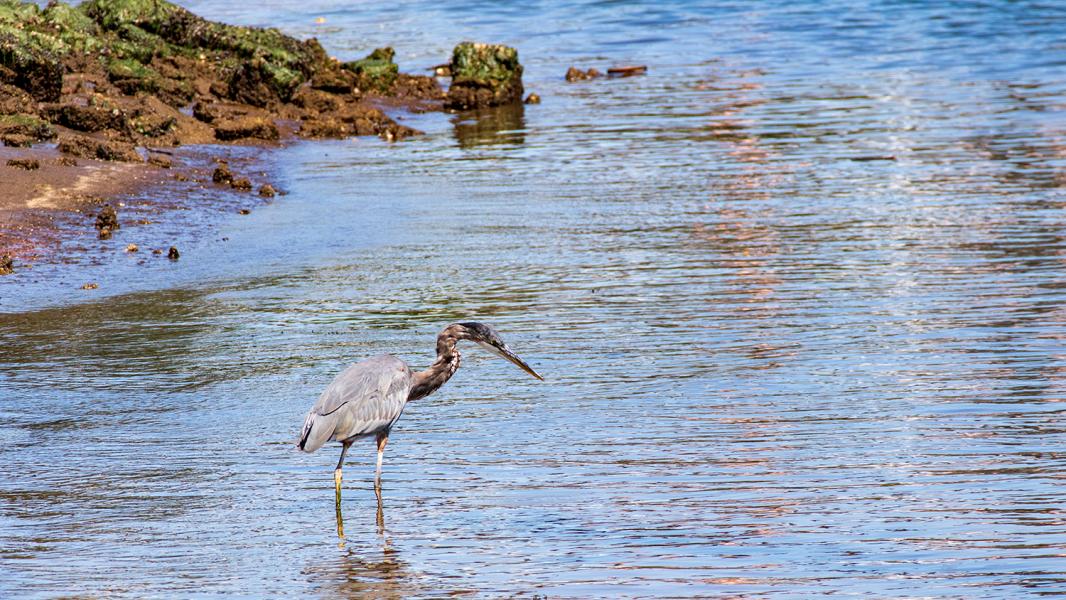 Starting in the 1990s, volunteers with the environmental non-profit People for Puget Sound organized habitat work parties regularly at Terminal 105 Park. Volunteer activities continued under the leadership of EarthCorps. Since 2016, this park has served as a hands-on learning lab for the Port of Seattle’s summer youth interns to gain skills in green job pathways related to river habitat stewardship and environmental education.

Community members, including recently arrived immigrants, often use the site’s fishing pier for subsistence fishing. In the Duwamish River, the seafood that spend their entire lives in the river (perch, sole, flounder, crab, mussels and clams) are unsafe to eat because of their long exposures to toxic chemicals, but migrating salmon are safe. Using this fishing pier and others, Seattle/King County Public Health's Community Health Advocates engage with the local Cambodian, Vietnamese, and Latinx communities to promote safe seafood consumption. 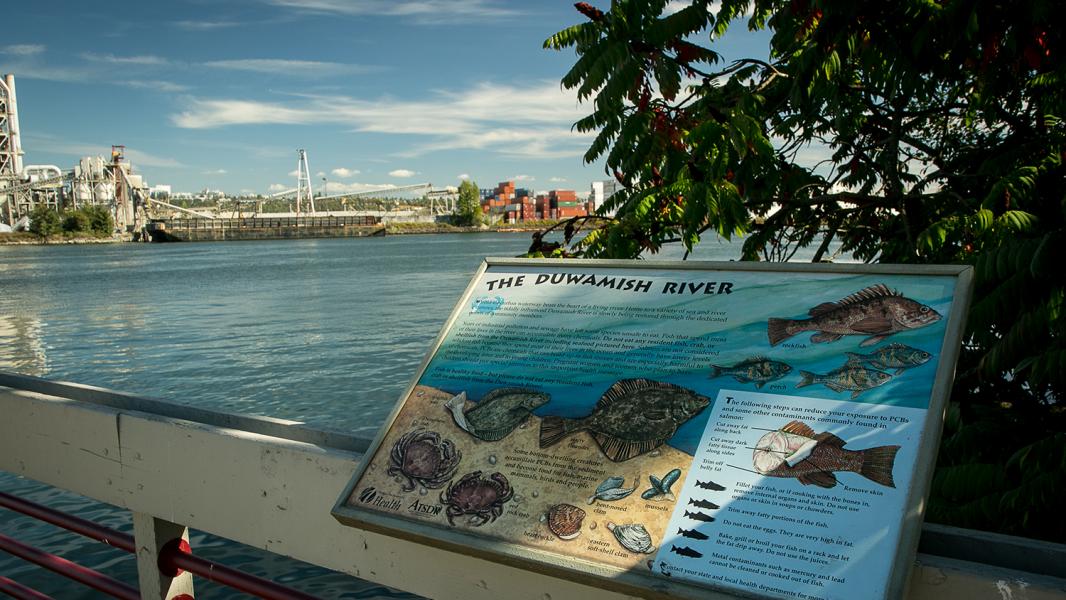